At the time of the Arab Invasion of Bactria in the 800's AD, there was a strong north-eastward migration into Khotan & the Tarim River Basin..... 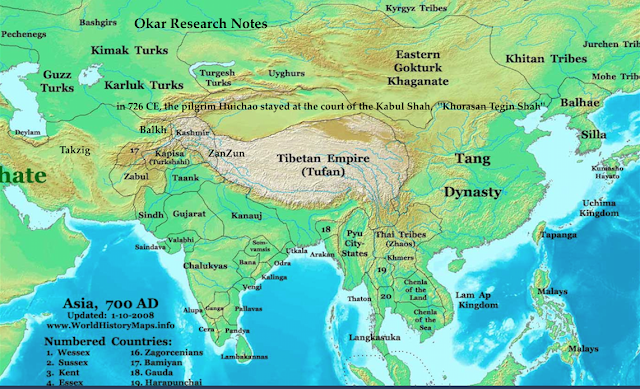 "One travels north to the region of Khotan (Li Yul). Nearbye is the Tarim River (Shing rta---Sita) which flows from west to east. In this region live the Uighurs (Hor). North of the Tarim lie the Tian Shan mountains that make up the southern boundary of Shambhala." (Cabezon: 1996...pg 488)...


"The Tarim River in East Turkestan. Thus 'Shambhala' could be a special name for the Uighur Kingdom centered at Khocho that flourished circa 850-1250." (Newman...1985)


"In a unique ninth century manuscript found at Dunhuang, called Huichao wang wu tianzhuguo shuan (Account of Huichao's Journey to the Five Lands of India)...Around 726 AD a Buddhist monk from Silla (Korea?) named Huichao travelled in the region of Balkh.......After coming to India from China by sea, Huichao made his way through much of India, and then travelled over the Hindu Kush into Tokharistan before returning to China overland through the Tarim basin. In the time since Xuanzang's visit (629-645 AD), Arab armies had conquered all of the Persian Empire and had been making war on Tokharistan for a long time....In 725 AD the Arab garrison had been moved into Balkh proper, as Arab sources tell.........

"870 A.D. marks the first time that the KINGDOM OF SHAMBHALA actually came under Moslem domination. The Hindushahis recaptured Kabul and the rest of their Kingdom after the death of the conqueror Yaqub but never again maintained Kapisa as their capital."......"In 672 an Arab governor of Sistan, Abbad ibn Ziyad, raided the frontier of Al-Hind and crossed the desert to Gandhara, but quickly retreated again. The marauder Obaidallah crossed the Sita River and made a raid on Kabul in 698 only to meet with defeat and humiliation. Vincent Smith, in Early History of India, states that the Turkishahiya dynasty continued to rule over Kabul and Gandhara up until the advent of the Saffarids in the ninth century. ....Dharma Fellowship of His Holiness the 17th Gyalwa Karmapa, Urgyen Trinley Dorje.....http://www.dharmafellowship.org/biographies/historicalsaints/lord-padmasambhava.htm#eightcentury

"At the time of the Islamic conquest of Persia in the 7th century, however, Balkh had provided an outpost of resistance and a safe haven for the Persian emperor Yedzgird who fled there from the armies of Umar. Later, in the 9th century, during the reign of Ya'qub bin Laith as-Saffar, Islam became firmly rooted in the local population."....http://en.wikipedia.org/wiki/Balkh

"Arabs occupied Persia in 642 (during the Caliphate of Uthman, 644–656 AD). Attracted by grandeur and wealth of Balkh, they attacked it in 645 AD. It was only in 653 when Arab commander, al-Ahnaf raided the town again and compelled it to pay tribute. The Arab hold over the town, however, remained tenuous. The area was brought under Arabs' control only after it was reconquered by Muawiya in 663 AD. Prof. Upasak describes the effect of this conquest in these words: "The Arabs plundered the town and killed the people indiscriminately. It is said that they raided the famous Buddhist shrine of Nava-Vihara, which the Arab historians call 'Nava Bahara' and describe it as one of the magnificent places which, comprised a range of 360 cells around the high stupas'. They plundered the gems and jewels that were studded on many images and stupas and took away the wealth accumulated in the Vihara but probably did no considerable harm to other monastic buildings or to the monks residing there"......http://en.wikipedia.org/wiki/Balkh

"The Arabs could bring Balkh under their control in 715 AD only, in spite of strong resistance offered by the Balkh people during Umayyad period. Qutayba ibn Muslim al-Bahili, an Arab General was Governor of Khurasan and the east from 705 to 715. He established a firm Arab hold in lands beyond the Oxus. He fought and killed Tarkhan Nizak in Tokharistan (Bactria) in 715. In the wake of Arab conquest the resident monks of the Vihara were either killed or forced to abandon their faith. The Viharas were razed to the ground. Priceless treasures in the form of manuscripts in the libraries of monasteries were consigned to ashes. Presently, only the ancient wall of the town, which once encircled it, stands partially. Nava-Vihara stands in ruins, near Takhta-i-Rustam."......http://en.wikipedia.org/wiki/Balkh

PAMIRS & Hindu Kush: Numerous city-states and fortresses with names beginning with 'Kala' ('Quallah'), all traces of which seem to have 'completely disappeared'...A extremely rich mixture of Shambhalians of all spiritual and cultural traditions....The entire region was considered a "Pagan Enclave" by the Arab mapmakers. Tremendous silk route influences. Crossroads between the Indian Tantric traditions moving northward and the Vedic Mithraic traditions of Persia. Tazik. Bon moved into Tibet via this region. Padmasambhava. Early teachings of Dzogchen in the Bon and Nyingma traditions appeared here in the 8th century AD.

"One travels north to the region of Khotan (Li Yul). Nearbye is the Tarim River (Shing rta---Sita) which flows from west to east. In this region live the Uighurs (Hor). North of the Tarim lie the Tian Shan mountains that make up the southern boundary of Shambhala." (Cabezon: 1996...pg 488)...


"The Tarim River in East Turkestan. Thus 'Shambhala' could be a special name for the Uighur Kingdom centered at Khocho that flourished circa 850-1250." (Newman...1985)

624 AD....."In 624 AD, a Moslem invasion weakened the Kingdom of Shambhala."(Roerich: 1974..pg 753) (Geoffrey Hopkins: 1985..pg 60)...Muhammad died in 632 AD, beginning an expansion of the Muslim Empire in central Asia...In 624 AD the Sassian Shah Yazdigird is defeated by the Arabs at the battle of Nahavand...In Iran, the great Sassanian dynasty collapsed in the 7th century under the Arab onslaught...."in the era of the Mlecchas, the starting year of the Kalacakra chronology is the first year of the Hijra, calculated from the year 624 AD."..(Roerich:1949...pg 753)...."In 580 AD the Turks assailed Sassanian Persia from the East and weakened it which led to the triumph of Islam a few decades later. The surprise and defeat of the Sassanian Shahr-Baraz in 624 AD." (Langer: Ency World History:1940)...."622 AD is the first year of the new Mohammedian era according to the Islamic tradition...

"According to the 'Bro tradition, the Kalachakra was brought to India during the reign of Kalki Shripala. He taught to Kalachakrapada (who had been born in North Bengal). The Kalachakra system first appeared in India at the beginning of the 11th century. (1012 AD). This dates forms the basis for all the astronomical calculations in the Kalachakra laghukaranam." (Newman...1985)

18. TENTH KALKI KING.....Gyatso Namgyal...Beginning of the Fire Sky Ocean era.......10th rigden is Samudraavijaya. He sits on the throne, having taught the Dharma, for 182 years. After the 10th rigden, Gyamtso Namgyal comes to the throne, he teaches the Dharma for 182 years. Those are recorded as his years on the throne In the year of Gyamtso Namgyal coming to the throne, the Lalos teach that their formula astrology begins with the 7th outsider Lalo teacher. He is the teacher of it.........The outsider formula astrology begins from the 1st year of Gyamtso Namgyal coming to the throne.....According to year counted as that of the main teaching of the Kaalachakra Tantra, 500 years later is the year of Samudraavijaya going to the throne, and not far from that, the time of King Songtsen Gampo.....Samudra Vijaya, Gyatso Namgyäl (827-927) Annihilator of all types of Devils.....Some say that Samudraa and Vijaya, or Gyamtso and Namgyal, in the case of the 10th rigden Samudravijaya/ Gyatso Namgyal, should be counted as different, so that 25 rigdens are produced;

19. ELEVENTH KALKI KING......Aja......Gyal Ka.....(11th Kulika King): "Rigden rgyal dKa (11th Kulika Durjaya) introduced the lesser Kalachakra chronology in 806 AD." (Roerich: 1974..pg 754)..
.........Durjaya/Aja, Gyälka (927-1027) Who binds with Unbreakable Iron Chains ......11th rigden is Aja. He sits on the throne and grasps the leadership of action. He sits on the throne 221 years, after he teaches the Ddharma,...After that, Rigden Gyalka comes to the throne and teaches the Dharma for 221 years. ...The 7th teacher of the Lalos, Madhumati, [[often identified with Mohammed]] can be fully established. By the lord of the Lalos, their leader or guru, Madhumati, the year when the formula astrology began, 403 is diminished by lag pa gdengs can zla ba, 182. That is the year when the formula astrology of rigden Gyalka began. Like the formula astrology produced by rigden Gyalka, this tantra also will be taught in the future.

TWELTH KALKI KING......Surya....Nyima (Who was the 12th Propagator...Kalachakra to India during the 12th Propagator)...He ascended the throne in the year 1027 AD...and the first Rabjung began then in Tibet.....Surya [nyi ma]....12th rigden, Surya, comes to the throne. In this year the 1st Rabjung of the conventional system begins with the Fire Rabbit year, and after that, the 403 years of the Lalos entering "me mkha'a rgya mtsho" [403 years] as above, begin with the Rabjung count....From Nyima there are 14 rigdens.....In the year of rigden Nyima coming to the throne, the Kaalachakra Abridged Tantra goes to the noble land of India. The astrological conventions of the 1st rabjung etc. are also engendered. The formula astrologers who first calculate the years of the rabjung are as well known as the 1st planet, the sun. That is 403 years from the beginning of the formula astrology. "Me mkha'a rgya mtsho", 403, equals the number of years that Gyamtso Namgyal and Gyalka are on the throne of Shambhala