"Khezr.......(Khidr)..... one of the four prophets whom the Islamic tradition recognizes as being ‘alive' or ‘immortal'. The other three being Idris (Enoch), Ilyas (Elias), and ‘Isa (Jesus). Khidr is immortal because he drank from the water of life. There are some who have asserted, however, that this Khidr is the same person as Elijah. He is also identified with St. George. 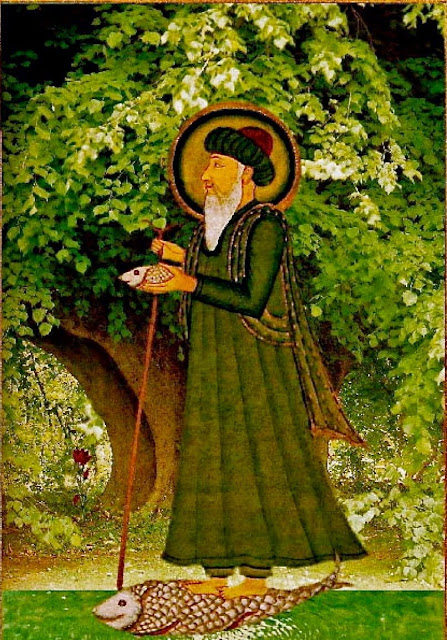 "Padmasambhava is regarded as the second Buddha in Bhutan and Tibet by followers of the Nyingma school, where he is better known as Guru Rinpoche ("Precious Master"). He has also been called Arunagiri Babaji. Like Khezr, Guru Rinpoche appears to each individual human being in a unique way, in the form that fits in with their spiritual world-view. Therefore, in one sense, Guru Rinpoche has as many biographies as there are people on Earth. Some have speculated that not only are these two myths of Khezr and Guru Rinpoche similar, they are in fact, one being.".....http://home.earthlink.net/~drmljg/id17.html

"Khezr is the embodiment of the hadith 'Three things of this world delight the heart: water, green things, and a beautiful face.' He is also, as we shall see, the very patron and personification of Sufi travel.".....Some have identified Khezr with St. George -- but he might more accurately be seen as both St. George and the dragon in one figure. Nature, for esoteric Islam, does not need to be pinned down like some biology specimen or household pest -- there exists no deep moral struggle between Nature and Order in the Islamic worldview. The "spirits" of Nature, such as Khezr and the djinn -- who are in sense the principles of natural power -- recognize in the Muhammadan Light that green portion of the spectrum upon which they themselves are also situated. If Christian moralism "fixes" Nature by "killing it," Islam proceeds by conversion -- or rather, by transmutation.".....http://www.kheper.net/topics/mythology/Khezr.html 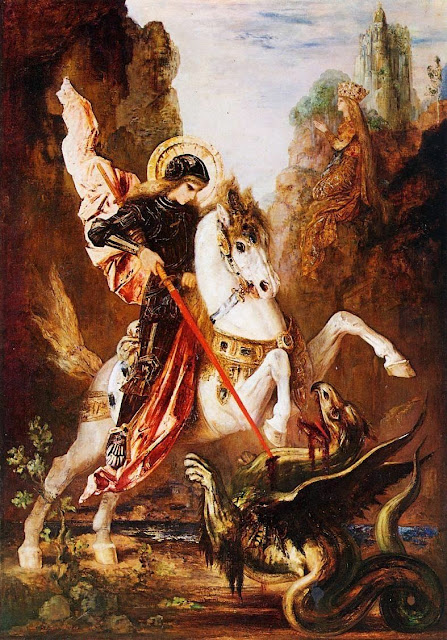 "Khidr. In Islamic folk literature, one finds a variety of names and titles asso­ciated with Khidr. Some say Khidr is a title; others have called it an ephithet. He has been equated with St. George, identified as the Muslim "version of Elijah" and also referred to as the eternal wanderer.Scholars have also called and characterized him as a ‘saint', prophet-saint, mysterious prophet-guide and so on."....http://khidr.org/khidr.htm

"Kheper, or (Xeper) is a transcription of an ancient Egyptian word meaning to come into being, to change, to occur, to happen, to exist, to bring about, to create, etc. Egyptologists typically transliterate the word as ḫpr. Both Kheper and Xeper possess the same phonetic value and are pronounced as "kheffer". Kheper is the root of the name of the Egyptian deity Khepri.".....http://en.wikipedia.org/wiki/Xeper

"Khephir (also Kheper or Khepera or Khepri) was the Egyptian patron god of the sun, creation, life and resurrection. This god appeared as a scarab-headed man, a scarab or a man wearing a scarab as a crown. In some funerary papyri, he is shown as a scarab in a boat held aloft by Nun. In Petosiris Tom at Tuna el-Gebel, the god is shown wearing an atef crown of the god Osiris.....We known of Khephir from at least the 5th Dynasty (2494-2345 BC) from a pyramid text that invokes the sun to appear in the name of Khephir. However, he may have been one of the very earliest gods of Egypt, yet there is no record of him having an actual cult. Crude objects resembling scarabs have been discovered dating from as early as the Neolithic period (7000-5000 BC)".....http://www.touregypt.net/featurestories/khephir.htm

"In Sufi tradition, Khidr has come to be known as one of the afrād, those "who receive illumination direct from God without human mediation...... the symbolism of Khidr has traveled far and beyond the geographical as well as ideological boundaries of its origin. The legend has truly lived up to its universal quality as it spreads across a variety of cultures and civilizations around the world. In the subcontinent folklore Khidr has appeared "as a substitute for the Hindu gods of the water and is particularly revered by sailors and fishermen....... It is in connection with Khidr being a patron-saint of sailors that his name is invoked down to this day by the sailors every time a boat is being launched in parts of the Middle East and Northern India.....Today Khidr can be found in the verses of Iqba1, in the poems of Rumi, and ‘Attar. He has immensely influenced the lives of many a mystic, ascetic and man of God throughout the history of Islam, such as 'Abd al-Karim al-Jili, Ibn ‘Arabi, Mansur al-Hallaj".....http://khidr.org/khidr.htm