"Bon, unlike the religious outgrowths of the Aryan culture, especially Hinduism, Buddhism, and Jainism in their quasi-popular forms, gives little heed to the pursuit of salvation through austerities. Bon philosophy speaks of Yeshen as being reflected in the interplay between heaven and earth."...(Chogyam Trungpa: The Heart of the Buddha"...1991..pg 222)....

"Jainism, traditionally known as Jaina dharma, is one of the oldest religions of the world, identified with the Śramaṇa tradition of ancient India....For long periods of time Jainism was the state religion of Indian kingdoms and widely adopted in the Indian subcontinent. The religion has been in decline since the 8th century CE due to the growth of Hinduism and oppression by Muslim invaders.....Jainism is a religious minority in India, with 4.2 million followers, and their manuscript libraries are the oldest in the country...In the 6th century BCE, Mahāvīra became one of the most influential teachers of Jainism. He built up a large group of disciples who learned and followed his teachings. The disciples referred to him as jina, which literally means conqueror. His later followers used a derivation of this title to refer to themselves: Jain, followers of the jina.".....http://en.wikipedia.org/wiki/Jainism 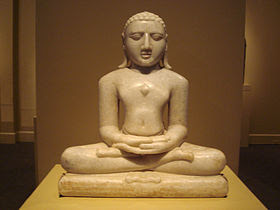 "Rishabha is usually depicted in lotus position or kayotsarga, a standing position. He is distinguished from other Tirthankara by his long locks of hair which falls on his shoulders......Rishabha (c. 7190 BCE) also known as Adinatha is an important figure in Jainism. He is referred to as the founder of Jainism.....He was the first of the twenty-four Tīrthaṅkara. According to Jain beliefs, Rishabha founded the Ikshvaku Solar Dynasty.".....http://en.wikipedia.org/wiki/Rishabha_(Jain_tirthankar)

"Jain vegetarian diet is practiced by the followers of Jain culture and philosophy. It is considered to be one of the most rigorous form of spiritually-motivated diet on the Indian subcontinent and beyond. The Jain cuisine is completely vegetarian and it also excludes onions and garlic, similar to the shojin-ryori cuisine of Japan. The strictest forms of Jain diet is practiced by the monastic ascetics, it may additionally exclude potatoes and other root vegetables. This food is called in Sanskrit a 'sattvic' food, which means that it is based on the qualities of goodness, lightness and happiness. On the other hand, onions and garlic are regarded to be 'tamasic', as they tend to have a quality of darkness, lethargy and indeed a putrid smell.".....http://en.wikipedia.org/wiki/Jain_vegetarianism

Chogyam Trungpa...."NYIDA: The vegetarian diet of Shambhala. Nyi stands for yellow and green foods, primarily vegetables and fruits, and da for white foods such as milk, yogurt, cheese and tofu......enjoy as your provision only yogurt, milk, white butter, cheese, fresh vegetables, raw fish and white rice. You should refrain from garlic, onions, fat and other meats."

"The Jain Emblem is a congregation of various symbols, each having a deeper meaning. In 1975 this symbol was adopted by all sects of Jainism while commemorating the 2500th anniversary of the nirvana of Lord Mahaveera......The inner part of the Emblem contains Swastika (explained below) and Jain Hand (explained below).....The meaning of the mantra at the bottom (PARSPAROGRAHO JIVANAM) is "Live and Let Live". All creatures should help one another.....The outline of the symbol is defined as the universe. It consists of three realms (Loks). The upper portion indicates URDHAVA LOK (heaven). It contains the heavenly abodes (Devloka) of all the celestial beings and abode of the Siddhas (Siddhashila). The middle portion indicates MADHYALOK (material world). It contains the Earth and other planets (Manushyalok). And the lower portion indicates ADHOLOK (hell). It contains the seven hells (Naraka). Jainism says that this universe was neither created by anyone, nor can it be destroyed by anyone. It may change its form, but otherwise, it has always been and will always be here."....http://www.ejainism.com/jainsymbols.html

"Chandragupta Maurya (340 BC – 298 BC) was the founder of the Mauryan Empire and the first emperor to unify India into one state. He ruled from 322 BC until his voluntary retirement and abdication in favour of his son Bindusara in 298 BC......His empire extended from Bengal and Assam in the east, to Afghanistan and Balochistan, eastern and south-east Iran in the west, to Kashmir in the north, and to the Deccan Plateau in the south...... He established a strong central administration patterned after that of the Persian Achaemenid dynasty....There was a growth in culture which derived its inspiration from the Achaemenids and the Hellenistic world.Chandragupta's reign was a time of great social and religious reform in India. The religious reform movements of Buddhism and Jainism became increasingly prominent......In foreign Greek and Latin accounts, Chandragupta is known as Sandrokottos and Androcottus.....Taditionally, Chandragupta, who was a Hindu, was influenced to accept Jainism by the sage Bhadrabahu; his grandson, Ashoka, Chandragupta Maurya is one of the most celebrated rulers in the history of India.".....http://en.wikipedia.org/wiki/Chandragupta_Maurya

"The Kalachakra refers to many different traditions, for example the Hindu; Saivite, Samkya, Vaishnava, the Vedas, Upanisads and Puranas traditions, but also Jainism. For example, the Kalachakra mandala includes deities which are equally accepted by Hindus, Jainas and Buddhists.".....http://en.wikipedia.org/wiki/Kalachakra

"Jainism is one of the ancient Indian religions founded around the sixth century B.C. It is also known as the Naked religion because it's founders, including Lord Rishabha used to practice without wearing any cloths. This practice was a part of their enduring hardship and for achieving spiritual realization. Jainists believe in cause and effect like Buddhism but they do not follow the middle doctrine of Buddha. Jainism practices two main paths. Engaging in ascetic practices to correct past negative actions or karma. Abiding by disciplines that do not create more causes to be reborn in this world. Jainist believe Lord Rishabha traveled to Mount Kailash to engage in his spiritual practices. He is believed to have gained liberation in front of Mount Kailash, where a rocky mountain is called, Throne of Buddha. In Hindi language, the rocky mountain is called Atri Pelda. "Atri" means eight and "Pelda" means sacred land. The rocky mountain has eight levels. The Jainists know Mount Kailash as Astapada."....http://www.kailashzone.org/pages/site_kailash/mtlake/hindu.php