Badakhshan and the Wakhan Corridor 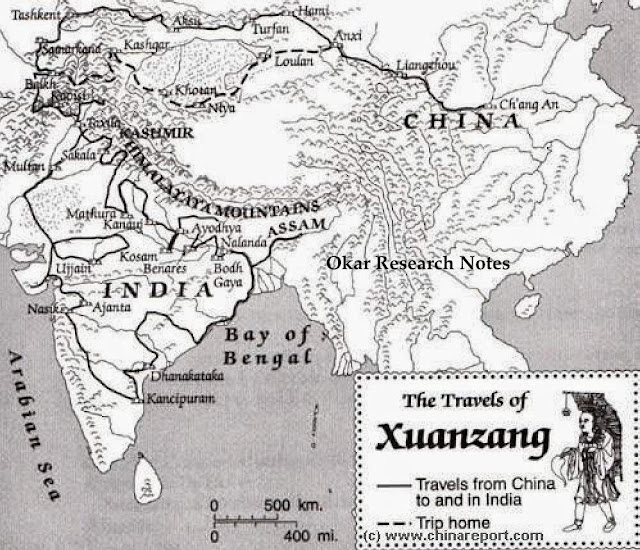 "In a unique ninth century manuscript found at Dunhuang, called Huichao wang wu tianzhuguo shuan (Account of Huichao's Journey to the Five Lands of India)...Around 726 AD a Buddhist monk from Silla (Korea?) named Huichao travelled in the region of Balkh.......After coming to India from China by sea, Huichao made his way through much of India, and then travelled over the Hindu Kush into Tokharistan before returning to China overland through the Tarim basin. In the time since Xuanzang's visit (629-645 AD), Arab armies had conquered all of the Persian Empire and had been making war on Tokharistan for a long time....In 725 AD the Arab garrison had been moved into Balkh proper, as Arab sources tell.........Islam and Tibet: Interactions Along the Musk Routes (Ashgate Publishing: 2011).....edited by Anna Ayşe Akasoy, Charles S. F. Burnett, Ronit. Yoeli-Tlalim
Chapter 3....The Bactrian Background of the Barmakids by Kevin van Bladel


"From the land of Bamiyan I travelled northwards 20 days, and I arrived in Tokharistan (Tuhuoluo-guo). The home city of the king is called Balkh. At this time the troops of the Arabs are there and they occupy it. Its king was forced to flee one month's journey to the east and lives in Badakhshan. Now Balkh belongs to the Arabs' domain.....the language is different from that of the other lands; though somewhat similar to that of Kapisa....From the King to the lowly people, they all wear fur and cotton....there are plenty of horses, camels, cotton and grapes....the king, the nobles and the people revere the Three Jewels....the men cut their beards and hair....the land has many mountains...."....From a unique ninth century manuscript found at Dunhuang, called Huichao wang wu tianzhuguo shuan (Account of Huichao's Journey to the Five Lands of India).....In his view the King of Balkh was still alive and in exile in Badakhshan (Pashto/Persian: بدخشان‎). 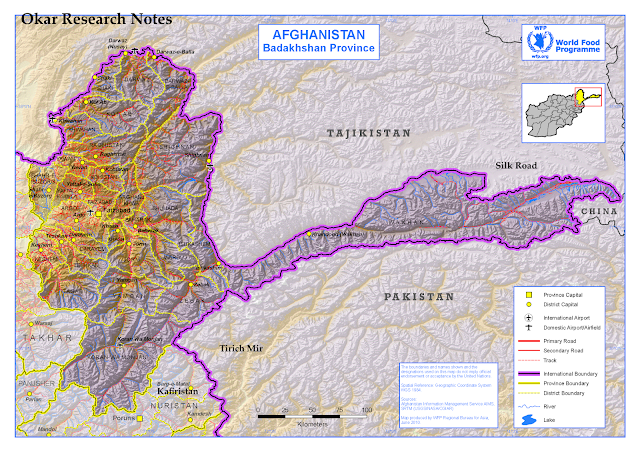 Badakhshan is a historic region comprising parts of what is now northeastern Afghanistan and southeastern Tajikistan. The name is retained in Badakhshan Province which is one of the thirty-four provinces of Afghanistan, in the far northeast of Afghanistan, and contains the Wakhan Corridor...The people of this province have a rich cultural heritage and they have preserved unique ancient forms of music, poetry and dance....Badakhshan was an important trading center during antiquity. Lapis lazuli was traded with the Egyptian's exclusively from there as early as the 5th millennium BC. Badakhshan was an important region when the Silk Road passed through. Its significance is its geo-economic role in trades of silk and ancient commodities transactions between the East and West. According to Marco Polo, Badashan/ Badakshan was a province where Balas rubies could be found under the mountain "Syghinan" (Shighnan).....http://en.wikipedia.org/wiki/Badakhshan

"The valleys are narrow, but fertile and populous. The mountains are rugged and difficult; but there is much of the world-famous beauty of scenery, and of the almost phenomenal agricultural wealth of the valleys of Bukhara and Ferghana to be found in the recesses of Badakhshan.....Mount Imeon was famous for its lapis lazuli deposits in western Badakhshan, indicated on Shirakatsi’s map. The mines at Sar-e-Sang have been producing lapis lazuli for millennia now, supplying the ancient civilizations of Egypt, Mesopotamia, India, and Rome, and still yielding the world’s finest lapis. The Venetian adventurer Marco Polo visited the mines in 1271 during his famous journey to China, following the Silk Road to cross the mountains by way of Wakhan."....

"Shighnan (also Shignan, Shugnan, Shughnan, Khughnan in the local language) (Persian: شغنان‎) is an historic region whose name today may also refer to a town and a district in Badakhshan Province in the mountainous northeast of Afghanistan and also a district in Gorno-Badakhshan Autonomous Province in Tajikistan. The administrative center of the Shighnan District of Afghanistan is called Qaleh Barpanjeh (قلعه برپنجه). The administrative center of the Shughnon District of Tajikistan is called Khorogh....In ancient times the area was known for its ruby mines, which are mentioned in the writings of Marco Polo: It is in this province that those fine and valuable gems the Balas Rubies are found. They are got in certain rocks among the mountains, and in the search for them the people dig great caves underground, just as is done by miners for silver. There is but one special mountain that produces them, and it is called Syghinan."....https://en.wikipedia.org/wiki/Shighnan

Wakhan Corridor (alternatively Vakhan Corridor) is commonly used as a synonym for Wakhan, an area of far north-eastern Afghanistan which forms a land link or "corridor" between Afghanistan and China. The Corridor is a long and slender panhandle or salient, roughly 140 miles (220 km) long and between 10 and 40 miles (16 and 64 km) wide. Part of Badakhshan Province, Wakhan Corridor separates Gorno-Badakhshan Autonomous Province of Tajikistan in the north from Khyber Pakhtunkhwa and Gilgit Baltistan, Pakistan in the south through Pakistan Administered Kashmir.... the Corridor was historically used as a trading route between Badakhshan and Yarkand. It appears that Marco Polo came this way.The Portuguese Jesuit priest Bento de Goes crossed from the Wakhan to China between 1602 and 1606. In May 1906 Sir Aurel Stein explored the Wakhan, and reported that at that time 100 pony loads of goods crossed annually to China....An important trade route passes by Badakhshan, crossing the high mountain ... They bring to Badakhshan the musk of the regions of Tibet, adjoining Wakhan......

"Two of the five watersheds in the Amu Darya River Basin, the Panj and Kokcha watersheds, are located in Badakhshan......The Kokcha River is a river of northeastern Afghanistan. A tributary of the Amu Darya river, it flows through Badakhshan Province in the Hindu Kush range of Afghan Turkestan. The city of Feyzabad lies along the Kokcha. Near the village of Artin Jelow there is a bridge over the river.....The Kokcha River valley is known for its lapis lazuli mining in Badakshan province. Found in limestone these deposits in the mines of Sar-e-Sang were being worked as early as the 3rd millennium BC and the Kokcha River valley is considered one of the world's leading areas of mining this reserve. The valley was the source of lapis for the ancient Egyptian and Mesopotamian civilizations, as well as the later Greek and Roman. During the height of the Indus valley civilization about 2000 B.C., the Harappan colony now known as Shortugai was established near the lapis mines....Shortugai (Shortughai) was an Indus civilization trading colony established around 2000 BC on the Oxus river near the lapis mines in northern Afghanistan"...http://en.wikipedia.org/wiki/Kokcha_River

Journal of the North-China Branch of the Royal Asiatic Society, Volume 10

Notices of the Mediæval Geography and History of Central and Western Asia By E. Bretschneider