"Tibetan and Navajo life is a process of constant re-balancing....both groups see the process of living as a spiritual journey.....both cultures lack our word "religion," which literally means to bind back, to link back. In the Tibetan and Navajo cultures, spirituality is a way of life, and there is no sense of linking back to anything. This sense of full and present participation in a spiritual way of living contrasts sharply with Western culture where religion is often seen as a counter-force to everyday life, where being spiritual means being different and having to swim against the current.".....Peter Gold: "Navajo and Tibetan Sacred Wisdom: The Circle of the Spirit." 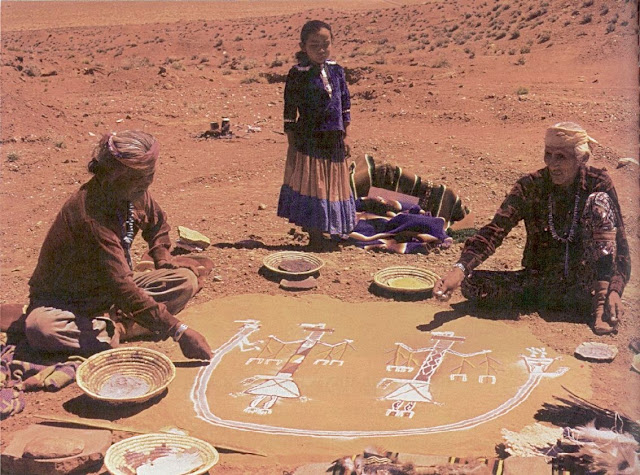 Religion (from O.Fr. religion "religious community," from L. religionem (nom. religio) "respect for what is sacred, reverence for the gods," "obligation, the bond between man and the gods") is derived from the Latin religiō, the ultimate origins of which are obscure. One possibility is derivation from a reduplicated *le-ligare, an interpretation traced to Cicero connecting lego "read", i.e. re (again) + lego in the sense of "choose", "go over again" or "consider carefully". Modern scholars such as Tom Harpur and Joseph Campbell favor the derivation from ligare "bind, connect", probably from a prefixed re-ligare, i.e. re (again) + ligare or "to reconnect," ......http://en.wikipedia.org/wiki/Religion

"Both the Tibetans and the Navajos perceive life as a journey toward the unity of matter and spirit, real and ideal. The Tibetans use two words to express this ideal state of being: "tashi," a harmonious relationship with the universe, and "sangye se," Buddha nature or enlightenment. The Navajos, on the other hand, use the word "hozho" or "beauty" to describe an "empowered state of the deities.....Both have developed vast traditions of knowledge and sacred rites of transformation, called 'haatal,' or 'chantway,' by the Navajo and 'gyud' or 'tantra' by the Tibetans...Both people believe that humans contain an inborn divinity, though this aspect may be obstructed by deluded thinking and unbalanced living."...PARABOLA, Volume XXI, Number 4, November 1996

"....the ancient concept one finds throughout central Asia of 'joining heaven and earth,"

"....because the Navajo and Tibetan spiritual practices both contain strong shamanistic elements (the Buddhism of Tibet representing the eighth-century marriage of the older indigenous shamanistic Bon-po with Indian Buddhism), they would, of course, resemble one another, as they would many other shamanistic cultures. Mircea Eliade's exhaustive work, Shamanism: Archaic Techniques of Ecstasy, indicates that shamanism worldwide is startlingly homogeneous. And rather than pointing to some historical contact and exchange of ideas between groups, this homogeneity more strongly suggests an agreement of human experience; it is a widely experienced perception of reality--perhaps this simply is what is.".....Sharon M. Van Sluijs,.....http://www.ancientwaysproject.org/images/Two_Reviews-NTSW.pdf 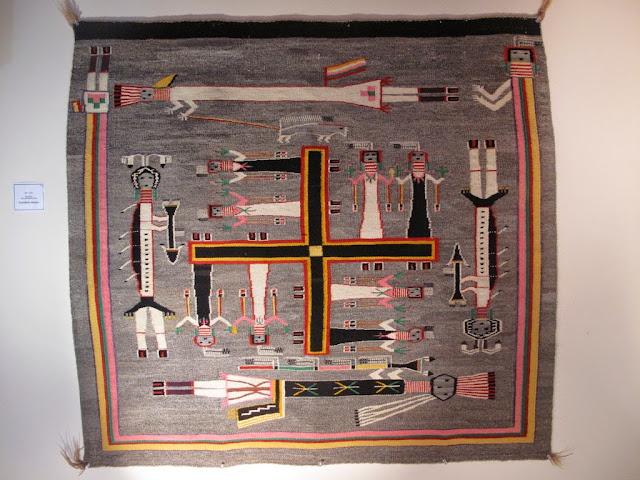 "Basic goodness is a term used both to discuss the experience of reality and also basic human virtue.....In the 1980 Seminary Trungpa associates this term with both absolute bodhicitta and specifically the Tibetan term kun.gzhi.ngang.lugs.kyi.dge.ba.....unborn, nondwelling, and beyond conceptual reference points....also referring to personal wholesomeness and dedication to others.".....http://en.wikipedia.org/wiki/Basic_goodness 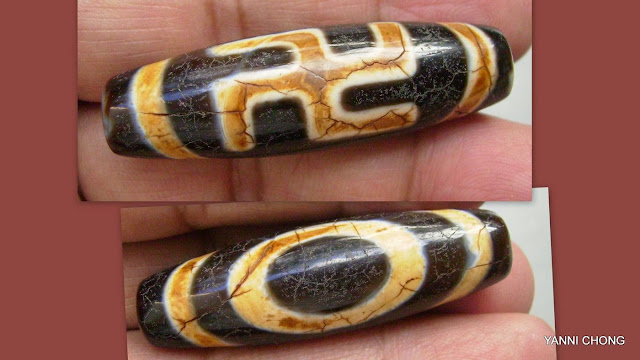 PURE AGATE TIBETAN SWASTIKA DZI BEAD.....The Swastika symbol has been used for thousands of years already in almost all human civilizations as a sign for good luck, protection, as a materialization of life and the changing seasons of the year. It is believed that this Dzi bead will bring happiness, wealth and prosperity to its owner.

".....the Shambhala Training notion of natural hierarchy is akin to an arranged mandala where people are connected, interdependent, and communicate in natural ways. The Chinese triune notion of Heaven, Earth and Man is considered the prototypical pattern of natural hierarchy....http://en.wikipedia.org/wiki/Shambhala_Training

"NATURAL HIERARCHY: "Living in accordance with natural hierarchy is not a matter of following a series of rigid rules or structuring your days with lifeless commandments or codes of conduct. The world has order and power and richness that can teach you how to conduct your life artfully, with kindness to others and care for yourself." "The discovery of Natural Hierarchy has to be a personal experience - magic is something you must experience for yourself." "You will be inspired to serve your world, to surrender yourself completely." When we refer to hierarchy, we refer to the structure and order of the universe-a sense of heritage that the warrior must appreciate. But appreciating isn't enough. There is a need for discipline, and that discipline comes from realizing that such a world as this was created for you, that people expended energy to bring you up, that in your weak moments you were helped, and that, when you were ready for inspiration, you were inspired. So, the discipline of genuinely working for others comes from appreciating hierarchy." "The warrior's journey of discovering natural hierarchy of reality and his place in the world is both exalted and very simple. It is simple, because it is so immediate and touching. It is touching your origin - your place in this world, the place you came from and the place you belong.".....http://www.glossary.shambhala.org/#NATURALHIERARCHY 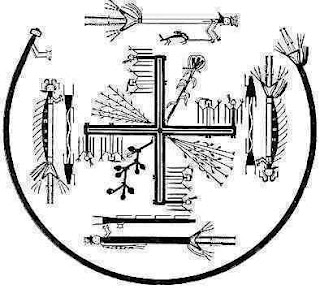 "After the sandpainting is completed and used during the ceremony, it is destroyed....the sandpainting "has a life span…its purpose in healing...[to remove] the illness" (the imbalance of hózhó), it is removed from the ritual space and disposed of quite quickly and must be done so in a proper manner. The map is not needed anymore. Just as a sandpainting can restore hózhó, so too can it cause an imbalance (hóchxó) if left manifested indefinitely. The Navajo need the Holy Beings to take the illness away, but they do not want them around all the time which can result in an imbalance. To the Navajo, taking a picture of a completed sandpainting then framing it (as art) "would be like if I locked you up in a closet for thirty days and didn't let you come out. You would be weakened from the experience and would need to be renewed and strengthened."......http://www.colorado.edu/religiousstudies/TheStrip/features/Navajo/living.htm

"Kalachakra sand mandala....The painting/construction of a mandala is a ritual act of devotion that not only aligns the Buddhist artist(s) with their belief, but manifests their belief in a tangible and physical embodiment of it. The veil that separates the believer from the divine is lifted, and then, as quickly as it is breathed into existence, is ritually destroyed (in the case of sand mandalas)."....."The Temporary Artist: An essay On Kalachakra Sand Mandalas

In the Tibetan Bon tradition, the Yungdrung is a symbol of that which is beyond impermanence and indestructible..... the Bön, one of the oldest traditions in Central Asia, has used Swastika as its most important religious symbol since an everlasting time. Today this tradition which existed in Tibet before the introduction of Buddhism is still very much present and continuing its teachings (Bön)......The yungdrung is the principal symbol of the Bon Religion, also known as the Yungdrung Bon, Ever-lasting Truth.".....http://www.himalayanart.org/search/set.cfm?setID=1232