"Garab Dorje lived in about the 7th Century in Western Pakistan/Eastern Afghanistan...his verses were orally transmitted and written down in 'Indic' languages of the region. They were translated into the Tibetan language by 8th century masters such as Vairotsana and Vimalamitra. The original Indic language texts no longer exist."....Dowman (2010 pg 13) 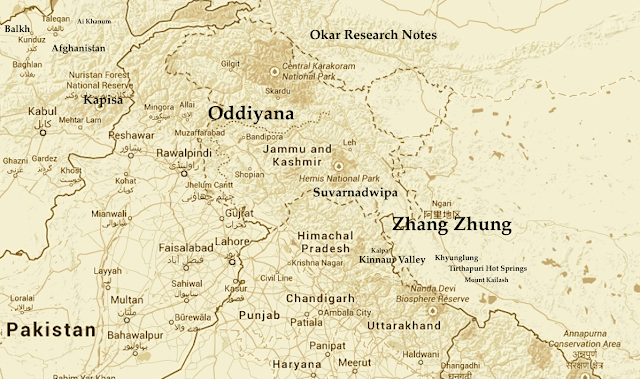 "In the north-western part of the land of Oddiyana, Uddiyana (Eastern Afghanistan/Pakistan)....Buddhist texts speak of Oddiyana as a beautifully green and fertile kingdom, inhabited by gentle people often clothed in white, who had great respect for wisdom and learning. It was surrounded by high, rugged mountains, and in the broad valleys were towering white stupas and golden temple roofs."...... John Reynolds suggests that “perhaps Uddiyana is actually a name of a much wider geographical area than the Swat Valley alone, one embracing parts of Pakistan, Afghanistan, and even Western Tibet (Zhang Zhung).".....Reynolds, John M., The Golden Letters, Snow Lion, Ithaca, New York, 1996

"Just as in the case of the Nyingmapas among the Tibetan Buddhists, the Bonpo tradition possesses as its highest teaching the system of contemplation known as Dzogchen, "the Great Perfection," (rdzogs pa chen po). These teachings reveal in one's immediate experience the Primordial State (ye gzhi) of the individual, that is to say, the individual's inherent Buddha-nature or Bodhichitta, which is beyond all time and conditioning and conceptual limitations. This Natural State (gnas-lugs) is spoken of in terms of its intrinsic primordial purity (ka-dag) and its spontaneous perfection in manifestation (lhun-grub). Both the Buddhist Nyingmapas and the Bonpos assert that their respective Dzogchen traditions were brought to Central Tibet in the eighth century, the Nyingmapa transmission from the Mahasiddha Shrisimha in living in Northern India and the Bonpo transmission from a line of Mahasiddhas dwelling around Mount Kailas and the lake country of Zhang-zhung to the west and north of Tibet. Thus there appear to exist two different historically authentic lineages for the transmission of these teachings....the Nyingmapa transmission of the Dzogchen precepts was brought to Central Tibet principally due to the activities of three teachers: the great Tantric master Padmasambhava from the country of Uddiyana, the Mahasiddha and Mahapandita Vimalamitra from India, and the native-born Tibetan translator Vairochana of Pagor. According to tradition, the latter came originally from a Bonpo family.,,,On the Tibetan translator Vairochana as a Bonpo, see Samten Karmay, The Great Perfection, Brill, Leiden 1988, pp. 17-37, 216-223."...http://bon-encyclopedia.wikispaces.com/origin+of+dzogchen

"According to Nyingmapa tradition, the Dzogchen precepts were first expounded in our human world by the Nirmanakaya Garab Dorje (dGa' rab rdo rje, Skt. Prahevajra) in the country of Uddiyana and were later propagated in India by his disciple Manjushrimitra. The latter transmitted them to his diciple Shri Simha who, in turn, conferred them upon Padmasambhava, Vimalamitra, and Vairochana the translator. These three brought the precepts to Tibet in the middle part of the eighth century. Thus, this teaching was originally a secret oral instruction restricted to a small group of Tantric initiates. The tradition claims that it originally came from the mysterious country of Uddiyana to the northwest of India. Therefore, it appears most likely that it is to the Indo-Tibetan borderlands of the northwest that we should look for the origins of Dzogchen."...http://bon-encyclopedia.wikispaces.com/origin+of+dzogchen

"....it is to the Indo-Tibetan borderlands of the northwest that we should look for the origins of Dzogchen. This seems equally true for the historical origins of Bonpo Dzogchen, for this second authentic lineage of the Dzogchen teachings also did not originate in India proper, but was brought to Central Tibet in the ninth and tenth centuries from Zhang-zhung in Northern Tibet by the disciples decending from Gyerpung Nangzher Lodpo. [8] Until the eighth century, the country of Zhang-zhung had been an independent kingdom with its own language and culture. It lay in what is now Western and Northern Tibet and the center of the country was dominated by the majestic presence of the sacred mountain of Gangchen Tise or Mount Kailas.....http://bon-encyclopedia.wikispaces.com/origin+of+dzogchen

"..... it now appears likely that before Indian Buddhism came to Central Tibet in the seventh and eighth centuries, Zhang-zhung had extensive contacts with the Buddhist cultures that flourished around it in Central Asia and in the Indo-Tibetan borderlands. Just to the west of Zhang-zhung there once existed the vast Kushana empire which was Buddhist in its religious culture. It was an area in which Indian Buddhism interacted with various strands of Iranian religion-- Zoroastrian, Zurvanist, Mithraist, Manichean, as well as Indian Shaivism and Nestorian Christianity. This was also true of the oasis cities of the Silk Route to the northeast of Zhang-zhung such as Kashgar. Some scholars have seen this region beyond India as playing a key role in the development of certain aspects of Mahayana Buddhism, and later also in the development of Tantric form of Buddhism known as Vajrayana. For example, the revelation of the Guhyasamaja Tantra is said to have occurred to king Indrabhuti in Uddiyana and was later brought to India proper by the Mahasiddhas Saraha and Nagarjuna. Moreover, the Kalachakra Tantra is said to have been brought from Shambhala in Central Asia to Nalanda in India in the tenth century by the Mahasiddha Tsilupa. The Bonpos came to identify this Shambhala with Olmo Lungring itself. All this suggests that certain trends within Yungdrung Bon, rather than being later plagiarisms and imitations of Indian Buddhism concocted in the tenth century, actually do go back to a kind of syncretistic Indo-Iranian Buddhism that once flourished in the independent kingdom of Zhang-zhung before it was forcibly incorporated into the expanding Tibetan empire in the eighth century. This "Buddhism", known as gyer in the Zhang-zhung language and as bon in the Tibetan, was not particularly monastic, but more Tantric in nature and its diffusion was stimulated by the presence of various Mahasiddhas in the region such as the illustrious Tapihritsa and his predecessors dwelling in caves about Mount Kailas and about the lakes to the east in Northern Tibet. Even into this century, Kailas remained an important site of pilgrimage drawing Hindu sadhus and yogis from India......http://bon-encyclopedia.wikispaces.com/origin+of+dzogchen

Such a mixed "Buddhist" culture, being both Tantric and shamanic, was suppressed in the eighth century when, at the instigation of the Tibetan king Trisong Detsan, the last king of independent Zhang-zhung, Ligmigya, was ambushed and assassinated when he left his castle of Khyung-dzong on the Dang-ra lake in Northern Tibet. Zhang-zhung and its people were absorbed into the Tibetan empire and disappeared as an independent entity. The Zhang-zhung-pas were pressed into the service of the Tibetan army as it expanded westward into Ladakh and Baltistan. Today the Zhang-zhung-pas survive as the nomad people of Western and Northern Tibet, often possessing the same ancient clan names. But having been converted to the Drigung Kagyudpa school of Buddhism, they have forgotten their ancient heritage. The old caves, once the dwelling places of the Bonpo Mahasiddhas, are now thought to be the domain of ghosts, places to be shunned and avoided. Yet ancient ruins, believed to antedate the Tibetan empire, are still to be seen at Khyung-lung (Khyung-lung dngul-mkhar) west of Kailas and on the shores of the Dang-ra lake to the east in Northern Tibet. "....http://bon-encyclopedia.wikispaces.com/origin+of+dzogchen

Vairotsana...Vairotsana of 'Pagor' (Wylie: spa gor) (Tib.: Be-ro-tsa-na) was a Tibetan translator living during the reign of King Trisong Detsen (who ruled from 755 until 797). Vairotsana, one of the 25 main disciples of Padmasambhava, was recognized by the latter as a reincarnation of an Indian pandita. He was among the first seven monks ordained by Shantarakshita, and was sent to India to study with Shri Singha who taught him in complete secrecy. Shri Singha in turn entrusted Vairotsana with the task of propagating the Mind section and the Space section of Dzogchen in Tibet. He is one of the three main masters to bring the Dzogchen teachings to Tibet, the two others being Padmasambhava and Vimalamitra. He was also a significant lineage holder of Trul Khor.......Born in Pagor, Vairotsana was sent to India by Trisong Detsen to learn the Dharma with Indian pandits. Vairotsana also travelled widely in China, Khotan, Nepal, Shangshung, amongst other places.