"Eflatun Pinar, Budak, sacred Hittite or Arzawan spring, near Lake Beysehir.....Eflatun Pınar (Turkish: Eflatunpınar, "lilac-colored spring") is the name given to a spring which rises up from the ground, creating an oasis and fountain. The spring lies 80 miles west of Konya, and drains into Lake Beyşehir in Anatolian peninsula at ancient Pisidia region. In ancient times a small temple was built here to honor one of the ancient Hittite gods...Eflatun Pinar was a holy spring in the time of the Hittite empire around the 13th century BC." ...http://en.wikipedia.org/wiki/Eflatun_Pınar 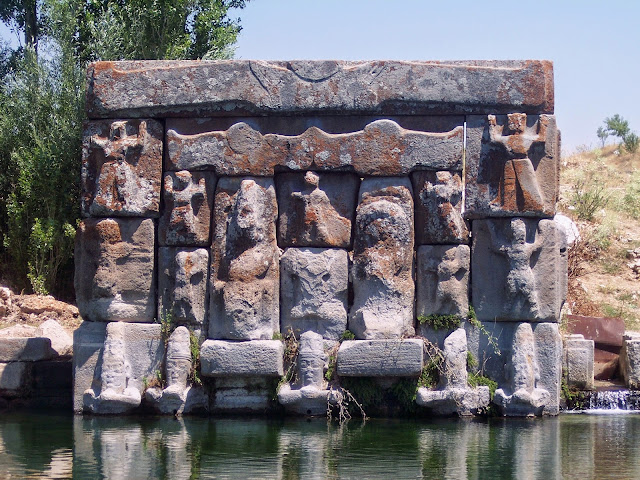 This monument may be dated to the 2nd half of 13th century BCE.

"The sun goddess of Arinna is the most important one of three important solar deities of the Hittite pantheon, besides UTU nepisas - "the sun of the sky" and UTU taknas - "the sun of the earth".....She was considered to be the chief deity in some source, in place of her husband. Her consort was the weather god, Teshub; they and their children were all derived from the former Hattic pantheon....The goddess was also perceived to be a paramount chthonic or earth goddess. She becomes largely syncretised with the Hurrian goddess Hebat....In the late 14th century BC, King Mursili II was particularly devoted to the sun goddess of Arinna.....http://en.wikipedia.org/wiki/Arinna

Eflatunpınar Monument.... located about 22 km north of the town of Beyşehir. The monument is formed as a rectangular shaped pond fed with the waters from a nearby spring. The most prominent part is the high wall of reliefs that stand on the north edge of the roughly 34 by 30 meter rectangular pond. It is built with large stone blocks. In the center are the Storm God and the Sun Goddess with winged sun-disks above each. Around them are ten spirits or hybrid creatures supporting the the two winged sun disks above the gods and an enourmous winged sun disk above them. The base has five mountain gods that are partially visible. The central three of the mountain gods could be interpreted as mountain-spring gods with multiple spring holes on them. The stage altogether may be interpreted as a cosmic scene with heavens at the top and earth at the bottom, with gods and spirits holding the heavens in between."...http://en.wikipedia.org/wiki/Eflatun_Pınar

"The understanding of Hittite mythology depends on readings of surviving stone carvings, deciphering of the iconology represented in seal stones, interpreting ground plans of temples: additionally, there are a few images of deities, for the Hittites often worshipped their gods through Huwasi stones, which represented deities and were treated as sacred objects."....http://en.wikipedia.org/wiki/Hittite_mythology

"In Hittite mythology, a huwasi stone is sacred to a deity and is usually situated in a temple. Larger huwasi stones were placed in an open area surrounded by trees and other plants. The stones were treated as gods; they were given food and water and were anointed and washed. At any cult center, the deities who couldn't be given a temple were worshipped at huwasi stones. The term huwasi was used to describe the housing of the sacred stela, the huwasi stone".....Bryce, Trevor. Life and Society in the Hittite World

"....the religion of the Hittites retains noticeable Indo-European elements, for example Tarhunt the god of thunder; his conflict with the serpent Illuyanka resembles the conflict between Indra and the cosmic serpent Vritra in Indo-Aryan mythology. His consort is the Hattic sun-goddess. This divine couple were presumably worshipped in the twin cellas of the largest temple at Hattusa.".....Gary Beckman, "The Religion of the Hittites"

"...The Hittites referred to their own "thousand gods", of whom a staggering number appear in inscriptions but remain nothing more than names today. This multiplicity has been ascribed to a Hittite resistance to syncretization: "many Hittite towns maintained individual storm-gods, declining to identify the local deities as manifestations of a single national figure"....

"The gods of the underworld were called taknas siunes, 'the gods of the earth', as opposed to the siunes kattares, 'the upper gods' (of heaven)." ....Dictionary of Ancient Near Eastern Mythology.....By Dr Gwendolyn Leick

"Plth.wih. is reconstructed as Plenty, a goddess of wide flat lands and the rivers that meander across them. Forms include Hittite Lelwanni, a goddess of the underworld, "the pourer", and Sanskrit Prthivi.......The various Indo-European daughter-cultures continued elements of PIE religion, Anatolian, Indo-Iranian, Indo-Aryan."....http://en.wikipedia.org/wiki/Proto-Indo-European_religion 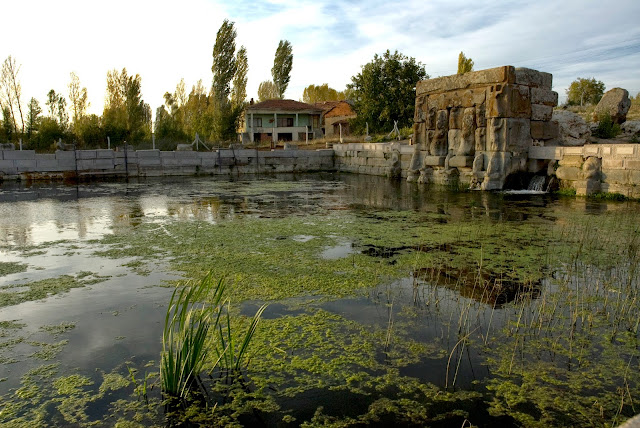