Plato (Πλάτων, Plátōn, c. 428-348 BCE) was a philosopher in Classical Greece. He was also a mathematician, student of Socrates, writer of philosophical dialogues, and founder of the Academy in Athens, the first institution of higher learning in the Western world.

The Allegory of the Cave— presented by the Greek philosopher Plato in his work The Republic.....Plato describes a group of people who have lived chained to the wall of a cave all of their lives, facing a blank wall. The people watch shadows projected on the wall by things passing in front of a fire behind them, and begin to ascribe forms to these shadows....a scenario in which what people take to be real would in fact be an illusion..... According to Plato's Socrates, the shadows are as close as the prisoners get to viewing reality....the philosopher is like a prisoner who is freed from the cave and comes to understand that the shadows on the wall do not make up reality at all..... the Allegory of the Cave is an attempt to attempt to enlighten the "prisoners.".....http://en.wikipedia.org/wiki/The_Allegory_of_the_Cave

Metaphor of the Sun....The Allegory of the Cave is presented after the Metaphor of the Sun....Plato uses the sun as a metaphor for the source of "illumination", which he held to be The Form of the Good.... The metaphor is about the nature of ultimate reality and how knowledge is acquired concerning it.....Plato says the sun and the Good are both sources of "generation"...... "You'll be willing to say, I think, that the sun not only provides visible things with the power to be seen but also with coming to be....not only do the objects of knowledge owe their being known to the good, but their being is also due to it, although the good is not being, but superior to it in rank and power". Republic 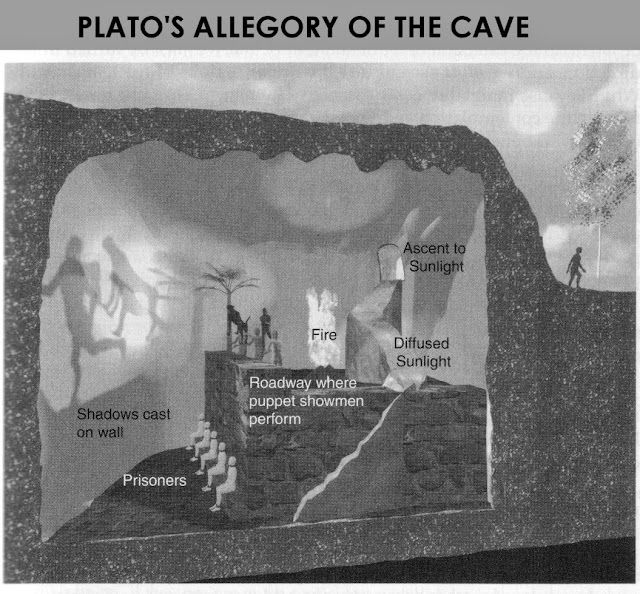 The 'Form of the Good'.....Plato thinks "very existence and essence is derived from 'The Good'....."the idea of the good" (ἡ τοῦ ἀγαθοῦ ἰδέα)...... The Sun is described in a simile as the child (ἔκγονος ekgonos) of the Form of the Good......There is an ancient anecdotal tradition that Plato gave a public lecture entitled "On the Good" which so confused the audience that most walked out.....Aristoxenus, Harmonics 30–31; see A. S. Riginos, Platonica (1976)

Plato's Phaedo.....'a philosopher recognizes that before philosophy, his soul was "a veritable prisoner fast bound within his body... and that instead of investigating reality by itself and in itself it is compelled to peer through the bars of its prison."

Philosopher Kings....the rulers of Plato's Utopian Kallipolis. If his ideal city-state is to ever come into being, "philosophers must become kings......Callipolis is the Latinized form of Kallipolis, which is Greek for "beautiful city", from κάλλος kallos (beauty) and πόλις polis (city)......Kallipolis" is also the word Socrates uses for his utopia in Plato's dialogue The Republic....Plato defined a philosopher as 'wisdom-lover'.....the only person who has access to the archetypal entities that exist behind all representations of the form.....'A true pilot must of necessity pay attention to the seasons, the heavens, the stars, the winds, and everything proper to the craft if he is really to rule a ship'....

"The Republic says that people who take the sun-lit world of the senses to be good and real are living pitifully in a den of evil and ignorance..... few climb out of the den, or cave of ignorance, and those who do, not only have a terrible struggle to attain the heights, but when they go back down for a visit or to help other people up, they find themselves objects of scorn and ridicule.".....http://en.wikipedia.org/wiki/Plato

"On the one hand it sometimes seems that Plato can be read almost as a Western alternative to the Buddha: for he invokes a spiritual path by which we can ascend to the highest wisdom beyond worldly attachments. The techniques by which the Socrates of Plato’s dialogues leads his interlocutors out of their limited viewpoints towards wisdom, from a standpoint of sagacious clarity, is often reminiscent of the Buddha’s responses to his various questioners in the Pali suttas. The parallels are so tempting that one can even begin to talk, like Edward Conze, of the “Perennial Philosophy” of which the Buddha and Plato are leading exponents, a philosophy based on engagement with the transcendental in contrast to the desiccated “Sciential Philosophy” of the modern West..... On the other hand, he can be seen as a wayward disciple who betrayed the insights of his teacher Socrates. He can be the first great dualist, the thinker who started off the endless, and fruitless, reactive process in Western philosophy between eternalistic rationalism and nihilistic empiricism.".....http://www.westernbuddhistreview.com/vol3/plato.html

"Socrates would be the most similar to the Buddha in both his approach and his worldview. Socrates’ views, as expressed by him or on his behalf, those that are available to us, would not obviously contradict the Buddha’s as recorded in the sutras, and neither would his practice-based approach to philosophy as the study of oneself.".....http://askaphilosopher.wordpress.com/2012/05/23/comparing-the-buddha-to-socrates-plato-and-descartes/

"Basic goodness is a term coined by Tibetan spiritual teacher Chögyam Trungpa and is a core concept in his terma. It is used both to discuss the experience of reality and also basic human virtue.....In his 1980 Seminary he associates this term with both absolute bodhicitta and specifically the Tibetan term kun.gzhi.ngang.lugs.kyi.dge.ba which comes from the Kadam tradition and refers to the natural virtues of the kunshi or alaya. Specifically he described three virtues: unborn meaning non-manufactured; nondwelling meaning that it cannot be pinned down, and free from pigeonholing meaning that it is beyond conceptual reference points. In his 1981 Seminary he described it as also referring to personal wholesomeness and dedication to others."....http://en.wikipedia.org/wiki/Basic_goodness

Great Eastern Sun...."Certain Shambhala practices derive from specific terma texts of Trungpa Rinpoche's such as, Golden Sun of the Great East, and the Scorpion Seal of the Golden Sun, in long and short versions.....GREAT EASTERN SUN: (Tibetan: "Sharchen Nyima"), "The vision of the Great Eastern Sun (is that) no human being is a lost cause." (pg 59) "The Great Eastern Sun illuminates the way of discipline for the warrior." (pg 63) "The great Eastern Sun provides the means to take advantage of your life in the fullest way." (pg 64) "...is the expression of true human goodness, based not on arrogance and aggression, but on gentleness and openness. it is the way of the warrior." (pg 108)"The Great Eastern Sun vision...is based on appreciating ourselves...and our world, so it is a very gentle approach." (pg 57) "The way of the Great Eastern Sun is based on seeing that there is a natural source of radiance and brilliance in this world - which is the innate wakefulness of human beings." (pg 97-98)...."Sacred World is connected with East, because there are always possibilities of vision in the world. East represents the dawn of wakefulness." "...the sacred world is lighted by the sun, which is the principle of never-ending brilliance and radiance...[and] with seeing self-existing possibilities of virtue and richness in the world." (pg 127) (see Sacred World.) If you in the sky, the sun is there. By looking at it, you don't produce a new sun. ... When you discover the sun in the sky, you begin to communicate with it. Your eyes begin to relate with the light of the sun."....http://www.glossary.shambhala.org/#GES

BASIC GOODNESS: "If we are willing to take an unbiased look, we will find that, in spite of all our problems and confusion, all our emotional and psychological ups and downs, there is something basically good about our existence as human beings. We have moments of basic non-aggression and freshness...it is worthwhile to take advantage of these moments...we have an actual connection to reality that can wake us up and make us feel basically, fundamentally good." (see Warrior) "The realization that we can directly experience and work with reality." (pg 29-33) "In the ordinary sense, we think of space as something vacant or dead. But in this case, space is a vast world that has capabilities of absorbing, acknowledging, and accommodating...if you look into it, you can't find anything. If you try to put your finger on it, you find that you don't even have finger to put! That is the primordial nature of basic goodness, and it is that nature which allows a human being to become a warrior, to become the warrior of all warriors." (pg 155) (see Warrior, Sacred Space)"...when you relax more and appreciate your body and mind, you begin to contact the fundamental notion of basic goodness in yourself. So it is extremely important to be willing to open yourself to yourself. Developing tenderness towards yourself allows you to see both your problems and your potential accurately. You don't feel that you have to ignore your problems or exaggerate your potential. That kind of gentleness towards yourself and appreciation of yourself is very necessary. It provides the ground for helping yourself and others." (pg 35-36) "The way to begin is with ourselves. From being open and honest with ourselves, we can also learn to be open with others. So we can work with the rest of the world, on the basis of the goodness we discover in ourselves. Therefore, meditation practice is regarded as a good and and in fact excellent way to overcome warfare in the world: our own warfare as well as greater warfare." (pg 41)...http://www.glossary.shambhala.org/#BASICGOODNESS

Kuntuzangpo; Wyl. kun tu bzang po) — In the Dzogchen teachings, our true nature, that state of the Ground, is given the name the 'Primordial Buddha'. Sogyal Rinpoche writes, "[Kuntuzangpo] represents the absolute, naked, sky-like primordial purity of the nature of our mind"......He is depicted as a buddha, sky-blue in colour, sitting in the vast expanse of space, and encircled by an aura of rainbow light. He is completely naked, meaning unstained by any trace of concept. His name, Kuntuzangpo in Tibetan, Samantabhadra in Sanskrit, means ‘always good', ‘always well’ or ‘unchanging goodness.’ What this signifies is that unchanging goodness, or fundamental goodness, is our ultimate nature.....http://en.wikipedia.org/wiki/Bon

Kuntu Zangpo: the All-good, a deity that represents primal purity and goodness. .....http://www.himalayanart.org/search/set.cfm?setID=1387

Kunzang Akor: the All-good 'A' Circle is a meditational form of Shenlha Okar. He is generally recognized by the Tibetan letter 'A' placed on the chest at the level of the heart. The two hands generally rest in the lap and hold the stems of two flower blossoms supporting a yungdrung (svastika) on the right and a vase on the left. There are numerous traditions of ritual cycles and meditation practices for Kunzang Akor.....http://www.himalayanart.org/search/set.cfm?setID=1387