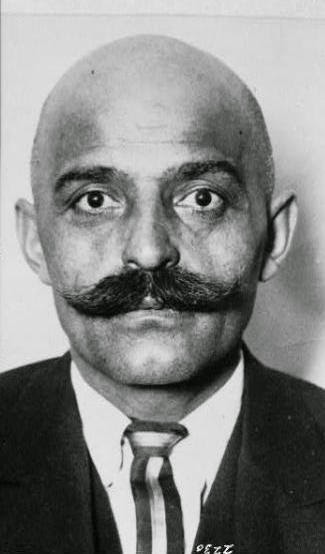 George Ivanovich Gurdjieff (Russian: Гео́ргий Ива́нович Гурджи́ев; January 13, 1866 – October 29, 1949) was an influential spiritual teacher of the early to mid-20th century who taught that most humans live their lives in a state of hypnotic "waking sleep", but that it is possible to transcend to a higher state of consciousness and achieve full human potential. Gurdjieff developed a method for doing so, calling his discipline "The Work" or "the Method". According to his principles and instructions,. Gurdjieff's method for awakening one's consciousness is different from that of the fakir, monk or yogi, so his discipline is also called (originally) the "Fourth Way"......http://en.wikipedia.org/wiki/George_Gurdjieff

"In Gurdjieff’s book Meetings With Remarkable Men he describes how his father, who came from a long line of bards (singer/storytellers) would recite ancient legends and begin discussions as to their possible extra meaning that lay hidden deep within their literal words....Gurdjieff describes one such event when his father sang to him the legend of the Babylonian hero Gilgamesh. Gurdjieff said that the twenty-first song of this legend eventually became engraved on his memory. I will tell thee, Gilgamesh,....Of a mournful mastery of the Gods:....How once, having met together,....They resolved to flood the land of Shuruppak.
.....Gurdjieff’s father, who was taught this tale from generations and generations of storytellers before him, suggested that the legend of Gilgamesh came from the Sumerians, a people more ancient than the Babylonians. Furthermore, he believed that this legend was the origin of the account of the Flood story in the Hebrew Bible.".....http://thegodguy.wordpress.com/2010/10/07/why-this-swedenborgian-likes-gurdjieff/

Some authors such as Idries Shah and John Godolphin Bennett maintain that George Ivanovich Gurdjieff's 'Fourth Way' originated with the Khwajagan...http://en.wikipedia.org/wiki/Khwajagan

The fakir, or faqir (/fəˈkɪər/; Arabic: فقیر‎ (noun of faqr)), derived from faqr (Arabic: فقر‎, "poverty"), is a Muslim Sufi ascetic in the Middle East and South Asia. The Faqirs were wandering Dervishes teaching Islam and living on alms.

"In early adulthood, Gurdjieff's curiosity led him to travel to Central Asia, Egypt, India, Tibet and Rome, before returning to Russia for a few years in 1912. .... Encounters with dervishes, fakirs and Essenes are described, culminating in an encounter with the "Sarmoung Brotherhood"....

"All roads lead to Balkh,” uttered Gurdjieff, referring to the Sufic origin of all systems. Yesai Narai writes, “Balkh is the town often associated with Padmasambhava, and Rabia and Rumi as well. Although Padmasambhava is usually thought to be Indian, it is possible that he is from the Afghanistan region also associated with his name.”.....Balk is the homeland of Baha ad-Din Naqshband, the greatest of the Khwjaghan Masters. Baha al-Din Walad of Balkh (d. 1230 CE), meaning "the splendor/glory of religion from Balkh" is the designation of the father of Jalal al-Din Balki, more commonly known as Jalal al-Rumi, famed author of the ‘Persian Qur'an/Bible’, the Mathnawi......In Balkh, Bokhara and also in the Hindu Kush a new “inner circle” of initiates was established. These great initiates were known as the Khwajagan (Persian for "Masters"). The first visible leader who appeared (during this cycle) was Yusuf Hamadani (1048-1140). This society is known for its remarkable telepathic powers. The Khwajaghan still exist today in order to transmit to segments of society a spiritual force known as baraka.....J.G. Bennet wrote a book entitled “The Masters of Wisdom,” which includes some very detailed information about the Khwajagan. Bennett received his information about the Khwajagan from Hasan Shushud (the teacher of the famous Rumi translator Dr. Nevit O. Ergin)."

"...men are born asleep, live in sleep and die in sleep, only imagining that they are awake.".... P. D. Ouspensky In Search of the Miraculous, p. 66

"Gurdjieff respected traditional religious practices, which he regarded as falling into three general categories or "ways": the Way of the Fakir, related to mastery of the physical body; the Way of the Monk, based on faith and feeling; and the Way of the Yogi, which focuses on development of the mind. He presented his teaching as a Fourth Way that integrated these three aspects into a single path of self-knowledge. Progress in the Fourth Way comes through conscious effort toward a quality of thinking and feeling that brings a new capacity to see clearly and to love"....The Reality of Being.....The Fourth Way of Gurdjieff.....by Jeanne de Salzmann

".....hearsay centers around Gurdjieff in Tibet. Was he or was he not the chief political officer of the Dalai Lama in 1904 when the British invaded Tibet? According to Achmed Abdullah, the fiction writer, Gurdjieff was the "Dordjieff" to whom the history books make passing reference, supposedly a Russian who influenced the Dalai Lama at the time of the Younghusband Expedition. Abdullah was a member of the British Intelligence assigned to spy on this "Dordjieff," and when Abdullah saw Gurdjieff in New York in 1924, he exclaimed, "That man is Dordjieff!"....http://www.gurdjieff.org/munson1.htm

"Gurdjieff certainly did travel to Tibet and speaks about his experiences there. See Voices in the Dark."

".....Chögyam Trungpa and Gurdjieff....some interesting parallels.....Both men brough a new way of inner work to the west. Both men were unabashed rebels, leaping far outside the traditional forms of their own heritage (In Gurdjieff's case, Eastern Orthodox Christianity, and in Trungpa's case, monastic Tibetan Buddhism) to offer a radically new perspective on both the method, and the meaning, of inner transformation. In the process, they alarmed and alienated most of the traditionalists around them; they were revolutionaries.....Trungpa: "In particular, my own situation is due to the fact that no one [else] could understand everything all together--both worldly and spiritual views, and how to live one's life. That is not to say I am more skilled, more learned, and more experienced in the dharma. There are many people who are more learned than I and more elevated in their wisdom. However, I have never made a separation between the spiritual and the worldly. If you understand the ultimate aspect of the dharma, this is the ultimate aspect of the world. And if you should cultivate the ultimate aspect of the world, this should be in harmony with the dharma. I am alone in presenting the tradition of thinking this way." (from The collected works of Chögyam Trungpa, Shambhala publishers, Boston & London, 2003, volume one, pgs xxxv-xxxvi.)......Gurdjieff certainly emphasized the same approach--and look at how strikingly similar the two men were. Both prodigious drinkers, adept and aggressive socializers, and notorious adulterers, they lived life in sheer defiance of our traditional concepts of "spiritual" behaviour: abstinence, purity, serenity...."...http://zenyogagurdjieff.blogspot.com/2008/05/trungpa-gurdjieff-and-apostle-paul-work.html

"....... The Sarmoung Brotherhood was an alleged esoteric Sufi brotherhood based in Asia. The reputed existence of the brotherhood was brought to light in the writings of George Gurdjieff, a Greek-Armenian spiritual teacher. Some contemporary Sufi-related sources also claim to have made contact with the group although the earliest and primary source is Gurdjieff himself.....the "Sarmoung Brotherhood", an organisation which has never been definitively identified and which Aarhus University historian Mark Sedgwick has described as "overtly fictional" and "entirely imaginary.".......The word Sarmoung uses the Armenian pronunciation of the Persian term Sarman, which may mean either "he who preserves the doctrine of Zoroaster" ....the word for bee, which has always been a symbol of those who collect the precious 'honey' of traditional wisdom and preserve it for further generations. A collection of legends, well known in Armenian and Syrian circles with the title of The Bees, was revised by Mar Salamon, a Nestorian Archimandrite in the thirteenth century. The Bees refers to a mysterious power transmitted from the time of Zoroaster......

"...The Brotherhood was also sought by Georges Gurdjieff on his journeys (pre-1912) through Southwest and Central Asia.[2][3] Describing the contents of an old letter written by a monk which he had obtained, Gurjieff writes: "Our worthy Father Telvant has at last succeeded in learning the truth about the Sarmoung Brotherhood. Their organisation actually did exist near the town of Siranoush, and fifty years ago, soon after the migration of peoples, they also migrated and settled in the valley of Izrumin, three days journey from Nivssi...."....was known to have existed somewhere in Central Asia up to the sixth or seventh century AD.......Gurdjieff goes on to relate the Sarmoung to the Aisors, descendants of the ancient Assyrians, their expulsion from Mesopotamia and the city of Ninevah......The chief monastery of the society was said to be located somewhere in the heart of Asia, about twelve days' journey (100 miles) from Bukhara by horse and donkey."....http://en.wikipedia.org/wiki/Sarmoung_Brotherhood

"Bukhara has been one of the main centres of World Civilization from its early days in 6th century BCE. From the 6th century CE, Turkic speakers gradually moved in.The region of Bukhara was a part of the Persian Empire for a long time. The origin of many of its current inhabitants goes back to the period of Aryan immigration into the region. Bukhara (Uzbek: Buxoro; Persian: بخارا‎; Russian: Бухара Bukhara; Turkish: Buhara), from the Soghdian βuxārak ("lucky place"), is the capital of the Bukhara Province (viloyat) of Uzbekistan."....http://en.wikipedia.org/wiki/Bukhara

"Izrumin...... Gurdjieff searched for a monastery of the Sarmoung in the valley of Izrumin .....they also migrated and settled in the valley of Izrumin, three days journey from Nivssi [Mosul].....from 'Meeting With Remarkable Men": "I answered that I wished at any cost to get to the valley which was once named Izrumin...... the present city of Mosul, the former capital of the country of Nievi, had once been called Nivssi......Gurdjieff finds out that Nivssi is the old name for Mosul........ a city called Nivssi referred to in the parchment was present day Mosul, and that the descendants of the Sarmoung Brotherhood were the present day Aïsors.......3 days journey from Mosul olaced it between Urmia and Kurdistan.....

"Urmia (Azerbaijani) variously transliterated as Oroumiyeh, Orūmīyeh and Urūmiyeh, also formerly known as Rezaeyeh, is a city in and the capital of West Azerbaijan Province, Iran. The city lies at an altitude of 1,330 m above sea level on the Shahar Chay river (City River). Urmia is the 10th most populated city in Iran. The population is mainly Azeri , with Kurdish, Assyrian Christian, and Armenian minorities....Also referred to as "Azerbaijani Turks" (Azərbaycan türkləri, آذربایجان تورکلری) or "Azeris" (Azərilər, آذریلر),......http://en.wikipedia.org/wiki/Azerbaijani_people