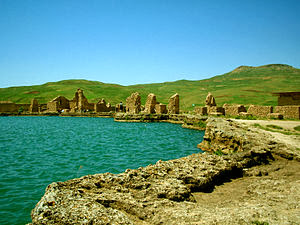 Takht-i-Suleiman (Arabic "Throne of Solomon") is a common name for various flat-topped mountains throughout the Middle East and Central Asia…..Takht-e Soleymān (Persian: تخت سلیمان‎, Takht-e Soleymān, literally "the Throne of Solomon", in earlier ancient period known as Shiz or Adur Gushnasp, literally "the Fire of the Warrior Kings") is an archaeological site in West Azarbaijan, Iran. It lies midway between Urmia and Hamadan, very near the present-day town of Takab, and 400 km (250 mi) west of Tehran…..West Azerbaijan Province (Persian: استان آذربایجان غربی‎, Ostān-e Āzarbāijān-e Gharbī and :Azerbaijani: غربی آذربایجان اوستانی) is one of the 31 provinces of Iran. It is in the northwest of the country, bordering Turkey, Iraq and Nakhchivan Autonomous Republic, and the provinces of East Azerbaijan, Zanjan and Kurdistan.The province of West Azerbaijan covers an area of 39,487 km², or 43,660 km² including Lake Urmia.

Adhurpatagan, later Arabicized to Azerbaijan….In the late 4th century AD Sassanids incorporated the area into the neighbouring Adhurpadaghan satrapy to the east….

"Iran has four Azerbaijani provinces: West & East Azerbaijan, Zanjan and Ardabil. To their north lies the independent nation of Azerbaijan, a previous Soviet Republic. All five come together to form the Greater Azerbaijan region, a region that includes Lake Urmia and the Northern Zagros mountains….http://heritageinstitute.com/zoroastrianism/urmia/

The northern extent of Greater Azerbaijan has been variously described as the Aras (Araxes) River, the Kura River and the Caucasus Mountains…During the subsequent Parthian era (1st cent. BCE to 3rd cent. CE) the Old Persian name 'Aturpatan' evolved to 'Atarpatakan' (see Greater Bundahishn 29.12). Still later, we find that in the inscriptions of Persian-Sassanian King Shapur I (r. 241 to 272 CE) and those of a contemporary Zoroastrian high priest Kartir or Kerder, we find 'Atarpatakan' named as 'Adurbaigan'. 'Adurbaigan' would then have evolved to the 'Azerbaijan' in New Persian when 'Adur' evolved to 'Azar' or 'Azer'. ….The region is known for its continuously burning natural gas fires which to the ancients must have seemed like the miraculous phenomenon of an ever-burning fire - a symbol of special importance in Zoroastrianism. In ancient texts, Azerbaijan was known as the land of fire and burning hillsides."…..http://heritageinstitute.com 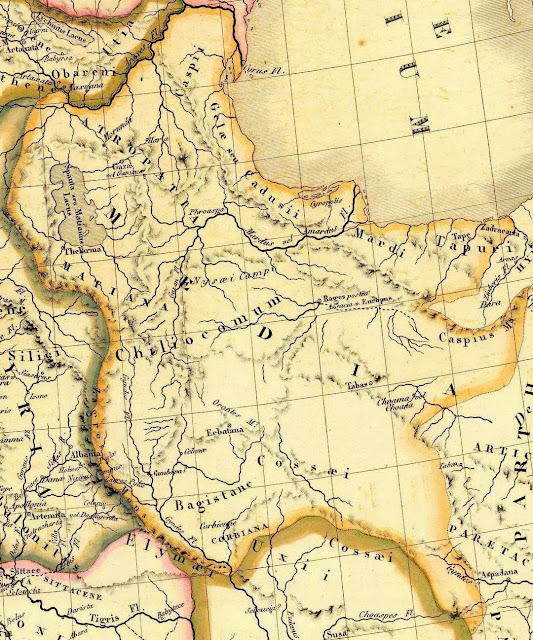 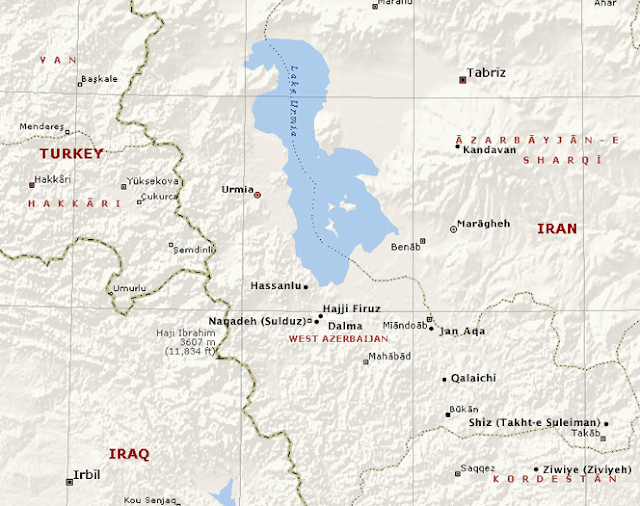 Lake Urmia (also spelt Urmiyeh, Urumiyyeh, Urmiye, Urmiya, Urmiah, Urumiah, Oroumiah or Ormieh) lies in the northwest corner of present-day Iran, close to Iran's present border with Turkey and Iraq. The lake also sits on the border between the Iranian provinces of West and East Azerbaijan….Medieval Iranian literature (catalogued by A. W. Jackson in Persia Past and Present and Zoroaster, the Prophet of Ancient Iran), strongly links the region around Lake Urmia with Zoroastrianism - so much so, that they make Urmia the birthplace of Zoroastrianism. These assertions lend credence to the notion that Urmia was home to the ancestors of the southern Persians - early Persians who were the bearers of the torch of Zoroastrian heritage."….http://heritageinstitute.com 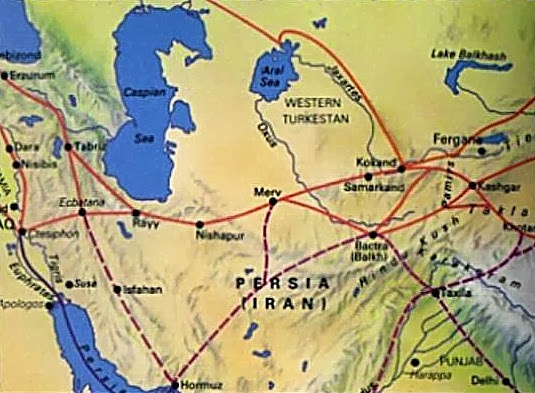 One arm of the Aryan trade roads (the Silk Roads) went west from Balkh (Bactria) in Central Asia, through Marv, Nishapur and Rai, skirting the Alborz / Elburz mountain range (that runs along the southern shores of the Caspian), to present-day Tabriz just east of upper Lake Urmia….The trade road that ran from Khorasan & Balkh (Ariana / Aria) to Babylon and Susa - from the northeast to the southwest of present day Iran - was in medieval times called the Great Khorasan Road. One arm of the road ran through Ecbatana (Hamadan) and Kermanshah, beside the rivers Qareh Su and Diyala to Babylon. This could have been the route for Median (as well as Persian) migration. …..

The Lake Urmia region has a wealth of archaeological sites that were home to some of the most advanced Neolithic communities known. Archaeological excavations of settlements in the Lake Urmia area have found artefacts that date from the Neolithic (New Stone) age, that is, from about 7,000 BCE. A number of these settlements were destroyed in the Iron Age around 800 BCE, a dating that coincides with records of devastating Assyrian raids in the region….The Ash Hills of Urmia…..There are sixty-four ash hills scattered around Lake Urmia - a dozen or so within the immediate vicinity of the city of Urmia - each hill rising from a small natural elevation. The hills were said to have been formed from ashes from ancient fire shrines and are called 'hills of the Fire-worshipers' by the local people,…..http://heritageinstitute.com

"…another ash hill called Lakki was located seventeen miles north of Urmia and that six miles east of Lakki was the ash hill of Termani. In Jackson's time, the Termani cone-shaped mound was still fairly intact and 'the outline of an old building's foundation could be traced on the ground nearby'. The remaining stones from the ruined building were large enough to make the villagers wonder how they could have been moved into place. They remarked that in the 1880's, after a shaft had been sunk into the hill, a large image was discovered buried in the ashes. The local Muslims destroyed this statue, believing it to be an idol."….http://heritageinstitute.com/zoroastrianism/urmia/

Hasanlu dates from about 7,000 BCE, (the Neolithic era or New Stone Age). It was occupied continuously until its destruction around 825 BCE …Hasanlu's site consists of a 25m high central artificial mound called the citadel, with massive fortifications and paved streets. The citadel is surrounded by a low outer town, 8m above the surrounding plain….archaeologists have speculated that the hall is a fire temple. ….http://heritageinstitute.com/zoroastrianism/urmia/

"Relationship between the mythical Sea of Chichest and Urmia lake…..The subject of Chichest sea and its identification as Urmieh lake has always caused ‎some argumentation among scholars. Investigation of documents and myths incorporated ‎in Avesta, shows that chichast was at first a deep, wide and stormy sea. The mythical ‎king Khosro praised the goddess Anahita and the angel derwasp on its shore to arrest his ‎enemy Afrasyab. Later, Zoroastrian clergy used the myth as a base to innovate a wide ‎range of legends during Achaemenids and Sassanid period. Therefore, some new legends ‎were ascribed to the sea, such as the foundation of Azargoshasb fire temple on its shore, ‎and ruin of pagan’s temple by the king. In Middle Persian texts, the two seas were known ‎as equal. Its reason should be searched in the authority of median clergy and trying to ‎find legitimacy by Sassanid monarchs. Even Greek and Armenian sources have attributed ‎an important role to this lake in the resurrection day. ‎ ….Additionally the etymology and meaning of its name is obscure. In this area, two ‎probabilities are suggestible: 1) it is a past participle (čaē.čas.ta) from indo-European root ‎kand- “shining, to be white”, skr: candra, lat: cicindēla. So it can means as “white, ‎shining”, or 2) from old Iranian root kas “to see” and as past participle “worth seeing”. ‎"….by khosro gholizadeh….http://www.academia.edu/3046496/Relationship_between_the_mythical_see_of_Chichest_and_Urmia_lake

"A glimpse into ancient Persian cosmology is the royal city of Echbatana (Hamadan, Agbatana, Ekbatana)[50E 32N] built in 800 BC by King Deioces (Daiukku) of the Medes...Seven concentric circles within walls, each higher than the preceding wall as one passed toward the center hill where the palace (KALA, CAHLA) of the Emperor stood. The 7th and highest wall was painted gold (sun)...the 6th was painted silver (moon)...the 5th wall was painted orange...the fourth was painted blue...the third was painted red...the second black...and the outermost wall was painted white. Orange was the fiery morning 'asman', blue the noonday 'asman', red for the evening asman. The array of colors chosen for the encircling walls of the royal city was similar to that of the robe of warriorhood and sovereignty described in the Denkart…...East Azerbaijan Province, Iran" (Leroy Campbell: 1968...pg 97)..