"For many centuries, the Orkhon Valley was viewed as the seat of the imperial power of the steppes. The first evidence comes from a stone stele with runic inscriptions, which was erected in the valley by Bilge Khan, an 8th-century ruler of the Göktürk Empire. Some 25 miles to the north of the stele, in the shadow of the sacred forest-mountain Ötüken, was his Ördü, or nomadic capital. During the Qidan domination of the valley, the stele was reinscribed in three languages, so as to record the deeds of a Qidan potentate…..Mountains were considered sacred in Tengriism as an axis mundi, but Ötüken was especially sacred because the ancestor spirits of the khagans and beys resided here. Moreover, a force called qut was believed to emanate from this mountain, granting the khagan the divine right to rule the Turkic tribes. Whoever controlled this valley was considered heavenly appointed leader of the Turks and could rally the tribes. Thus control of the Orkhon Valley was of the utmost strategic importance for every Turkic state. Historically every Turkic capital (Ördü) was located here for this exact reason. There were many houses by the bank but they are all gone now." 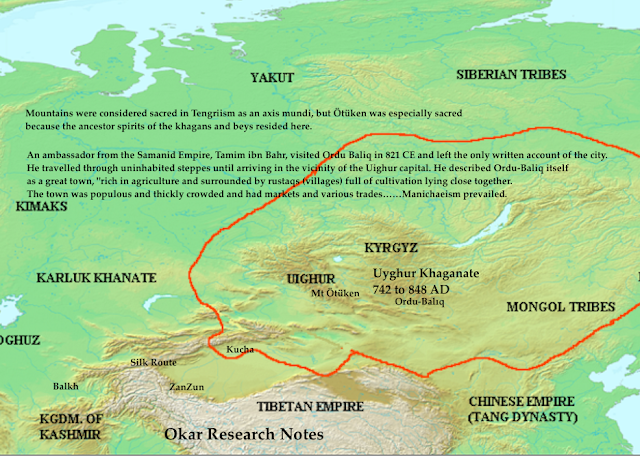 "An ambassador from the Samanid Empire, Tamim ibn Bahr, visited Ordu Baliq in 821 CE and left the only written account of the city. He travelled through uninhabited steppes until arriving in the vicinity of the Uighur capital. He described Ordu-Baliq itself as a great town, "rich in agriculture and surrounded by rustaqs (villages) full of cultivation lying close together. The town had twelve iron gates of huge size. The town was populous and thickly crowded and had markets and various trades." He also reported that amongst the townspeople, Manichaeism prevailed….."….http://en.wikipedia.org/wiki/Ordu-Baliq

"The most striking detail of his description is the golden yurt or tent on top of the citadel where the khagan held court……'He says that from (a distance of) five farsakhs before he arrived in the town (of the khaqan) he caught sight of a tent belonging to the king, (made) of gold. (It stands) on the flat top (sath) of his castle and can hold (tasa') 100 men. ”— Minorsky, translation of reports on Tamim b. Bahr al-Muttawwi'i's account…..The golden tent was considered the heart of the Uyghur power, gold being the symbol of imperial rule.The presence of a golden tent is confirmed in Chinese historical accounts where the Kirghiz khan was said to have vowed to seize the Uyghurs' golden tent."…..http://en.wikipedia.org/wiki/Ordu-Baliq

"Golden Age of the Uyghur Qaghanate:…..After Bayan Chor's death, Bögü Qaghan (his title was Teñride Qut Bolmïsh Il-Tutmush Alp Külüg Bilge Qaghan) became the new ruler. At that time, China fell into a civil war, before the Uyghurs could intervene, the rebellions were put down but the Uyghurs became very influential in Tang China. In 762, Bögü Qaghan launched a campaign against the Tibetans with the Tang and he managed to re-capture Luoyang (the Western capital of Tang) from the Tibetans. During the campaign, Bögü Qaghan met with Manikheist priests and soon, he converted to Manicheism. After this, Manikheism became the official religion of the Uyghur Qaghanate. "….http://www.allempires.com/article/index.php?q=The_Uyghur_Empire

"In 744, after the defeat of the last Göktürk Kaghan by the Uigur-Qarluk-Basmyl alliance, the Uyghurs under Bayanchur Khan (Bayan Çor) established their imperial capital Ordu Baliq on the site of the old ördü ("nomadic capital"). Ordu-Baliq flourished until 840, when it was reduced to ruin by the invading Yenisey Kyrgyzes….The capital occupied at least 32 square kilometers. The ruins of the palace- or temple complex, which include the 10-meter-high wall, a 12-meter citadel in the southwest corner and a 14-meter-high stupa in the center, clearly indicate that Ordu Baliq was an affluent and large town. The urban area may be divided into three main parts. The central part consisting of numerous buildings surrounded by a continuous wall forms the biggest part. Ruin of a large number of temples and dwelling houses are to be found to the south beyond the center. The Khan's residential palace, which was also ringed by walls on all sides, stood in the northeastern part of the town, where the Russian archaeologist Nikolay Yadrintsev discovered a green granite monument with a statue of a dragon perched at the top and bearing a runic inscription glorifying the khagans"….http://en.wikipedia.org/wiki/Ordu-Baliq

"The Karluks were a branch of the Turgesh or aboriginal Altaians…….The first Chinese reference to the Karluks (644 AD) labels them with a Manichaean attribute: Lion Karluks ("Shi-Gelolu", "shi" stands for Sogdian "lion"). The "lion" (Turkish: arslan) Karluks persisted up to the time of the Mongols…..In the Early Middle Age, organized as the Uch-Karluks (Three Karluks) union, composed of Karluks, Chigils, and Yagma tribes, they were members of the Göktürk Kaganate. After the split of the Kaganate around 600 into the Western and Eastern Kaganates, the Uch-Karluks remained in the Western Turkic Kaganate under a non-autonomous home rule, as the members of the five Tele (see: Tiele) tribes that did not receive autonomy: the Karluk, Yagma, Kipchak, Basmyl and Chuban…."

"In 630, the Aru-Kagan (Chinese Helu) of the Eastern Turkic Kaganate was captured by the Chinese. His heir apparent, the "lesser Khan" Khubo, escaped to Altai with a major part of the people and 30,000 soldiers. He conquered the Karluks in the west, the Kyrgyz in the north, and took the title Ichju Chebi Khan. The Karluks allied with the Tiele and their leaders the Uyghurs against the Turkic Kaganate, and participated in enthroning the victorious head of the Uyghur (Toquz Oghuz). After that, a smaller part of the Karluks joined the Uyghurs and settled in the Bogdo-Ola mountains in Mongolia, the larger part settled in the area between Altai and the eastern Tien Shan."

"In 650, at the time of their submission to the Chinese, the Karluks had three tribes: Meulo, Chjisy (Popou), and Tashili. On paper, the Karluk divisions received Chinese names as Chinese provinces, and their leaders received Chinese state titles. Later, the Karluks spread from the valley of the river Kerlyk along the Irtysh River in the western part of the Altay to beyond the Black Irtysh, Tarbagatai, and towards the Tien Shan……By the year 665 The Karluk union was led by a former Uch-Karluk bey with the title Kül-Erkin, now titled "Yabgu" (prince), who had a powerful army. The Karluk vanguard left the Altay region and at the beginning of the 8th century reached the banks of the Amu Darya…..Famed for their woven carpets in the pre-Muslim era, they were considered a vassal state by the Tang Dynasty after the final conquest of the Transoxania regions by the Chinese around 744. The Karluk rose in rebellion against the Göktürk, then the dominant tribal confederation in the region, in about 745, and established a new tribal confederation with the Uygur and Basmyl tribes. They remained in the Chinese sphere of influence and an active participant in fighting the Muslim expansion into the area, up until their split from the Tang in 751. Chinese intervention in the affairs of Western Turkestan ceased after their defeat at the Battle of Talas in 751 by the Arab general Ziyad ibn Salih. The Arabs dislodged the Karluks from Fergana." 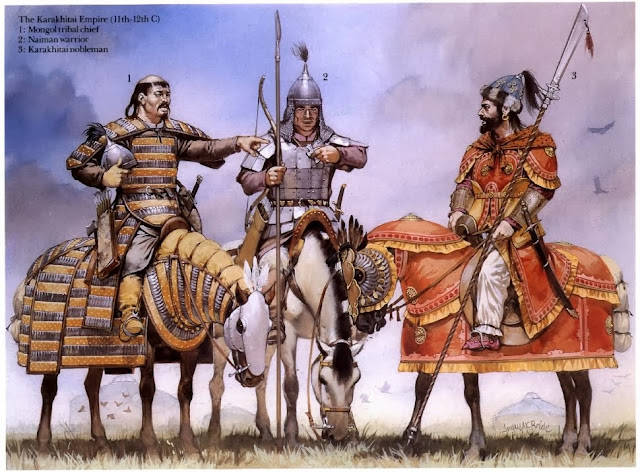 " The Naimans are most often classified as a Turkic people from Sekiz Oghuz (means "Eight Oghuz" in Turkic),. Like the Khitans and the Uyghurs, many of them were Nestorian Christians or Buddhists."….http://en.wikipedia.org/wiki/Naimans

"Later Shambhalists would identify the ancient Uighur kingdom of Khocho, centered around the Turfan Depression, as one of the prime candidates for the physical location of Shambhala….. the Uighur kingdom of Khocho, located at the northern edge of the Taklamakan, has often been posited as the "historical" Shambhala. To reach Khocho from the southern edge of the Taklamakan would indeed have taken four or more months, depending on what route the traveler took."