Paropamisadae (Greek: Παροπαμισάδαι) or Paropamisus (/ˌpærɵˈpæmɨsəs/; Greek: Παροπαμισσός) was the ancient Greek name for a region of the Hindu-Kush (Caucasus Indicus) in eastern Afghanistan, centered on the cities of Kabul and Kapisa (modern Bagram)…..The Paropamisadae was located north of Arachosia and Drangiana, east of Aria, south of Bactria, and west of Kashmir. There were two main rivers flowing through the land, the Coas or Cophen (Κωφήν) and the Dorgamanes (Δοργαμάνης) or Orgomanes (Ὀργομάνης) farther north.....http://en.wikipedia.org/wiki/Paropamisadae 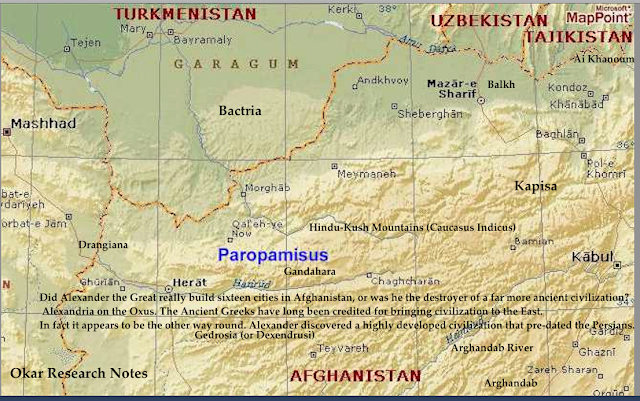 "In the ancient Buddhist texts, the Mahajanapada kingdom of Kamboja compassed the territories of Paropamisus and extended to the southwest of Kashmir as far as Rajauri. The region came under Achaemenid Persian control in the late 6th century BC, either during the reign of Cyrus the Great or Darius I…..In the 320s BC, Alexander the Great conquered the entire Persian Empire, beginning the Hellenistic period. The Greek name Παροπαμισάδαι or Παροπαμισσός was used extensively in Greek literature to describe the conquests of Alexander and those of the Greco-Bactrian and Indo-Greek kings, from the 3rd to the 1st centuries BCE. (The name possibly comes from an Avestan expression for "higher than an eagle can fly")...... After Alexander's death in 323 BC, the area came under control of the Seleucid Empire, which gave the region to the Mauryan Dynasty of India in 305 BC. After the fall of the Mauryans in 185 BC, the Greco-Bactrians under King Demetrius I annexed the northwestern regions of the former Mauryan Empire, including Paropamisadae, and it became part of his Euthydemid Indo-Greek Kingdom. The Eucratidians seized the area soon after the death of Menander I, but lost it to the Yuezhi or Tocharians around 125 BC."…..http://en.wikipedia.org/wiki/Paropamisadae

"The major cities of the land were the city of Ortospana (Ὀρτοσπάνα) or Carura (Κάρουρα), probably identifiable with Kabul, Gauzaca (Γαύζακα), probably modern Ghazni, Capissa (Καπίσσα) in the northeast, and Parsia (Παρσία), the capital of the Parsii….The name Paropamisus Mountains was formerly used by Western geographers and geologists during the 19th and 20th centuries (and perhaps earlier) to describe the Siah Koh, Safed Koh, Chalap Dalan, and Malmand Mountain Ranges of western Afghanistan."….http://en.wikipedia.org/wiki/Paropamisadae

"Arachosia /ærəˈkoʊsiə/ is the Hellenized name of an ancient satrapy in the eastern part of the Achaemenid, Seleucid, Parthian, Greco-Bactrian, and Indo-Scythian empires. Arachosia was centred on Arghandab valley in modern-day southern Afghanistan, and extended east to as far as the Indus River in modern-day Pakistan. The main river of Arachosia was called Arachōtós, now known as the Arghandab River, a tributary of the Helmand River…."Arachosia" is the Latinized form of Greek Ἀραχωσία - Arachōsíā. "The same region appears in the Avestan Vidēvdāt (1.12) under the indigenous dialect form Haraxvaitī- (whose -axva- is typical non-Avestan)." In Old Persian inscriptions, the region is written h-r-v-u-t-i. This form is the "etymological equivalent" of Vedic Sanskrit Sarasvatī-, the name of a (mythological) river literally meaning "rich in waters/lakes" and derived from sáras- "lake, pond." (cf. Aredvi Sura Anahita)…."Arachosia" was named after the name of a river that runs through it, in Greek Arachōtós, today known as the Arghandab, a left bank tributary of the Helmand…..Arachosia bordered Drangiana to the west, Paropamisadae (i.e. Gandahara) to the north, a part of ancient India to the east, and Gedrosia (or Dexendrusi) to the south. Isidore and Ptolemy (6.20.4-5) each provide a list of cities in Arachosia, among them (yet another) Alexandria, which lay on the river Arachotus….http://en.wikipedia.org/wiki/Arachosia

"In his list, Ptolemy also refers to a city named Arachotus (English: Arachote /ˈærəkoʊt/; Greek: Ἀραχωτός) or Arachoti (acc. to Strabo), which was the earlier capital of the land. Pliny the Elder and Stephen of Byzantium mention that its original name was Cophen (Κωφήν). Hsuan Tsang refers to the name as Kaofu. This city is identified today with Arghandab which lies northwest of present-day Kandahar."….http://en.wikipedia.org/wiki/Arachosia

From Phrada, Alexander pressed on during the winter of 330-329, over the mountains past the site of modern Kabul, Afghanistan, into the country of the Paropamisadae, where he founded Alexandria by the Caucasus….

"Alexander's Lost World (2013)….. David Adams is best known for his investigative work and his latest work "Oxus - Riddles of an Ancient River" shot in Afghanistan and Turkmenistan scheduled in early 2009….Did Alexander the Great really build sixteen cities in Afghanistan, or was he the destroyer of a far more ancient civilization? David Adams goes in search of the most alluring of them all - Alexandria on the Oxus. The Ancient Greeks have long been credited for bringing civilization to the East. In fact it appears to be the other way round. Alexander discovered a highly developed civilization - a lost world - that pre-dated even the Persians. As Adams unravels the mysteries of the Oxus Civilizations, its great fortress cities are dramatically recreated in stunning CGI. Traveling through the most remote regions of Afghanistan unarmed, Adams and his Cameraman live as everyday Afghans gaining a most unique insight into the people and our shared heritage…..
EPISODE 2 – THE MOTHER OF ALL CITIES….Crossing into Afghanistan in search of the lost city of Bactra, Adams uses the Ancient Greek accounts as a guide to try and locate Alexander’s fabled Central Asian Capital. Long thought to be the citadel of Balkh, the Greeks accounts appear to describe a different city entirely. In the markets beneath the citadel, he finds evidence to suggest Bactra may lie out towards the Oxus River at the end of a great delta. 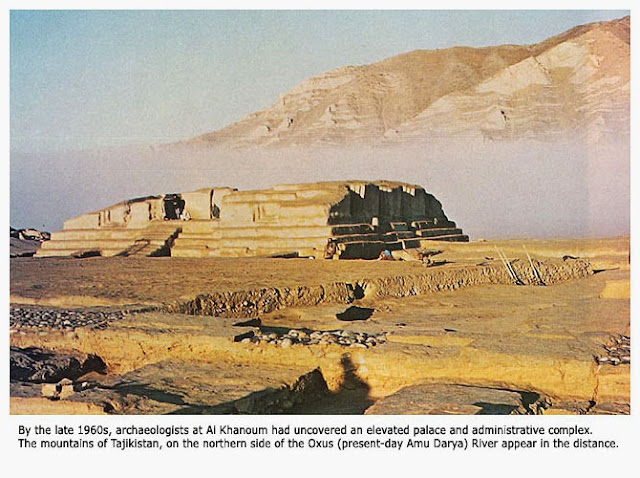 Entering Taliban territory, David and his cameraman, Greg, discover the remains of a vast defensive network of walls and fortresses more than 2,500 years old. Bactra though remains elusive. Then a chance meeting leads David into the legendary Paraopamisus Mountains of the Greeks. Entering Taliban territory once again, he follows a system of archaic tunnels that lead into a remote valley. As he explores an abandoned archaeological dig site, he considers the Greek records carefully – is this the lost city of Bactra?"….http://www.imdb.com/title/tt2935890/?ref_=nm_flmg_dr_1