"Shaki, Azerbaijan …… "the name of the town goes back to the ethnonym of the Sakas, who reached the territory of modern day Azerbaijan in the 7th century B.C. and populated it for several centuries. In the medieval sources, the name of the town is found in various forms such as Sheke, Sheki, Shaka, Shakki, Shakne, Shaken, Shakkan, Shekin…..Shaki is surrounded by snowy peaks of the Greater Caucasus….There are traces of large-scale settlements in Shaki dating back to more than 2700 years ago. The Sakas were an Iranian people that wandered from the north side of the Black Sea through Derbend passage and to the South Caucasus and from there to Asia Minor in the 7th century B.C. They occupied a good deal of the fertile lands in South Caucasus in an area called Sakasena. The city of Shaki was one of the areas occupied by the Sakas. …..

The word "Āzar" (Persian: آذر‎) means Fire ……..Baijan was originally rendered as "Pāyegān" (Persian: پایگان‎), meaning Guardian/Protector (Āzar Pāyegān = "Guardians of Fire") (Persian: آذر پایگان‎). This etymology directly links the country to its ancient religion, zorastrianism. After the Muslim conquest of Persia many Persian words lost their original form as in Arabic there are no letters for pronouncing "G / P / ZH / CH"; hence, "Azar Paigān" came to be known as Azarbaijan . 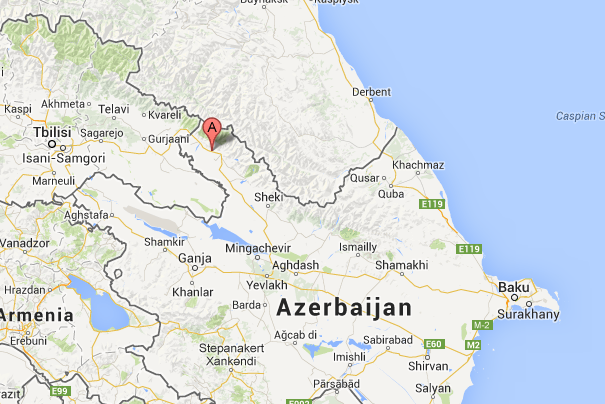 Greater Caucasus Wall…..(5-7th century AD)…..Besides the Chinese Wall, the Greater Caucasus Wall was also written a lot about in ancient times. Some sources call it Kala Sur (Great Wall). Starting from the 19th century, the wall, stretching from Katekh to Shaki, is called the Zagatala wall. Only fragments of it along the Balakan-Zagatala road, in Katekh, Masekh, Goyam, Tala villages have survived. It is made of pebble stone. The 3-4-meter high and 140-145-cm thick wall was built in the time of Sassanid rulers Gubad (488-531) and Khosrov Anushiravan (531-579) to prevent attacks from the north. After occupying the region in the 19th century, the Russians also used it for defensive purposes…..Katex at the foot of Caucasian mountains and the most populous municipality, except for the capital Balakən, in the Balakan Rayon of Azerbaijan. The village takes its name from Turkic gədik (which is in local dialect sounds like gədıx) for nearby mountain passageway, which has been used for centuries to cross Caucasian mountains from its northern side to Southern…..Shaki is situated in northern Azerbaijan on the southern part of the Greater Caucasus mountain range, 325 km (202 mi) from Baku. ...http://discoverazerbaijan.az/en/balaken/

The earliest evidence of human settlement in the territory of Azerbaijan dates to the late Stone Age and is related to the Guruchay culture of the Azykh Cave.The Upper Paleolithic and late Bronze Age cultures are attested in the caves of Tağılar, Damcılı, Zar, Yataq-yeri and in the necropolises of Leylatepe and Saraytepe……Early settlements included the Scythians in the 9th century BC…..Azerbaijan: Early History: Persian and Greek Influences". U.S. Library of Congress

"The original etymology of this name is thought to have its roots in the once-dominant Zoroastrian religion. In the Avesta, Frawardin Yasht ("Hymn to the Guardian Angels"), there is a mention of âterepâtahe ashaonô fravashîm ýazamaide, which literally translates from Avestan as "we worship the Fravashi of the holy Atropatene"….Atropates ruled over the region of Atropatene (present Iranian Azerbaijan). The name "Atropates" itself is the Greek transliteration of an Old Iranian, probably Median, compounded name with the meaning "Protected by the (Holy) Fire" or "The Land of the (Holy) Fire"…..Darmesteter, James (2004). "Frawardin Yasht". Avesta Khorda Avesta: Book Of Common Prayer (reprint ed.). Kessinger Publishing. p. 93. ISBN 978-1-4191-0852-5. 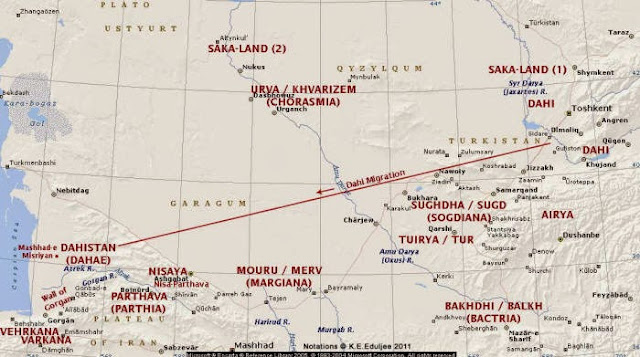 "The Saka (Old Persian Sakā; Sanskrit शाक Śāka; Greek Σάκαι; Latin Sacae; Old Chinese: *Sək) were a Scythian tribe or group of tribes of Iranian origin…..Greek and Latin texts suggest that the term Scythians referred to Iranian tribes from the much more extensive region of Scythia, which included parts of Eastern Europe and Central Asia." 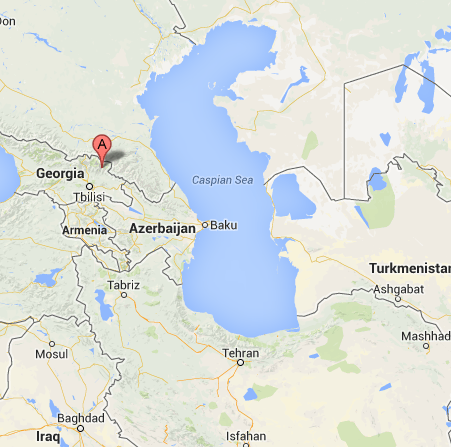 Moon and Sun faith temples….."All history sources provide extensive information about Alban temples in a settlement on the Ganikh river on the border with Iberia. In ancient times, local residents worshipped the Moon and the Sun….With its 9-meter internal columns, the temple is a 5th century Caucasian Albania monument. There are crosses of diffe­rent forms on external and internal walls of the temple. The cross was a symbol fire-worshippers engraved on tombsto­nes and temples. Following Islam, anci­ent Albanians remained committed to their religion for a long time and led sec­luded life in remote places. Such temples served as shelters for dervishes who led ascetic lifestyle. ….http://discoverazerbaijan.az/en/balaken/

Iberia….."An ancient region of Transcaucasia roughly equivalent to the present-day Republic of Georgia. Iberia was allied to Rome and later ruled by a Persian dynasty. It became a Byzantine province in the sixth century a.d.

Ojag….."Shrines are known as “Ojag” in the wes­tern zone and water sources near them are said to have miraculous power. The biggest Ojag is the Hachagaya. People from all surrounding districts visit the place. There are many sanctuaries known as Ojag (fire). Some signs and rituals of fire-worshipping have been preserved up to now. Local people say “I swear to fire”, which is evidence of how ancient traditions are preserved. It is surprising that people remain committed to some rituals although they run counter to Is­lamic beliefs. Ancient Huns, Assyrians and the Oghuz considered the family sacred and referred to it as “Ojag” while the head of the family was called “pir” (sacred)."…. hearth – also called ojag in Azerbaijan – has very important meaning. In Azerbaijan, ojag basically stands for, not just for fire, but it’s also where you will feel warm. Or, in another words, family house. It is very important to have for each family their own ojag. This why Azerbaijan called “land of fire.” Before Muslim religion this country people worshipped fire......http://discoverazerbaijan.az/en/tovuz/

"…various Saka groups, Saka being a general term, inhabit the northern plains that stretch from the Dahae lands that lie to the east of the Caspian Sea all the way to Aria (today's Herat Afghanistan), and that between these Saka and the southern kingdoms of Hyrcania (Varkana/Gorgan), Nesaea (Nisa), the plains of the Parthians (plains just north of the Kopet Dag, Bactria (Northern Afghanistan) and Aria lies a great desert that some of the northern predatory Saka tribes crossed by long marches to raid the kingdom along the south of the desert and particularly Varkana, Nisa, and the Parthian plains. The Saka who lived beyond the Jaxartes River (Syr Darya) coincides with Saka Para-Darya, the 'Saka across the river'. The name Aparni* (see above) is found in the Middle Persian Zoroastrian text, the Bundahishn as Aparnak, one of the six male children of the legendary Saka king, paladin and champion of Iran-shahr, Sam, Rustam's grandfather. Aparnak was given over-lordship of the land of Aparshahr derived from Aparnak-shahr. The Aparni were apparently a royal house of the Dahi. "……http://www.heritageinstitute.com/zoroastrianism/saka/

Sacred mountains…..
Mount Babadagh - Babadagh (Grandfather Mountain) is the fourth highest peak in the Caucasus in Azerbaijan at 3,629 meters. It is located north of Ismayilli. At the top is a "pir" (sacred place).
Mountain Avey - Avey Mountain is one of the peaks and a white-greyish ridge in the Small Caucasus Mountains located between Georgia and Gazakh district. It is 12 km away from the village of Dash Salahli. Avey means "house of the moon".
Mount Goyazan - is a mountain in northwestern Qazakh Rayon of Azerbaijan. According to ancient local beliefs mountain named because of its loneliness and being directed to sky. Goyazan means "Skycrusher".
Khinalug - is a mountain where Khinalig people live. Before Islam they were pagan and worshipping "their own fire god".