All quotes are from: "Margus: Mystery and Truth of the Great Culture" by Viktor Sarianidi (2009) 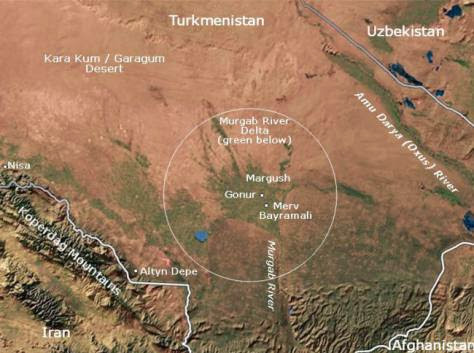 "All the known temples of Margiana and Bactria refer to the 'pagan', pre-Zoroastrian period and we do not know whether they still existed after the reforms of Zoroaster (c. 7th Century BC)….It is believed that Nush-i-Djan is the earliest among the known temple constructions that had probably existed before the reforms of Zoroaster. The un-completed temple of the Gonur temenos mat also testify to the existence of pre-Zoroastrian temples in Margiana."…(page 245) 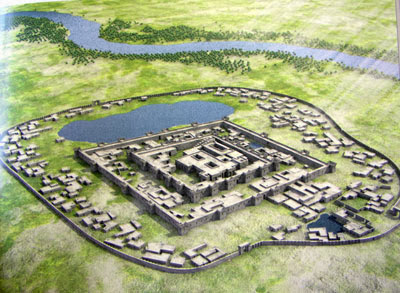 "…Seven temple constructions were recorded at North Gonur. These were: Temple of Fire, Temple of Water, Temple of Soma/Haoma, Temple of Sacrifices, Temple of Mitra-Sun, and Temple of Communal Eating. Their construction is referred to the last centuries of the 3rd mil BC…..The Bronze Age occurred roughly between 3000 BC and 2500 BC. ....that is to the Akkadian and post-Akkadian periods.'….(page 246)

Temple of Fire:…."…located inside the Palace at the eastern facade…here four temples were situated one on top of the other…the altars appeared to be placed in a secret place behind a blind wall….in Margiana such a practices was traced at Tepe Nush-i-djan) up to the end of the second millenium-middle of the first BC….one may assume that this basic tradition continues even in our day when only priests can watch the burning fire in the altar (Boyce)."…in the Temple of Fire only rectangular altars associated with the cult of eternal flame were known….(page 258/260)

Cult Hearths…"The Margiana tribes seemed to place a special value on fire. …the Palace and Temple complex of North Gonur appeared to be overcrowded with the cult hearths….archaeologist concluded that it is common practice to devote each sacrifice to a particular deity who is called by name with the proper ritual words…"….(p 258) 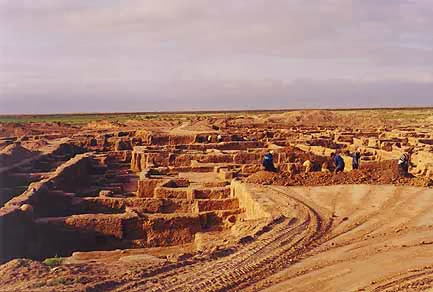 'Pagan' Altars….."Various altars, differing in form and purpose, were built simultaneously with the construction of monumental temples in Margiana. In-pre-Zoroastrian time the altars were situated at the level of a seated man….when they used meat for sacrifices it was in the form of small and very fat pieces that priests placed directly on the fire….in the Avesta it is cleary said that the Gods were looking only for the 'soul' of a sacrifice, that is, they could only be satisfied by the aromatic smell….modern Zoroastrian priests cut various fruit and vegetables for the favor of the Gods…"…(page 260

"….from the very beginning and during most of the 2nd mil BC, altars were never placed inside the buildings, but only in the open air."….(page 260)

"…the latest of the known temples, Togolok-21, had altars of 'eternal fire' and in the opposite corner two round altars….hardened remains of melted fat and milk was found….the smoke went up to the gods." (page 261)

Temple of Water…'the tribes of Margiana gave to water no less ritual value that fire…..special pools were made in front of all four entrances of the Outer Walls and the square of the palace and temples…ritual water ceremonies and ablutions ….water came directly from the Murghab River via a complex drainage system of ceramic pipes that filtered and cleaned it for offerings….."….(page 266)

"In the Avesta, waters are called 'Wives of Ahura Mazda' and the most ancient jashts is dedicated to Ardvi Sura, the goddess of rivers and waters….worship of water and water routes were deeply rooted in the Indo-Aryans."….(page 266)

"…at Taht-i-Suleiman….a natural lake and a temple are united in one complex. There is a similar situation at Kuhi-Hvadja with a temple built on the bank of a lake and also in Djarkutan (North Bactria 2nd mil BC)."…(page 267)

Temple of Soma-Haoma…." the ritual drink of soma-haoma played an important role in the life of the ancient people of Margiana…the Avesta as well as the Rig-Veda say that the ritual beverage soma-haoma was used mainly by priests and archaeological material illustrates this….the cult beverage was produced in very small amounts."…..(page 277)

White Rooms….."…the so called 'white rooms' got their names from the white gypsum plaster that coated all of the surfaces, including the floors…..these rooms were used for the final preparation of the hallucinogenic haoma-soma drink….traces of ephedra, hemp and poppy were found….the prepared drink was poured into specially made cups…."….(page 278)

God of Thunder….."in the Rig-Veda the god of thunder takes a baby from his wife and takes him to the sky where he wants him to become a god of soma-haoma…..in south Bactria from one of the bronze age graves, a vessel with a sculpted frieze with the same motif"…..(page 279)

The Tree of the World and the Varukasha Sea…..'Copper bronze mirrors from ancient plundered Bactrian graves…(page 288)….ritual vessels …the world tree with two birds in its branches is mentioned in both the Avesta and the RigVeda…..this myth was popular among the Indo-Aryan tribes long before they separated into two branches…..liquid represented the world ocean Varukasha where in the center high on top of the mountain was the 'Tree of All Seeds'….(the world tree)….they myth speaks of a pair of birds in the tree."…(page 290)