"The terms Oxus civilization and Bactria–Margiana Archaeological Complex (BMAC) both designate a Bronze Age civilization of Central Asia. The civilization, which dates to ca. 2500–1500 BC, was developed in present day northern Afghanistan, eastern Turkmenistan, southern Uzbekistan and western Tajikistan, centered on the upper Amou Darya (Oxus River). Bactria was the Greek name for the area of Bactra (modern Balkh), in what is now northern Afghanistan, and Margiana was the Greek name for the Persian satrapy of Margu, the capital of which was Merv, in modern-day southeastern Turkmenistan." 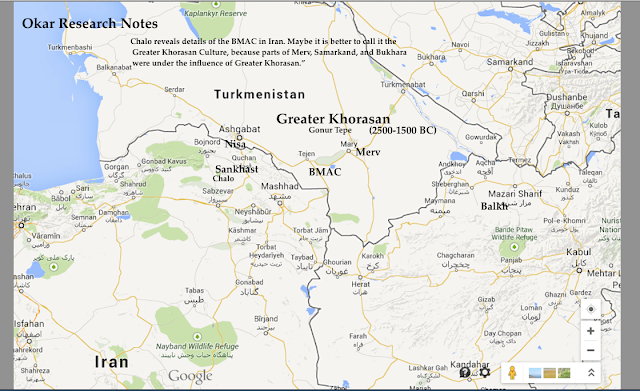 "Gonur Tepe, was once the heart of a vast archipelago of settlements that stretched across 1,000 square miles of Central Asian plains. Although unknown to most Western scholars, this ancient civilization dates back 4,000 years—to the time when the first great societies along the Nile, Tigris-Euphrates, Indus, and Yellow rivers were flourishing.....Thousands of people lived in towns like Gonur with carefully designed streets, drains, temples, and homes. To water their orchards and fields, they dug lengthy canals to channel glacier-fed rivers that were impervious to drought. They traded with distant cities for ivory, gold, and silver, creating what may have been the first commercial link between the East and the West. They buried their dead in elaborate graves filled with fine jewelry, wheeled carts, and animal sacrifices. Then, within a few centuries, they vanished."....http://discovermagazine.com/2006/nov/ancient-towns-excavated-turkmenistan

"Raphael Pumpelly (1837-1923)….Champion of a Central Asian Cradle of Civilization……More than a century ago an unlikely geologist from New York put forth a proposition that "the fundamentals of civilization - organized village life, agriculture, the domestication of animals, weaving," (including mining and metal work) "originated in the oases of Central Asia long before the time of Babylon." …..Raphael Pumpelly arrived at this conclusion after visiting Central Asia as a geologist and observing the ruins of cities on the ancient shorelines of huge, dried inland seas. By studying the geology of the area, he became one of the first individuals to investigate how environmental conditions could influence human settlement and culture. Pumpelly speculated that a large inland sea in central Asia might have once supported a sizeable population. He knew from his travels and study that the climate in Central Asia had become drier and drier since the time of the last ice age. As the sea began to shrink, it could have forced these people to move west, bringing civilization to westward and to the rest of the world. He hypothesized …..Such assertions that civilization as we know it originated in Central Asia sounded radical at a time when the names of Egypt and Babylon, regions connected to the Bible, were considered to be the cradle of civilization. But Raphael Pumpelly was persistent. Forty years after his first trip to Central Asia, he convinced the newly established Andrew Carnegie Foundation to fund an expedition. Since the Russians controlled Central Asia, he charmed the authorities in Saint Petersburg into granting him permission for an archaeological excavation. The latter even provided Pumpelly with a private railcar. At the age of 65, Pumpelly was given the opportunity to prove his theory and he wasted no time in starting his work."…..http://www.heritageinstitute.com/zoroastrianism/nisa/anau.htm

"….…..Trained in geology, the elder Pumpelly believed that Central Asia in ancient times was wetter and more fertile that it is now. He hypothesized a century ago that "the fundamentals of European civilization—organized village life, agriculture, domestication of animals, weaving, etc.—were originated on the oases of Central Asia long before the time of Babylon." Such assertions sounded radical—even outlandish—at that time, but Raphael Pumpelly was persuasive. An adventurer and son of an upstate New York surveyor, he convinced industrialist Andrew Carnegie to fund his expedition, charmed the authorities in Saint Petersburg into granting permission for a dig in 1903, and was even provided with a private railcar. He was 65 years old when he arrived."….. http://www.freerepublic.com/focus/chat/1730527/replies?c=12

"November 2013…..Archaeology …..Oxus Culture Finds in North Khorasan…..Discovered by the team of Iranian and Italian archaeologists at the Bronze Age site of Chalo…..Traces of an international culture with major similarities to the Oxus civilization, otherwise known as the Bactria–Margiana Archaeological Complex, have been discovered during an archaeological excavation in the prehistoric site of Chalo near the town of Sankhast in North Khorasan Province, Iran…..The excavation has been carried out by a team of Iranian and Italian archaeologists, the Iranian director of the team, Ali-Akbar Vahdati, told the Persian service of CHN on Saturday."…..http://archaeologynewsnetwork.blogspot.com/2013/11/traces-of-bmac-culture-found-in-ne-iran.html

"During the last twenty years a hitherto unknown culture in Central Asia has been uncovered by archaeologists. This civilization of the Bronze Age is called Bactria-Margiana Archaeological Complex (BMAC) and is situated, as the name indicates, in Bactria on both sides of the Amu Darya and in Margiana, the Merv-Oasis. It can roughly be dated to the first quarter of the second millennium BC and has been considered to be a fifth center of Old World civilization (with Mesopotamia, Egypt, India and China). The BMAC had strong connections not only to the Neolithic and Chalcolithic sites of the piedmont region of Southwest Turkmenistan, but also with Mesopotamia and Elam, Syria, Anatolia, Eastern and Northern Iran, Baluchistan, the Indus-Valley and even China."…..…..http://archaeologynewsnetwork.blogspot.com/2013/11/traces-of-bmac-culture-found-in-ne-iran.html

"The ancient Oxus culture may have arisen at sites like Anau, a settlement at the base of the Kopet-Dag mountains, which dates back to 6500 B.C. Later settlements like Gonur, roughly 4,000 years old, may have been founded by people from the Kopet-Dag cultures." http://discovermagazine.com/2006/nov/ancient-towns-excavated-turkmenistan#.Upqk-aVURSU

"...Why the Oxus culture vanished may never be known. But researchers think they have pinned down the origin of these mysterious people. The answers are turning up in traces of mound settlements bordering the rugged Kopet-Dag mountains, which rise up to form the vast Iranian plateau. The most prominent settlement there lies a grueling 225-mile drive from Gonur. At this site, called Anau, three ancient mounds poke up from the plains. Volunteer Lisa Pumpelli is working there in a trench at the top of a large mound with a spectacular view of the Kopet-Dag mountains. She is helping Hiebert, who is now an archaeologist with the National Geographic Society in Washington, D.C., track down the precursors to the Oxus culture. Both are following in the footsteps of Lisa Pumpelli's grandfather, Raphael Pumpelly, and great-grandfather, also named Raphael Pumpelly (Pumpelly is an alternate spelling of the family name). "I'm digging in my great-grandfather's back dirt," Pumpelli quips. …..The mounds at Anau, just off the Trans-Caspian railway, immediately caught Raphael Pumpelly's eye. A Russian general searching for treasure had already cut through the oldest of them, so Pumpelly and his son began there, using methods that were surprisingly modern in an era when most archaeologists were fixated on finding spectacular artifacts. "A close watch was kept to save every object, large and small . . . and to note its relation to its surroundings," Pumpelly wrote in his memoirs. "I insisted that every shovelful contained a story if it could be interpreted." …The close scrutiny paid off. One shovelful yielded material later determined to be ancient wheat, prompting Pumpelly to declare that Central Asian oases were the original source of domesticated grain. Although that claim later proved false—subsequent Near Eastern finds of wheat date back even earlier—it was the first recorded instance of serious paleobotany. "….http://www.freerepublic.com/focus/chat/1730527/replies?c=12 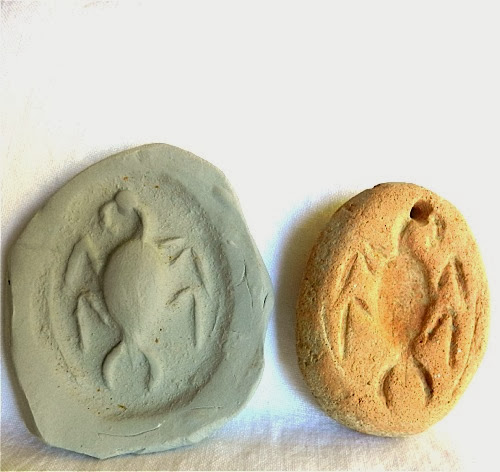 1. Ancient Anau and the oasis-world, by Raphael Pumpelly. Archaeological excavations in Anau and old Merv, by Hubert Schmidt. Note on the occurrence of glazed ware at Afrosiab, and of large jars at Ghiaur Kala, by H. H. Kidder. Description of the Kurgans of the Merv Oasis, by Ellsworth Huntington. Chemical analyses of metallic implements, by F. A. Gooch.

3. Myths of Ancient Bactria and Margiana on its Seals and Amulets (1998). Victor Sarianidi