"…. the Six Yogas of Naropa, a preeminent yogic technology system. The six practices—inner heat, illusory body, clear light, consciousness transference, forceful projection, and bardo yoga—gradually came to pervade thousands of monasteries, nunneries, and hermitages throughout Central Asia over the past five and a half centuries."…..The Six Yogas Of Naropa: Tsongkhapa's Commentary Entitled A Book Of Three Inspirations: A Treatise On The Stages Of Training In The Profound Path Of Naro's Six Dharmas Paperback by Tsong-Kha-Pa (Author) , Glenn C. Mullin (Translator) 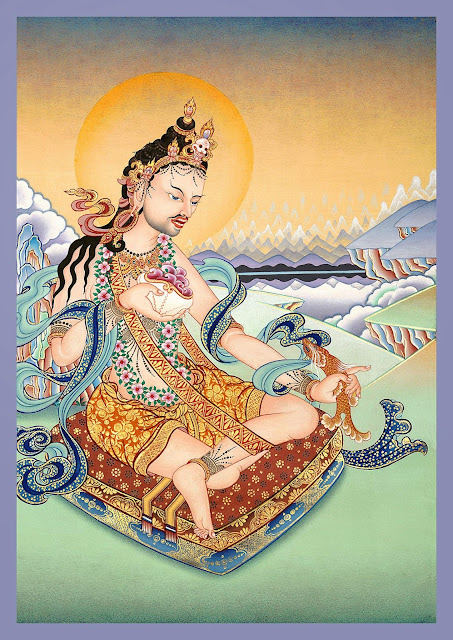 "This year, Lopon and Tenzin Wangyal Rinpoche will teach from the Bön Three Root Mother Tantras known as the Ma-rgyud Sangs-rgyas rGyud gSum (pr. Magyu Sangye Gyu Sum), the Three Buddhahood Tantras, using the commentary by Mi-lus bSam-legs ( Milu Samlek), the Prince of the region of Tazig around the 7th or 8th century….Hidden in the 8th century, these texts were rediscovered in the 10th century by Guru rNon-rtse [Guru Nontse]. These Tantras have an emphasis on practices of the Completion Stage, rDzogs-rim" ….and have six main practices, which can be said to be somewhat similar to the Six Yogas of Naropa. In the case of the Bön Mother Tantras, the six are: 1. The expedient use of Means (mainly devoted to breath control)
2. The expedient use of Dreams
3. The expedient use of Fear (the prac- tice of “cutting,” gCod , pr. chöd)
4. The expedient use of Projection (the practice of Transference, “Pho-ba” pr. phowa)
5. The expedient use of Death (teachings on the Intermediate State, “Bar-do”)
6. The expedient use of Sleep.
The retreat will take place at the Bodhi Manda Zen Center in Jemez Springs, New Mexico. It will be from the July 1 to 21, 1996.……http://www.cstone.net/~ligmin/VOCL/spring96.pdf

"The Six Yogas of Nāropa (Tib. Narö chö druk, na-ro'i-chos-drug), also called the six dharmas of Naropa…..Wisdom Activities Path Six Methods of Accomplishment), are a set of advanced Indo-Tibetan Buddhist tantric practices and a meditation sādhana compiled in and around the time of the Indian monk and mystic Nāropa (1016-1100 CE) and conveyed to his student Marpa the translator."… Evans-Wentz in Tibetan Yoga and Secret Doctrines (1935)…..
tummo (T: གཏུམ་མོ་ gtum-mo, S: caṇḍālī) — the yoga of inner heat (or mystic heat).…..
gyulü (T: སྒྱུ་ལུས sgyu-lus, S: māyākāyā) — the yoga of the illusory body.…..
ösel (T: འོད་གསལ་ 'od-gsal, S: prabhāsvara) — the yoga of the clear light or radiant light.[…..
milam (T: རྨི་ལམ་ rmi-lam, S: svapnadarśana) — the yoga of the dream state.…..
bardo (T: བར་དོ bar-do, S: antarābhava) — the yoga of the intermediate state. This is well-known through the Bardo Thödöl. Bardo yoga as the yoga of liminality may include aspects of gyulu and milam and is therefore to be engaged as an extension of these disciplines.…..
phowa (T: འཕོ་བ་ 'pho-ba, S: saṃkrānti) — the yoga of the transference of consciousness to a pure Buddhafield.…..
… The Six Yogas of Naropa: Tsongkhapa's Commentary by Glenn H. Mullin (Editor, Translator) Snow Lion Publications: 2005.

"Naropa, known as Abhayakirti (‘jig med grags pa) Jnanasiddhi, was born in Kashmir into the Brahmin caste, according to Taranatha and other sources, who say that he was born in a place called Jambu (Shrinagar, according to Guenther) in eastern part of India. His father was Shantivarman and mother, Shrimati….. 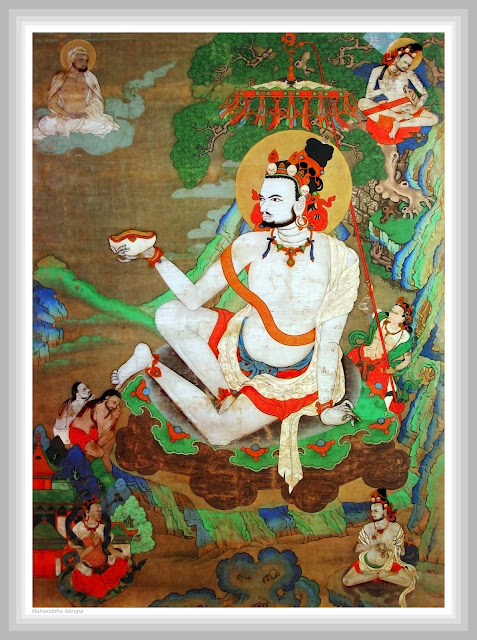 Guru Nontse…"Under king Trisong Detsen (Khri srong Ide btsan, 790-848 C.E.) the Bonpos suffered a second persecution, and it was not until the twelfth century that the Secret revelation of the Mother Tantras were rediscovered by Guru Nontse (Gu ru rnon rise) in the rock of Dungpor (Dung phor bkra shis) near the village of Tanag (rTa nag) in the central province of Tsang, "[h]ence this collection of Terma became known by the name of the Dung phor ma." Guru Nontse then gave this collection of teachings to Zhonu (gZhon nu). But the Secret Mother Tantra Cycle was not the only Mother Tantra Cycle……there are three cycles of Mother Tantras: Outer, Inner, and Secret. For each, there is a root text or texts with a body of exegetical and liturgical works subordinate to the root text. " Milu Samlek wrote separate commentaries for each of the three cycles….Guru Nontse, who was the rediscoverer of the Secret Mother Tantra, "may be identified as an incarnation of one of the members of the earlier lineage." The lineage, as Martin says, is more than the mere passing down the oral tradition, but is also the "transference of the 'charisma' (byin brlabs) [or blessings] of the institutor of the lineage." This acknowledges not only an intimate connection among the lineage-holders, but also opens a window into an understanding beyond the purely historical. Guru Nontse "was known in the Buddhist histories as Aya Bonpo Lhabun (A ya bon po lha 'bum), for he discovered many Nyingma Termas as well as Bonpo ones." The Secret Mother Tantra text, like many of such discoveries, was discovered by "accident." Guru Nontse, who was a hunter and a potter, had hunted an antelope in the mountain, and was chopping its bones on a rock when suddenly the rock broke apart. To his amazement inside the rock he found a white silk cloth written on both sides and wrapped on a stick. The story goes that Zhonu, who was from Kham (East Tibet), had a dream where the skygoers prophesied that he was to receive an important text. Some time later, he was in fact handed the Secret Mother Tantra silk cloth directly from Guru Nontse. He told Zhonu that he had already transcribed many texts, and "since you have transferred from a divine status, your thoughts are pure and you are very quiet and relaxed. So copy the texts without anyone seeing them." Then Zhonu went to Kham and copied the texts, but some time later Guru Nontse appeared unexpectedly and asked for the silk cloth, alleging that the skygoers wanted the cloth to be returned. Asking Zhonu, "Did you see the five loose open-mouthed tigresses pass by at Dung phor?," Guru Nontse took the roll back."….THE MOTHER TANTRAS…..by Marco Alejandro Chaoul....http://www.surajamrita.com/bon/MotherTantra.html

" J.Reynolds, "The Threefold Practice of the Primordial State of the Mother Tantra/' p. 7. Martin adds that there is another chronology which "actually dates Lha "bum before the first rab-'byung (beginning in 1027 A.D. [C.E.]), but according to Kvaeme (in 'Chronological' no. 97), he was born in 1136 A.D." (D. Martin, Mandala Cosmogony, p. 27, lack of hyphenation is mine). The latter is also the date found in the English Preface to the 1985 edition or the Secret Mother Tantra text; while the one of the 1971 edition places Guru Nontse in some unsperific time after the texts' burial in the eighth century."…..http://vajrayana.faithweb.com/ACollectionOfStudiesOnBon.pdf

"Lopon Tenzin Namdak, personal communication, Houston, June 1996 and reiterated in Kathmandu, June 1997. It is interesting to note that many of the Bon treasures were discovered in this accidental manner, after they were hidden because of the persecutions. This differs from the Buddhist tradition were the treasures where discovered by people who were considered reincarnations of disciples of Guru Rinpoche, who had hidden those teachings because the people were not ready for them. While the Bon discoverers (gter ston) were usually ordinary, and often illiterate people, the Buddhist discoverers were considered great masters that brought forth those teachings because it was the time when people were ripe for them. In that sense the Buddhist discoveries were predetermined, i.e., who was going to discover what text, and when, were foretold by Guru Rinpoche or other great masters or deities (especially skygoers). The Bon tradition claims that many of its treasure discoveries were not predetermined but accidental—sometimes even robbers would be the discoverers. However, they too have some treasures that were discovered by great masters or people like Guru Nontse, who may be "charismatically" related to the institutors of the lineage. The topic of discovered treasures is very interesting, and the accidental (or seemingly accidental) vs. predetermined models might bring forth some further information about the similarities and differences between Bon and Buddhism."….http://vajrayana.faithweb.com/ACollectionOfStudiesOnBon.pdf

The Six Yogas Of Naropa: Tsongkhapa's Commentary Entitled A Book Of Three Inspirations: A Treatise On The Stages Of Training In The Profound Path Of Naro's Six Dharmas Paperback…….by Tsong-Kha-Pa (Author) , Glenn C. Mullin (Translator)