"Lopon Tenzin Namdak told me that Meditation Commentary: Mandala of the Sun includes the Commentary of Base and Path. He is not sure about the Commentary of the Fruit since it does not exist (Lopon Tenzin Namdak, telephone conversation, August 1998). Martin made clear to me that: "when I say "Meditation Commentary" in this context, I mean nothing more than the historical preface …. (D. Martin, electronic correspondences, November 1998). But as seen in ft. 136, Martin affirms that the title 'properly' encompasses "a much larger collection of texts than just the preface."…….Lopon Tenzin Namdak, personal communication, Kathmandu, June 1997. Also see J. Reynolds, "The Mandala of the Sun," p. 34. Here the idea of people not being yet ripe to hear the teachings is seen within the Bon context. This could be linked with the study of treasure discoveries in both traditions, as suggested in an earlier footnote. Reynolds adds that there was one other yogi by the name of Bucni (Bu ci) that Guru Nontse considered ready for this teaching (J. Reynolds, "The Mandala of the Sun," p. 34)….http://vajrayana.faithweb.com/ACollectionOfStudiesOnBon.pdf

" The Secret Mother Tantra text, like many of such discoveries, was discovered by "accident."….Guru Nontse, who was a hunter and a potter, had hunted an antelope in the mountain, and was chopping its bones on a rock when suddenly the rock broke apart. To his amazement inside the rock he found a white silk cloth written on both sides and wrapped on a stick. The story goes that Zhonu, who was from Kham (East Tibet), had a dream where the skygoers prophesied that he was to receive an important text. Some time later, he was in fact handed the Secret Mother Tantra silk cloth directly from Guru Nontse. He told Zhonu that he had already transcribed many texts, and "since you have transferred from a divine status, your thoughts are pure and you are very quiet and relaxed. So copy the texts without anyone seeing them." Then Zhonu went to Kham and copied the texts, but some time later Guru Nontse appeared unexpectedly and asked for the silk cloth, alleging that the skygoers wanted the cloth to be returned….The silk cloth was never found again, consequently the Meditation Commentary: Mandala of the Sun is the only extant commentary."
"All versions coincide in that the silk roll which Guru Nontse gave to Zhonu contained the three Root Tantras together with the three sets of Commentaries: the Meaning Commentary: Solar Essence (don 'grel nyi ma 'i snying po), which is the abridged commentary; the Meditation Commentary: Mandala of the Sun (sgom 'grel nyi ma'i dkyil 'khor), which is the intermediate length commentary; and the Explanation Commentary: Solar Rays.(bshad 'grel nyi ma'i 'od zer), which is the extended commentary, containing word by word explanation of the three root texts of the Secret Mother Tantra. Martin agrees with Karmay in thinking that even when it is stated that Milu Samlek composed all three commentaries, it is not very dear which one we are dealing with. The commentary in hand, the Secret Mother Tantra: Root Commentary of the Three Buddhahood Tantras (ma rgyud sangs rgyas rgyud gsum rtsa 'grel)] states at the beginning (p. 207) that it is the Meditation Commentary: The Solar Essence, but on p. 208 it indicates that it is the Meditation Commentary: The Mandala of the Sun."………….http://vajrayana.faithweb.com/ACollectionOfStudiesOnBon.pdf…..(Page 51)

"According to the Secret Mother Tantra texts, Milu Samlek then composed three commentaries in order to elucidate their meaning, and transmitted the teachings to his disciple Mushen Namkha Nangwa Dogchen (dMu gshen nam mkha' snang ba'i mdog can). The latter, after practicing on the slopes of Mount Kailash, bestowed the initiation and instructions to the Bon pandit Anu Tragtak (A nu 'phrag thag)f who in turn handed this teachings down to Sene Gau (Sad na ga'u) of Zhang Zhung. Sene Gau translated the teachings from Zhang zhung to Tibetan. It was during his time that the first persecution of Bon teachings and practitioners took place, under the reign of the Tibetan Buddhist king Drigum Tsenpo (Gri gum btsan po, ca. 683 B.C.E.), and therefore, "the custodianship of these texts of the ma rgyud was delivered by Sad ne ga'u into the hands of the six Dakinis of the Path, the Jarama (bya ra ma) or watchers,"….. "who served as the 'treasure protectors'."…….http://vajrayana.faithweb.com/ACollectionOfStudiesOnBon.pdf…(Page 50)

The Ma Gyud teachings in 2012 are the second in a series that started in May 2011. After Geshe Gelek Jinpa and Lama Sangye Monlam had taught Tummo in Graz for a week in 2009, they agreed to come again and offered to give a series of Ma Gyud teachings, one week every year for five years starting in 2011. Three days before the scheduled begin in May 2011, Geshe Gelek was called off to a different job for the benefit of his monastery, and Lama Sangye Monlam graciously agreed to teach alone the full program that Geshe Gelek and he had planned."…http://yungdrung-bon.com/Lama_Sangye/

In 2011, Lama Sangye taught the Ma Gyud chapters "thar lam", the way of liberation, and "sgom 'brel nyi ma'i dkyil 'khor", the meditation according to the mandala of the sun. He taught us to recite the short and intermediate Ma Gyud sadhana, and read to us the biography of Milu Samleg, the author of the Ma Gyud….In 2007, after four years of Drenpa Sangdrub retreat, Lama Sangye was sent by Yongdzin Tenzin Namdak Rinpoche to Shenten Dargye Ling in France, where he is still living as a resident Lama."…..http://yungdrung-bon.com/Lama_Sangye/ 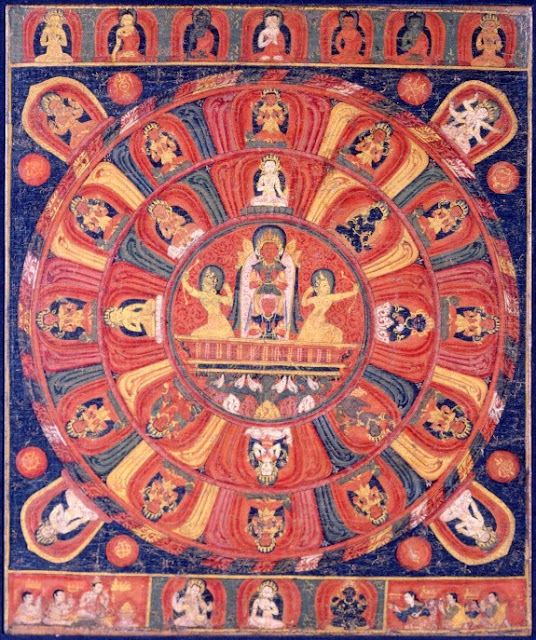 Mandala of The Sun God…The Walters Art Museum……"The sun god, who is both Hindu and Buddhist, appears at the center, flanked by Dawn and Pre-Dawn; the next circle holds the planets; and the outer circle has the twelve forms of the sun. Across the top, two bodhisattvas flank the five cosmic Buddhas. On the bottom, at the left, the priest presents offerings to a fire; on the right are the patron and his family. Nepalese Buddhists carried out ceremonies intended to prevent evil influences from disturbing the sun and the moon. The sun may also be an object of meditation, paired with the moon and imagined inside one's body."……http://art.thewalters.org/detail/24952/mandala-of-the-sun-god/

Practice of the three States of Magyu…..December 2013…….Guided by Lama Sangye and/or Geshe Samten.........http://shenten.org/en/shenten-schedule/207-practice-of-the-three-states-of-magyu

J. Reynolds, "The Threefold Practice of the Primordial State of the Mother Tantra,"