"Indo-Iranian peoples are a grouping of ethnic groups consisting of the Indo-Aryan, Iranian, Dardic and Nuristani peoples; that is, speakers of Indo-Iranian languages, a major branch of the Indo-European language family….The Proto-Indo-Iranians are commonly identified with the descendants of the Proto-Indo-Europeans known as the Sintashta culture and the subsequent Andronovo culture within the broader Andronovo horizon, and their homeland with an area of the Eurasian steppe that borders the Ural River on the west, the Tian Shan on the east…..The term Aryan has generally been used historically to denote the Indo-Iranians because Arya is the self designation of the Indo-Iranian languages and their speakers, specifically the Iranian and the Indo-Aryan peoples, collectively known as the Indo-Iranians…..Some scholars now use the term Indo-Iranian to refer to this group, while the term "Aryan" is used to mean "Indo-Iranian" by other scholars such as Josef Wiesehofer and Jaakko Häkkinen…..Population geneticist Luigi Luca Cavalli-Sforza, in his 1994 book The History and Geography of Human Genes, also uses the term Aryan to describe the Indo-Iranians."…..http://en.wikipedia.org/wiki/Indo-Iranians

"…..the debate about Aryan origins. Until recently, publications by Indo-Europeanists and Indigenous Aryanists have continued on with very little conversation between the opponents, and great opportunity for creating straw men on both sides…..several elements: agreeing upon rules of evidence and abiding by those rules; allowing a hypothesis to remain exactly that, and not become an automatic claim; allowing a challenge to be answered, and not simply be taken for an automatic demolishing of a theory. "…..The Indo-Aryan Controversy: Evidence and Inference in Indian History….ed. Edwin Bryant, Laurie Patton (2005) 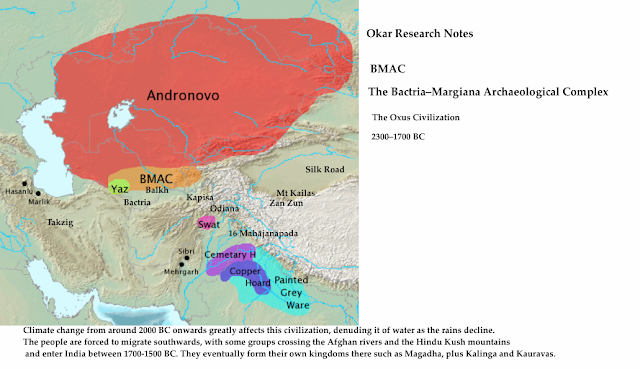 "The early Iranians are commonly identified with the descendants of the Proto-Indo-Europeans known as the Sintashta culture and the subsequent Andronovo culture within the broader Andronovo horizon, and their homeland with an area of the Eurasian steppe that borders the Ural River on the west, the Tian Shan on the east. Historical linguists broadly estimate that a continuum of Indo-Iranian languages probably began to diverge by 2000 BC, if not earlier,:38–39 preceding both the Vedic and Iranian cultures. The earliest recorded forms of these languages, Vedic Sanskrit and Gathic Avestan, are remarkably similar, descended from the common Proto–Indo-Iranian language. The origin and earliest relationship between the Nuristani languages and that of the Iranian and Indo-Aryan groups is complex."….http://en.wikipedia.org/wiki/Indo-Iranians 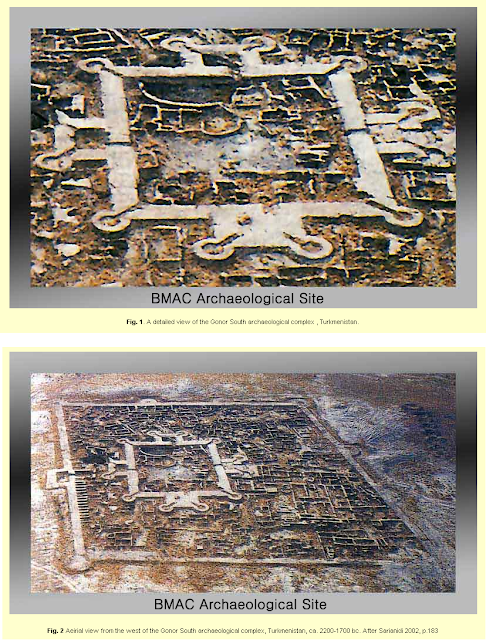 "The Bactria–Margiana Archaeological Complex (or BMAC, also known as the Oxus civilization) is the modern archaeological designation for a Bronze Age civilisation of Central Asia, dated to ca. 2300–1700 BCE, located in present day northern Afghanistan, eastern Turkmenistan, southern Uzbekistan and western Tajikistan, centered on the upper Amu Darya (Oxus River). Its sites were discovered and named by the Soviet archaeologist Viktor Sarianidi (1976). Bactria was the Greek name for the area of Bactra (modern Balkh), in what is now northern Afghanistan, and Margiana was the Greek name for the Persian satrapy of Margu, the capital of which was Merv, in modern-day southeastern Turkmenistan"…..http://en.wikipedia.org/wiki/Bactria–Margiana_Archaeological_Complex

“Archaeology and Linguistics,” begins with Asko Parpola and Christian Carpelan’s chapter “The Cultural Counterparts to Proto-Indo-European, Proto-Yralic and Proto-Aryan.” Their contribution is to sketch out a scenario in which the archaeological data matches the cultural and linguistic data in the hypothe- ses of Indo-European expansion. They argue first through etymological data, and then through archaeological discussion, that Indo-European and Uralic proto- languages were both spoken in the archaeological cultures of Eastern Europe. Building on the work of David Anthony (1995, 1998), they also attempt to correlate Indo-European and Uralic linguistic groups with archaeological cultures. …The parent language that gave birth to proto-Indo-European was the Khvalynsk culture in the mid-Volga region (5000–4500 BCE). According to their scenario, the Khvalynsk culture spread east and west, intersecting with Uralic speaking peoples (8500 BCE)…..The Indo-Aryan Controversy: Evidence and Inference in Indian History…..ed. Edwin Bryant, Laurie Patton (2005)(Page 5)

"Parpola’s and Carpelan’s new hypothesis of the split between Indo-Aryans and Indo-Iranians. According to their scenario, Eastern Pit Grave cultures (2200–1800 BCE) thrived in the southern Urals and developed horse-drawn chariots; this was called the Sintashta-Arkaim culture and was made up of two dialects: Poltavka in the west (pre-proto-Iranian) and Abashevo (pre-proto- Indo-Aryan) in the east. The split where these two dialects became more marked and distinct from each other must have occurred in 1800 BCE. At this time the Ural River became the border between them. Moving westward, the Indo-Iranian speaking groups developed their characteristic ‘h’ change from Indo-European ‘s’ words. The Indo-Iranian speaking group was called the Timber Grave culture, and was able to expand into central Asia through the use of horses. The proto-Indo-Aryan speakers were the rulers of the Mitanni Kingdom – famous for its seals which name the five Indo-European deities. According to Parpola and Carpelan, they in all likelihood came to Syria from southern central Asia and northern Iran. A recent find in Tajikistan shows an aristocratic warrior with accouterments that are clearly Sintashta-Arkaim in nature (Bobomulloev 1999). Thus, this hypothesis would bring the Sintashta-Arkaim culture to the borders of South Asia in which the horse-drawn chariot played a central role in the Vedic-Aryans’ movements and cultures."…The Indo-Aryan Controversy: Evidence and Inference in Indian History….ed. Edwin Bryant, Laurie Patton (2005)

"C. C. Lamberg-Karlovsky’s chapter, “Archaeology and Language: The Case of the Bronze Age Indo-Europeans,” also addresses the theories of the last few decades about Androvono (which Parpola and Carpelan call the Sintashta-Arkaim) culture, as well as the Bactrian Margiana Archaeological Complex (BMAC). He is particularly concerned with the possibility of either culture being identified as positively Indo-Iranian speaking….The BMAC culture, excavated by the Soviets in the last two decades in Afghanistan, however, is a slightly different story. Houses and forts, temples and palaces contain parallels in Iran as well as other parts of South Asia, and BMAC seems to be basically contemporaneous with Androvono culture. Archaeologists generally agree that the question of contact between BMAC and Androvono is paramount, and many argue that such contact was possible and proveable, even if the nature of the contact (trade, domination, warfare) is impossible to determine. What is more, the use of ephedra as a kind of mild intoxicant (homa/soma), the presence of animal sacrifice and fire altars have inspired scholars to argue for an Indo-Iranian and proto-Zoroastrian identity of the BMAC.."….The Indo-Aryan Controversy: Evidence and Inference in Indian History….ed. Edwin Bryant, Laurie Patton (2005) (Page 6)

"….the most likely archaeological candi- dates to be identified as “Indo-Iranian” culture – the Androvono and the BMAC cultures. Even the most likely connecting link, the BMAC culture, could have still sponsored several different spoken languages within its impressive fortifications and temples….those who argue for the origin of Aryan civilization within India and those who argue for an origin outside of India do not share the same paradigms for linguistic derivation. Archaeological discoveries in other, related areas, such as Iran and Russia, also seem to suggest a connection between these cultures. ."…….The Indo-Aryan Controversy: Evidence and Inference in Indian History….ed. Edwin Bryant, Laurie Patton (2005) (Page 16)

"A major contender for Indo-Iranian identity, and a relatively new actor on the archaeological stage of Central Asia, is a cultural complexity of great signifi- cance. The BMAC was discovered and named by Victor Sarianidi (1976: 71) fol- lowing his excavations in Afghanistan in the late 1970s (for a bibliography of significant BMAC publications see Klochkov 1999). Bactria was the name given by the Greeks to the regions of northern Afghanistan,the territory around the Amu Darya River, while Margiana (Margush) was a Persian province of the Achaemenid empire, whose capital was Merv, in present-day Turkmenistan. Victor Sarianidi (1998a,b) in two important volumes not only has identified the BMAC as Indo-Iranian but isolated, within the archaeological record, what he believes to be distinctive Proto-Zoroastrian cultural characteristics." …….The Indo-Aryan Controversy: Evidence and Inference in Indian History….ed. Edwin Bryant, Laurie Patton (2005) (Page 158)

"Sarianidi concludes that the BMAC are Indo- Aryan and the Andronovo are Iranian. Both are proto-Zoroastrian sharing common cultic rituals….. in his recent book Sarianidi (1999) accepts, albeit uneasily, the higher chronology for the BMAC, already advanced in the mid-1980s by a number of scholars. A series of radiocarbon dates, collected by Fredrik Hiebert (1994) at Gonur on behalf of the Peabody Museum, Harvard University, offers unequivocal evidence for the dating of the BMAC to the last century of the third millennium and the first quarter of the second millennium. A new series of radiocarbon dates from Tepe Yahya IVB-4, where BMAC imports were recovered, confirms the late third millennium dating for the beginnings of the BMAC (Lamberg-Karlovsky 2001). The BMAC, rather than dating to the second half of the second millennium, is to be dated to the end of the third and beginning of the second millennium. Sarianidi (1999: 78) now writes “that the first colonists from the west appeared in Bactria and Margiana at the transition of the III-II Millennia B.C.” (p. 78)…."……….The Indo-Aryan Controversy: Evidence and Inference in Indian History….ed. Edwin Bryant, Laurie Patton (2005) (Page 163)

"….. there is no unequivocal evidence, either on the steppes or in Central Asia, for human sacrifice."….….The Indo-Aryan Controversy: Evidence and Inference in Indian History….ed. Edwin Bryant, Laurie Patton (2005) (Page 163)

"….There is scant evidence to support the notion of an extensive migration from Syro-Anatolia to Bactria-Margiana at any point in the archaeological record!."….….The Indo-Aryan Controversy: Evidence and Inference in Indian History….ed. Edwin Bryant, Laurie Patton (2005) (Page 163) 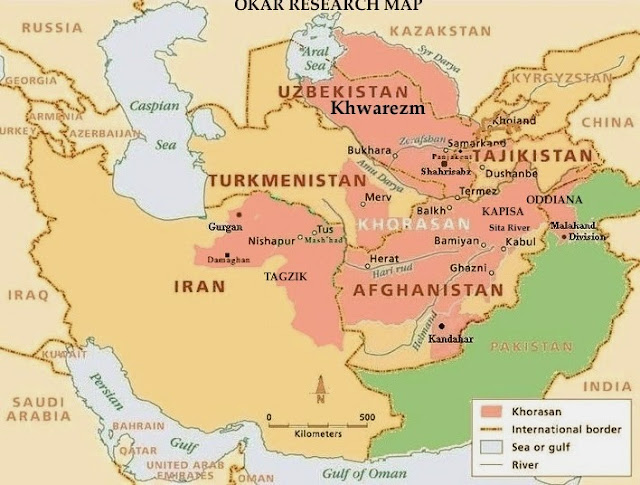