"Dream Yoga or Milam (T:rmi-lam or nyilam; S:svapnadarśana) — the Yoga of the Dream State are a suite of advanced tantric sadhana of the entwined Mantrayana lineages of Dzogchen (Nyingmapa, Ngagpa, Mahasiddha, Kagyu and Bönpo). Dream Yoga are tantric processes and techniques within the trance Bardos of Dream and Sleep (Tibetan: mi-lam bardo) and are advanced practices similar to Yoga Nidra. Aspects of Dream Yoga sadhana are subsumed within the practice suite of the Six Yogas of Naropa. In the tradition of the tantra, Dream Yoga method is usually passed on by a qualified teacher to his/her students after necessary initiation. Various Tibetan lamas are unanimous that it is more of a passing of an enlightened experience rather than any textual information."….http://en.wikipedia.org/wiki/Dream_yoga 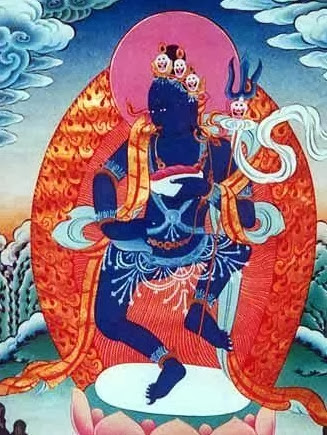 "Tenzin Wangyal Rinpoche's teachings on dream yoga are from the Mother Tantra (Ma Gyud), one of the most important cycles of teachings in the Bon Buddhist tradition of Tibet. During his retreats Rinpoche typically discusses the relationships between dreaming and waking and between dreaming and death. He also instructs in the “four preparations” for sleep and the uses and methods of lucid dreaming."…http://www.ligmincha.org/en/programs/overviews-of-teaching-topics.html

"Yoga nidra or "yogi sleep" is a sleep-like state which yogis report to experience during their meditations. Yoga nidra, lucid sleeping is among the deepest possible states of relaxation while still maintaining full consciousness… Lucid dreaming is the Western term used to denote a practice similar to yoga nidra. …yoga nidra is very ancient in Indian traditions such as Hinduism and Buddhism. Krishna is often associated with yoga nidra in the epic Mahabharata…..

" From Caryapa, Tilopa (988 - 1069 CE) of the Dzogchen Kham lineage, "received the oral instructions on Dream yoga according to the method of the Mahamaya-tantra…..Mahāmāyā-tantra is a tantric text concerning Mahāmāyā. Mahāmāyā (Mahā holds the semantic field: "total", "great"; Māyā holds the semantic field: "magic", "phantasmagoria", "illusion", "dream") is a deva or deity in Indian religions. Mahāmāyā, Māyā or Maya, is also a force and/or the principal deity who creates, perpetuates and governs the phantasmagoria, illusion and dream of duality in the phenomenal Universe. Stated simply, Maya is the goddess of dreams. Mahāmāyā is also the name of Shakyamuni Buddha's mother."….http://en.wikipedia.org/wiki/Mahamaya-tantra

"The point of origin of the Shangpa Kagyu lineage was the Mahasiddha Khyungpo Naljor of Shang, in west-central Tibet…. The Mahamaya-tantra does indeed contain spells for flying, taking a bird's shape and travelling to any place on Earth. It also promises the ability to espy holes in the ground, perhaps marking spots where other, less talented sky-striders came to grief…..

"According to contemporary Dzogchen teachers Namkhai Norbu, Lopön Tenzin Namdak and Tenzin Wangyal, the perceived reality and the phenomenal world are considered to be ultimately "unreal" — an "illusion" (refer Mahamaya): a dream, a phantasmagoria, a thoughtform. All appearances and phenomena are a dream or thoughtform, inter- and intra- reflecting and refracting jewels and mirrors of possibility and potentiality, "arising in relationships" or "dependent co-arising". It is held by these lineages and due to the realisations of the sadhana, that the dream of life and regular nightly dreams are not dissimilar, and that in their quintessential nature are non-dual. The non-essential difference between the general dreaming state and the general waking experience is that the latter is generally more concrete and linked with attachments, samskara and skandha; whereas, standard non-lucid dreaming is ephemeral and transient, and generally culturally reinforced as baseless and empty. In Dream Yoga, living may become the dream, and the dream may become the living. Progressing the sadhana may be metaphorically likened to living the scientific hypothesis of a resolved superposition. The resolved superposition being a mindstream conflation of Dharmakaya with Shunyata and Indra's Net. The entwined Mantrayana lineages of Nyingmapa, Bonpo, Ngagpa and Mahasiddha are saturated with trance and dream transmissions of teachings, doctrine, etcetera that transcend constructs of time, place and space, these are often called "whispered traditions" and terma."….

"On many occasions Prophet Muhammad, upon him be peace, after finishing the morning prayer in the mosque, he would face the companions and ask, "Who amongst you had a dream last night?" So if anyone had seen a dream he /she would narrate it. The Prophet would say: "Ma sha'a-llah" (God has willed it) and he would continue interpreting the dream…..Thus dream interpretation, specially in group was practiced from the very time of the Prophet, which tradition is also carried and practiced in many sufi orders and has distinguished place in Islamic wisdom tradition….Prophet Muhammad is reported to have said, "Nothing is left of Prophethood except glad tidings." Those with him asked, "What are glad tidings?" He replied, "True dreams / visions."…..The Prophet Muhammad mentioned that after he was gone prophecy would come only through true dreams. Based on this and other statements, early Muslims created what might be called a theology of dreams. Dreams were regarded as an important means used by God to guide the faithful, especially after the cessation of Quranic revelation."…..

"…Crazy Horse ….(Lakota Chief: Tȟašúŋke Witkó…c.1840 – September 5, 1877) was a Native American war leader of the Oglala Lakota…..Crazy Horse stayed on the mountain by himself for three days and nights. He did not eat or drink. He prayed that the Great Spirit would send him a dream to show him how to live….Crazy Horse dreamed. He entered the world of truth and of the spirits of all things. The Lakota people called this "the real world". They believed our world was only an image of the real world…..In his dream, Crazy Horse saw a man riding a horse through clouds of darkness and battle. Bullets flew around him, but did not hit him…..The man wore a stone under one ear, and a bird feather in his hair. His body was painted with sharp white lines, like lightning. A light followed him, but it was sometimes covered by darkness…..Crazy Horse understood the dream as a sign. He knew his people were entering a time of darkness. He dressed himself like the man in the dream, so that no bullets would hurt him. He would try to save his land for his people. He would try to protect their way of living."….http://www.manythings.org/voa/people/Crazy_Horse.html

"Dream Yoga and the Practice of Natural Light by Namkhai Norbu. Systems for dreamwork and dream awareness have been found for millennia within Buddhism, Taoism, Hinduism, Sufism, and traditional cultures throughout the world. These dreamwork systems were and are often still cloaked in secrecy and reserved for the initiate"…..