"…According to the Mdo ’dus, Shenrab’s father, named Rgyal bon thod dkar, was the son of Dmu King Lan kyis thems pa skas and Queen Ngang ’brang ma.....(On the other hand, the ’Dul ba gling grags and Rtsa rgyud nyi sgron record the name of Rgyal bon thod dkar’s mother as Lha za ’phrul mo. Shar rdza (1985: 16) gives us yet another similar name, Ngang grags ma, who was the lady (consort) of Srid rje ’brang dkar, an ancestral member of dmu lineage, and was also called lha za, “a divine princess.”)….. His mother, the queen, was a daughter of A lde khyab pa of the Phya family. This indicates that Shenrab was a grandson of Dmu and Phya, which are recognized as two important clans in old Tibetan historical sources."…. 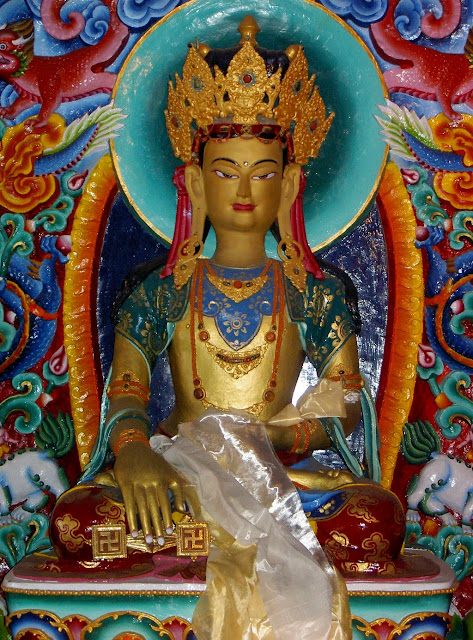 Kalsang Gurung: Shenrab’s Ancestors and Family Members: Where do they come from?

"…. the life account of the founder of Bon, Shenrab Miwo (Gshen rab mi bo), which was written by Bonpos in the beginning of the last millennium. In the process of writing the life account of Shenrab Miwo in the Mdo ’dus,…..The Mdo ’dus is a shorter and older account compared to the other accounts: the Gzer mig, a mid-length account and the Gzi brjid, a long account."…

"……A dialogue between the ruler of Dmu and an envoy of Phywa (alternatively phya) is also described in Pelliot tibétain 126 (lines 104-68, see Imaeda 2007: 22-24). In this text, a man from the Phywa is asking a man from the Dmu to rule the land of the black-headed men, which latter generally refers to Tibetans (for a detailed discussion, see Karmay 1998: 178-180, note 31). This Dmu and Phya family relationship is also maintained in the Mdo ’dus."

"Among the old Tibetan sources, I will first look at some Tibetan documents preserved in Dunhuang caves. Those documents were only accessible until the early 11th century due to the closure of the caves either in 1002 AD15 or in 1035 AD.16 The documents became available again after their discovery in the beginning of the twen- tieth century."

… " rgyal t(h)ag as “a protection cord belonging to rgyal spirit,” as rgyal is, alternatively, one of the eight classes of gods and demons"

"…The middle daughter, Dre btsun dmu mo, consorted with Mi bon lha bon and Rgya ’brong tam chen po. From [each] union, they had two sons. The first is a grandson of Dmu King, ’Chi med gshen, and the second is a grandson of White Phya called Ce’u gshen."

"…… ’Chi med gtsug phud (the name used for Shenrab before his descent, according to the Mdo ’dus), and gshen with Gshen rab mi bo (i.e. Shenrab Miwo). As indicated in the last part of the name, the person is said to have been a grandson of the Dmu King (Tib. dmu rgyal tsha). The only person whom this description could be refer- ring to is Shenrab, because he is not only described as we have seen earlier as a grandson of the Dmu King and a son of Rgyal bon thod dkar, but he is also connected to the name ’Chi med gshen (’Chi med gtsug phud plus Gshen rab mi bo)."

"…the author(s) of the Mdo ’dus to assert that Rgyal bon thod dkar was the father, Shenrab Miwo the son, and that their family descended from the Dmu clan."

"…There are two different references to thod dkar found in the Dunhuang documents. The first is pho gshen thod dkar found in Pelliot tibétain 128527 and IOL TIB J 734.28 It refers to male ritual priests wearing white turbans. There was a group of a hundred such priests who were invited from the White Pure Mountain (Tib. dags ri dkar po) to cure someone’s illness. This reference always appears before a reference to “female priests” (Tib. mo gshen), who were also invited from the Black Shadowy Mountain (Tib. sribs ri nag mo) to cure illness.29 We can see from this reference that thod dkar is an epi- thet for a group of male ritual priests (Tib. pho gshen) who were pro- bably wearing white turbans (Tib. la thod). "

"…..a person by the name of Lha bon thod gar, a part of the name of Shenrab’s father. According to the text, Dung myi lha gar invited Lha bon thod gar to defeat his enemy, a demon named Lan pa skyin reng. Dung myi lha gar is described as a primordial god and is also called lha chen (great god). Since all of the relevant events take place in a heavenly land called Lha yul gung thang,39 Lha bon thod gar must also be identified as a divine figure. That is probably the reason why the name Rgyal bon thod dkar was also attached to lha bon (divine bon) to construe the name of Shenrab’s father, Mi bon lha bon rgyal bon thod dkar."

"….early Tibetan texts probably influenced the under- standing of the social order among Bonpos. However, the author(s) of the Mdo ’dus describes the origin of the four castes differently from how we know it from Indian texts and Tibetan translations. In the following passage from the Mdo ’dus, the four castes are said to have originated from the four elements: earth, water, fire and wind…..The n!gas were miraculously born from the four elements: earth, water, fire and wind. The royal caste born from the earth, the merchant caste from water, the Brahmin caste from fire, and the commoner from wind….We may understand that this interpretation of the four castes also applies to the human realm, "

"….Shenrab’s grandfather, the king of Dmu named Lan kyis thems pa skas, and the second is his father, Rgyal bon thod dkar. Let me paraphrase here the relevant passage. There was a king of Dmu, named Lam gyi thems pa skas, in the Bar po so brgyad palace, in the land of ’Ol mo gling in Jambudvipa. He consorted with the Phya Princess Ngang ’brang ma, a grand-daughter of Ma btsun ’phrul mo. Their son was Rgyal bon thod dkar, who mar- ried Rgyal bzhad ma with whom he had nine sons and one daugh- ter. The youngest of them was Shenrab, who became the ruler of the kingdom."

"…The ’Dul ba gling grags has three extra names in the list of Shenrab’s ancestors: 'From the heart of Gshen lha [’od dkar], a brown-reddish light arose and landed on the peak of the brown Dmu mountain. That [light] transformed into a human, who possessed a white light. He was called Dmu phyug skyir mzhon. His union with Lha za gangs grags60 bore a son named Dmu btsan bzher gyi rgyal po. [The latter] consorted with a Phya lady called Rgyal mo and they had a son named Dmu btsan rgyal po. [The latter] and [his wife] Rim nam rgyal mo son was Dmu King Lan gyi them skas. The latter consorted with Lha za ’phrul mo and their son was Dmu King Thod dkar [the father of Shenrab Miwo].

"… Shar rdza gives eight names, including the father Rgyal bon thod dkar, and thus pushes the family lineage of Shenrab Miwo about eight generations back. Nam mkha’i nor bu seems to consider this to be an authentic list of the Dmu kings, though he pushes the list of Shenrab’s ancestors even further back, to thirteen generations."

"….This description of the nine brothers is nowhere to be found in the other accounts of Shenrab Miwo. What can be the possible origin of this description? In chapter seventeen of the Mdo ’dus, there is a list of the Nine Ways of Bon or the nine methods for teaching the doctrines of Bon…. I would therefore argue that most of the names of the eight brothers of Shenrab Miwo as listed in the Mdo ’dus are derived from the doctrinal system of the Nine Ways of Bon." (page 18)

"….The Tibetan terms grub and grol have the connotations of “practicing’ and “liberating,” which belong to Tantric practices, while sgrol (lam) may also refer to the Rdzogs chen path, the ninth of the Nine Ways."

Gurung, Kalsang Norbu. The Emergence of a Myth: In search of the origins of the life story of Shenrab Miwo, the founder of Bon. PhD Dissertation, Leiden University, 2011.