"The trade road that ran from Khorasan & Balkh (Ariana / Aria) to Babylon and Susa - from the northeast to the southwest of present day Iran - was in medieval times called the Great Khorasan Road. One arm of the road ran through Ecbatana (Hamadan) and Kermanshah, beside the rivers Qareh Su and Diyala to Babylon. This could have been the route for Median (as well as Persian) migration. "….http://heritageinstitute.com/zoroastrianism/urmia/

"Urmia at Aryan Trade (Silk) Roads Junction……One arm of the Aryan trade roads (the Silk Roads) went west from Balkh (Bactria) in Central Asia, through Marv, Nishapur and Rai, skirting the Alborz / Elburz mountain range (that runs along the southern shores of the Caspian), to present-day Tabriz just east of upper Lake Urmia. From there one branch of the route proceeded into Cappadocia or present day Turkey. Another branch ran south along the Zagros mountains to present-day Isfahan. If at some point in history, Urmia was home to the predecessors of the Persians, then it would be along the southern branch of the trade route that the Persians migrated south towards Susa and Anshan, finally settling in the land we now know as the province of Fars in Iran. "…..http://heritageinstitute.com/zoroastrianism/urmia/ 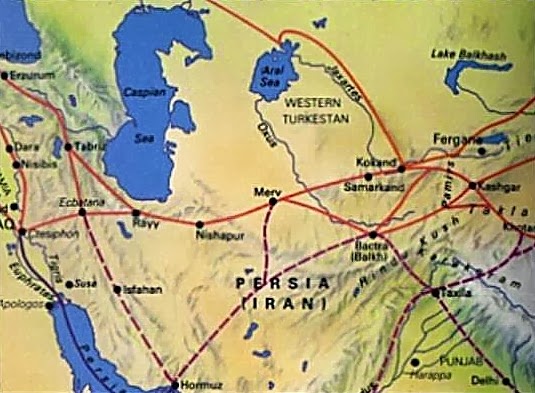 Urmia (pronounced [oɾumiˈje] ( listen)) (Azerbaijani/Persian:اورمیه or ارومیه; Aramaic: ܐܘܪܡܝܐ‎; Armenian: Ուրմիա) variously transliterated as Oroumieh, Oroumiyeh, Orūmīyeh and Urūmiyeh, also formerly known (during the Pahlavi Dynasty, 1925–1979) as Rezaeyeh, Rezā’īyeh, Rezâiyye (Persian: رضائیه‎) is a city in and the capital of West Azerbaijan Province, Iran. At the 2012 census, its population was 1,265,721 with 700,000 households….."Mia" is Aramaic Syriac meaning "water." …. a city situated by a lake and surrounded by rivers, would be the cradle of water. As of 1921, Urmia was also called, Urumia and Urmi.

Lake Urmia (Persian: دریاچه ارومیه‎, Daryache-ye Orumiye, Azerbaijani: Urmu gölü اورمو گؤلو,Armenian: Ուրմիա Լիճ, "Urmia Lij"; ancient name: Lake Matiene) is a salt lake in northwestern Iran near Iran's border with Turkey. The lake is between the Iranian provinces of East Azerbaijan and West Azerbaijan, west of the southern portion of the similarly shaped Caspian Sea. It is the largest lake in the Middle East,[3] and the sixth largest saltwater lake on earth, with a surface area of approximately 5,200 km² (2,000 mile²), 140 km (87 mi) length, 55 km (34 mi) width, and 16 m (52 ft) depth….The lake was known in medieval times as Kabudan, "azure/blue" to the Iranian peoples.

"Urmia is one of the historic ancient cities in Iran with Assyrian origins. The excavations of the ancient ruins near Urmia led to the discovery of utensils that date back to 2000 years B.C.. According to Vladimir Minorsky, there have been villages in the Urmia plain some 2000 years B.C., with their civilization under the influence of Van nation…..In the ancient times, the west bank of Urmia lake was called Gilzan, and in the ninth century B.C. an independent government ruled there which later joined the Urartu or Mana empire; in the eighth century B.C., the area was a vassal of the Asuzh government until it joined the Median Empire after its formation…..The claim that the area was the birthplace of Zoroaster (this is disputed because most experts agree Zoroaster was most likely born in the eastern part of Greater Iran), or even the burial site of one or two of the Zoroastrian priests who allegedly traveled to Bethlehem for Christ’s birth indicate that the city has been one of the largest religious and scientific centers of the ancient times…..

"Geoy Tepe is an archaeological site in north-western Iran, about 7 kilometres south of Urmia (Reżāʾīya). It was found by an aerial survey of ancient sites in Persia done by Erich Schmidt in the 1930s…..The site's mound is 80 feet in height and situated by a natural spring. T. Burton Brown of Great Britain excavated the site from August 1948. It was found to have been continuously occupied from the 4th millennium BCE until 1200 BCE.

"Hasanlu dates from about 7,000 BCE…..Hasanlu is the largest of the historical sites that include the Neolithic sites of Pisdeli Tepe and Hajji Firuz, the Bronze Age and Iron Age sites of Ziwiye and Dinkha Tepe, as well as the sites of Qalatgah, Agrab Tepe and Dalma…..Between 1979-1985, the site of Qalaichi Tepe (7 km. north of Bukan) was plundered on a massive scale before it could be officially excavated…..http://heritageinstitute.com/zoroastrianism/urmia/ 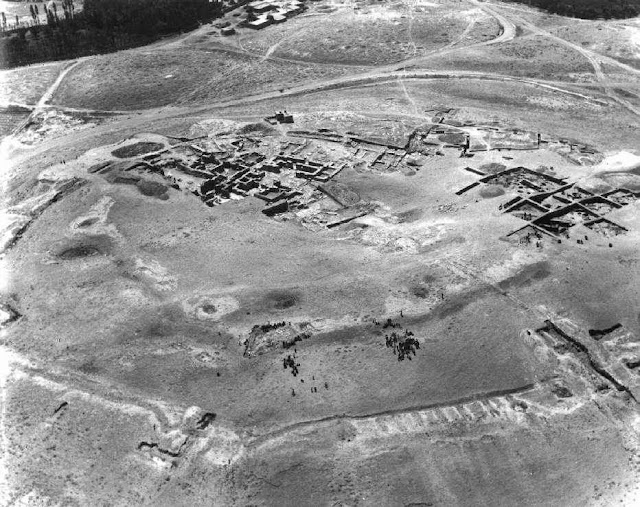 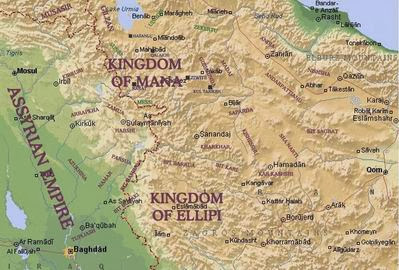 "Towards the end of the Achaemenid Empire, Atropates was governor (satrap) of the Achaemenid province of Media. In the decisive Battle of Gaugamela (October 331 BCE) between Darius and Alexander, Atropates commanded the Achaemenid troops of Media, Caucasian Albania and Sacasene (part of present-day Armenia)….Following his defeat in that battle, Darius fled to the Median capital of Ecbatana, where Atropates gave him hospitality. Darius attempted to raise a new army but was forced to flee Ecbatana in June 330 BCE…..Ecbatana (Old Persian: Haŋgmatana, Greek: Ἀγβάτανα Agbatana in Aeschylus and Herodotus, elsewhere Ἐκβάτανα Ekbatana, Agámtanu by Nabonidos, and Agamatanu at Behistun; modern Hamadan, Iran) (literally: the place of gathering; Hebrew: אַחְמְתָא, Modern Aẖmeta Tiberian ʼAḥməṯā; Latin: Ecbatana) is the supposed capital of Astyages (Istuvegü), which was taken by the Persian emperor Cyrus the Great in the sixth year of Nabonidus (549 BC)…..Under the Persian kings, Ecbatana, situated at the foot of Mount Alvand, became a summer residence. Later, it became the capital of the Parthian kings…Sir Henry Rawlinson attempted to prove that there was a second and older Ecbatana in Media Atropatene on the site of the modern Takht-i-Suleiman.."

"The Greeks thought Ecbatana to be the capital of Media, and ascribed its foundation to Deioces (the Daiukku of the cuneiform inscriptions). It is alleged that he surrounded his palace in Ecbatana with seven concentric walls of different colours. In the 5th century BC, Herodotus wrote of Ecbatana:……"The Medes built the city now called Ecbatana, the walls of which are of great size and strength, rising in circles one within the other. The plan of the place is, that each of the walls should out-top the one beyond it by the battlements. The nature of the ground, which is a gentle hill, favors this arrangements in some degree but it is mainly effected by art. The number of the circles is seven, the royal palace and the treasuries standing within the last. The circuit of the outer wall is very nearly the same with that of Athens. On this wall the battlements are white, of the next black, of the third scarlet, of the fourth blue, the fifth orange; all these colors with paint. The last two have their battlements coated respectively with silver and gold. All these fortifications Deioces had caused to be raised for himself and his own palace."

"A. W. Jackson in Persia Past and Present and Zoroaster, the Prophet of Ancient Iran), strongly links the region around Lake Urmia with Zoroastrianism -…..http://heritageinstitute.com/zoroastrianism/urmia/

"Lake Urmia's ancient Persian name, however, was Chichast (meaning glittering), a reference to the glittering mineral particles suspended in the lake water and its shores, a result of the lake's very high salt content. In the medieval times the lake came to be known as Lake Kabuda, meaning azure in Persian…..…..http://heritageinstitute.com/zoroastrianism/urmia/

"The Lake Urmia region has a wealth of archaeological sites that were home to some of the most advanced Neolithic communities known. Archaeological excavations of settlements in the Lake Urmia area have found artefacts that date from the Neolithic (New Stone) age, that is, from about 7,000 BCE. A number of these settlements were destroyed in the Iron Age around 800 BCE, a dating that coincides with records of devastating Assyrian raids in the region…..http://heritageinstitute.com/zoroastrianism/urmia/

"The Ash Hills of Urmia…..There are sixty-four ash hills scattered around Lake Urmia - a dozen or so within the immediate vicinity of the city of Urmia - each hill rising from a small natural elevation. The hills were said to have been formed from ashes from ancient fire shrines and are called 'hills of the Fire-worshipers' by the local people, though there is no surviving evidence of fire shrines. Professor A. V. Williams Jackson writes in his book, Persia Past and Present, "The hill of Degalah, close to the city (of Urmia), was one such ash-hill. It was three or four hundred yards long, nearly as broad, and a hundred feet high... and easy to examine, since it had been excavated all over by the neighbouring farmers, who had lately taken to using the ashes to fertilize their fields and make saltpetre with." He was informed that within local memory, stone buildings had stood on the hill, but they had all been pulled down to build the local village."…. http://heritageinstitute.com/zoroastrianism/urmia/

"Professor Jackson also informs us that another ash hill called Lakki was located seventeen miles north of Urmia and that six miles east of Lakki was the ash hill of Termani. In Jackson's time, the Termani cone-shaped mound was still fairly intact and 'the outline of an old building's foundation could be traced on the ground nearby'. The remaining stones from the ruined building were large enough to make the villagers wonder how they could have been moved into place. They remarked that in the 1880's, after a shaft had been sunk into the hill, a large image was discovered buried in the ashes. The local Muslims destroyed this statue, believing it to be an idol. Jackson observed that the ground around was the mound strewn with potsherds."….…. http://heritageinstitute.com/zoroastrianism/urmia/

"Historically, Azerbaijan covered a vast territory from the Caucasus Mountains to the Sefidrud River in present day Iran. Numerous caravan routes, including the Great Silk Road, connecting such great civilizations as the Sumer, Assyrian, Greek, Roman, Persian, Turkic, Indian, Chinese, etc., passed through the territory of Azerbaijan. Each of the civilizations by force or by endearment tried to plant their culture and beliefs in Azerbaijan. Azerbaijan experienced almost all the major religions….Byzantium from the west and Syria from the south-west tried to root Christianity in Azerbaijan, from the south-east Iran planted Zoroastrism, the Khazars attempted to bring Judaism. The Seldjiks, mostly Turkic Mongols, introduced Buddhism….The Temple of Fire in Takhta - Suleyman, mentioned in "Avesta", was not only one of the most ancient fire-worship temples, but also one of the most revered. The Sasanid Shahinshahs were crowned there, though they had highly recognized fire-worship temples of their own. Yampolsky, for example, called Azerbaijan the Papal area of Zoroastrism. One such area was evidently the area of Baku including Gobustan and Absheron that had the still active fire-worship temple as well as numerous ancient temples and altars of fire on its territory. A unique rock Mozdait temple dating back to the beginning of our era has been preserved in the region of Zakatala. "…. http://www.mehriban-aliyeva.org/en/article/item/1557

Lapis lazuli and the Great Khorasan Road by Y. Majidzadeh at Persee.fr.