Kukuraja…"Kukuraja was a mahasiddha within the lineages of Esoteric Buddhism and he was contemporaneous with Indrabhuti in Oddiyana (also known as King Ja) and Kambalapada (also known as Lawapa)…http://en.wikipedia.org/wiki/Kukuraja 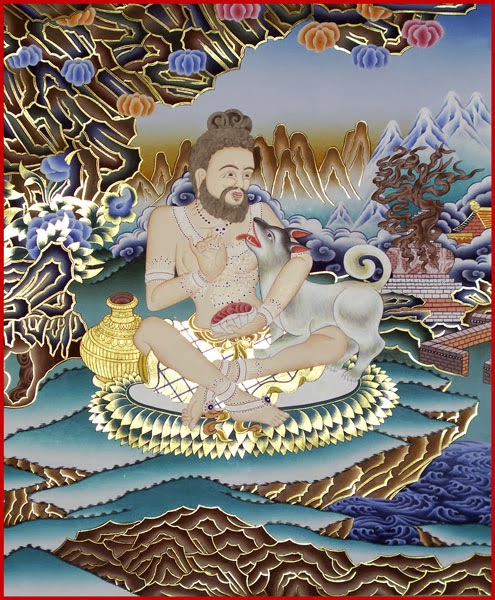 "Some sources hold that it was Kukuraja who prophesied the birth of Garab Dorje, the founder of the human lineage of the Nyingmapa Dzogchen Tantra teachings though the chronology is problematic. The tradition holds that there may be multiple Kukaraja's which are conflated (a view also propounded by modern scholarship) or the different Kukkaraja according to Nyingma tradition may be understood as a lineage of mindstream emanations."….http://en.wikipedia.org/wiki/Kukuraja

"…"Then King Ja taught the book to master Uparaja, who was renowned as a great scholar, but he could not understand their symbolic conventions and meaning. The king then taught them to the master Kukkuraja. He intuitively understood the chapter on the "Vision of Vajrasattva", from the Tantra of the Magical Net of Vajrasattva [Wylie: rdo rje sems dpa' sgyu 'phrul drva ba (also known as the Guhyagarbha Tantra)], and practiced it, whereupon Vajrasattva revealed himself and predicted that the Lord of Secrets would reveal the meanings of this tantra thereafter. When he had practised more, the Lord of Secrets actually appeared and granted him [Kukkuraja] the complete empowerment of the authentic teaching and of all vehicles. Then he told him to request the verbal teaching from the Licchavi Vimalakirti. It is said that, following the transmitted precepts of the Lord of Secrets, master Kukkuraja divided [the Mahayoga tantras] into the Eighteen Great Tantrapitaka (tantra chen-po sde bco-brgyad) and taught them to King Ja."…… The Nyingma School of Tibetan Buddhism: Its Fundamentals and History. Boston, USA: Wisdom Publications.

Kukuraja (ku ku ra dza / ku ku ra tsa – the Mahasiddha who lived with a cohort of dogs.) Another Kukuraja was one of the teachers of Marpa Lotsawa.

Kukuraja—the Dog King—lived on an island in the midst of a swamp of poison. He was known also as Kukkuripa—the Dog Lover—he is famous for these lines:…
"Where deliberate effort and self-conscious striving are present – Buddha is absent….
In view of this all chanting, rituals, and offerings are futile….
Within the peak experience of the Lama’s inspired transmission however, Buddha is ever-present – but who is there who wishes to see that?"
…..http://arobuddhism.org/words/the-year-of-the-dog.html

"Kukuripa [Tib. Shiwa Sangpo] (ca. 1000) was one of the Mahasiddhas (one of the 84 greatest yogis) and one of Tilopa's teachers. He stayed not far from Pullahari in western Magadha, where he lived on an island "in a poison lake," surrounded by dogs. One of the females reveals herself as a dakini, and she is instrumental in his Realization, for . . . he descended from paradise to rejoin her in the cave…….The dog leaped and pranced with joy when she caught sight of her beloved master. But no sooner did he sit down and begin to scratch her favorite spot, just behind the ears, than she vanished from sight! There before him, wreathed in a cloud of glory, stood a radiantly beautiful Dakini. " ~ Keith Dowman's Masters of Enchantment. Rochester, Vermont: Inner Traditions, 1988. [link is to newer edition]

"Kukuraja was a Buddhist of brahmin origins who practiced in a cave in the company of a dog. In the legends of Guru Rinpoche, after some tantric scriptures landed on the palace roof, King Indrabodhi brought them to Kukuraja for interpretation."….http://www.khandro.net/animal_dog.htm

Kukkuraja the Elder, the son of Kukkuraja Gatu and his wife Crescent Moon….Wellsprings of the Great Perfection: The Lives and Insights of the Early Masters……edited by Michael Tweed, Marcia Binder Schmidt

"Aa monk, Acarya Pramodavajra lived a purely monastic, disciplined life for many years. His discipline as a monk prepared him for the contemplative life. With time he more and more turned away from scholastic studies, to sit in quiet meditation. He meditated in his monastery cell and in the caves and forests of the Kingdom of Uddiyana……At some point in the maturation of his spiritual evolution, he received the blessed Empowerment and Transmission of the profound Mahayoga teachings of the Secret Matrix Tradition (Guhyagarbha-tantra) from the renowned personal guru of the King of Uddiyana, the great white-robed saint Mahasiddha Kukkuraja. After that he retired into retreat on the slopes of Mount Suryaprakasa in the north, where he performed mantra practice in a small grass hut…….Kukkuraja's instruction had been very direct. "Everything without exception is the Divine Body-Speech-Mind," he had said. "The Divine Body-Speech-Mind is all-encompassing. Thus know your ultimate identity to be Vajrasattva, the Divine Body-Speech-Mind." As the Tibetan text of the Kulaya-raja Sutra (Kun.byed.rgyal.po'i .mdo) states: "When everything is seen as the Great Self-identity (bdag.nyid.chen.po), it is known as Atiyoga." Therefore Acarya Pramodavajra's spiritual practice (sadhana) consisted of meditating on the core of his being as ultimately the Absolute itself. For many years the meditation and mantra practice of the one divine Vajrasattva became his sole activity."….http://www.dharmawheel.net/viewtopic.php?f=33&t=1766