Swat is a valley and an administrative district in the Khyber Pakhtunkhwa, Pakistan. It is the upper valley of the Swat River, which rises in the Hindu Kush range. The capital of Swat is Saidu Sharif, but the main town in the Swat valley is Mingora…. 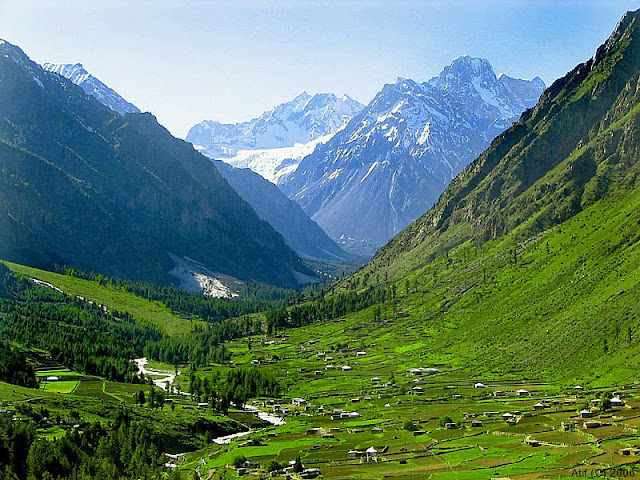 Around the 2nd century BC, the area was occupied by Buddhists, who were attracted by the peace and serenity of the land. There are many remains that testify to their skills as sculptors and architects….Although it is generally accepted that Tantric Buddhism first developed in the country of Uddiyana or Odra Desha under King Indrabhuti, there is an old and well known scholarly dispute as to whether Uddiyana or Odra was in the Swat valley, Odisha or some other place. There are some claims that Tantric Buddhism first developed in Swat under King Indrabhuti. One of the original Siddhas, Indrabhuti flourished in the early eighth century AD and was the king of Oddiyana in the Kabul valley. His son Padmasambhava, a legendary Buddhist mystic from the valley who introduced Tantric Buddhism to Tibet, is credited with establishing the first Buddhist monastery here. Indrabhuti's sister, Lakshminkaradevi, was also an accomplished siddha of the 9th century AD.

"Buddhism has a long history in the Pakistan region — over time being part of areas within Bactria, the Indo-Greek Kingdom, the Kushan Empire, Ancient India with the Maurya Empire of Ashoka, the Punjab region, and Indus River Valley cultures — areas now within the nation of Pakistan. Buddhist scholar Kumāralabdha (童受) of Taxila was comparable to Aryadeva, Aśvaghoṣa and Nagarjuna. Currently there is a small community of at least 1,500 Pakistani Buddhist in the country (Population of 179 million)….The majority of people in Gandhara, present day Southern Khyber Pakhtunkhwa province, were Buddhist. Gandhara was largely Mahayana Buddhist, but also a stronghold of Vajrayana Buddhism. The Swat Valley, known in antiquity as Uddiyana, was a kingdom tributary to Gandhara. There are many archaeological sites from the Buddhist era in Swat….The Buddhist sage Padmasambhava is said to have been born in a village near the present day town of Chakdara in Lower Dir District, which was then a part of Oddiyana. Padmasambhava is known as Guru Rinpoche in Tibetan and it is he who introduced Vajrayana Buddhism in Tibet."….http://en.wikipedia.org/wiki/Buddhism_in_Pakistan

"Ancient Gandhara, the valley of Peshawar and Kabul River, with the adjacent hilly regions of Swat and Buner, Dir and Bajaur was one of the earliest centers of Buddhist religion and culture following the reign of the Mauryan emperor Ashoka, in the third century BC. The name Gandhara first occurs in the Rigveda, which is usually identified with the region……The Kingdom of Gandhara lasted from the Vedic period (c. 1500-500 BC) to the 11th century AD. As a center of Buddhist culture, it attained its height from the 1st century to the 5th century under the Kushan Kings. The Persian term Shahi is used by history writer Al-Biruni[4] to refer to the ruling dynasty[5] that took over from the Kabul Shahi[6] and ruled the region during the period prior to Muslim conquests of the 10th and 11th centuries. After it was conquered by Mahmud of Ghazni in 1021 AD, the name Gandhara disappeared….Kandahar. City, south central Afghanistan. The city takes its name from that of the region's former people, the Ghandara…..The name of the Gandhāris is attested in the Rigveda (RV 1.126.7[10]) and in ancient inscriptions dating back to Achaemenid Persia. The Behistun inscription listing the 23 territories of King Darius I (519 BC) includes Gandāra along with Bactria and Thatagush…. 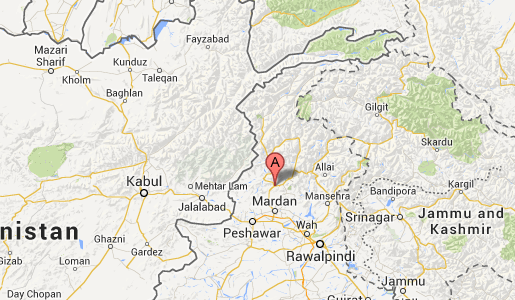 Kapisa….The boundaries of Gandhara varied throughout history. Sometimes the Peshawar valley and Taxila were collectively referred to as Gandhara and sometimes the Swat valley (Sanskrit: Suvāstu) was also included. The heart of Gandhara, however, was always the Peshawar valley. The kingdom was ruled from capitals at Kapisa (Bagram), Pushkalavati (Charsadda), Taxila, Purushapura (Peshawar) and in its final days from Udabhandapura (Hund) on the River Indus….Kapisa (Bagram) became the capital of the Kushan Empire in the 1st century, from here they invaded and conquered Peshawar in the south…..

"When Giuseppe Tucci strongly proposed the idea (in 1940) that the land known as Uddiyana was finally identified as the Swat valley, he did not know Patrul Rinpoche's text (translated in 1994). Instead, he based himself on two medieval Tibetan travelers who had visited Swat and believed it to be the legendary region that produced such well known adepts as Garab Dorje, Padmasambhava, Luipa and Tilopa - not to mention their mainly female teachers; the women who made this country famous as Paradise of the Dakinis. Tucci had translated these medieval texts and published them as Travels of Tibetan Pilgrims in the Swat Valley - and from then onwards, most authors and translators kept reciting and reprinting the mantra "Uddiyana is Swat" until almost everyone believed it……At some point, however, due to unconvincing investigations in Swat - and probably due to a publication I am not aware of - the scholarly community gets more cautious and the concept of Uddiyana shifts away from the Swat Valley to a larger region: in fact the whole area of mountain ranges (and mountain peoples) from North-eastern Afghanistan to the Kailas range in the far West of Tibet.".....http://yoniversum.nl/dakini/uddiyana.html

"This new concept of a greater Uddiyana is described most objectively… by John Myrdhin Reynolds. Having discussed Tucci's apparent discovery and the subsequent failure of archeology and art-history to back up this claim, he concludes that perhaps Uddiyana is actually the name of a much wider geographical area than the Swat Valley alone, one embracing parts of Pakistan, Afghanistan, and even Western Tibet (Zhang-zhung). The best approach is to remain open-minded and not restrict the name only to the Swat Valley." [1996, The Golden Letters. Snow Lion Publications] 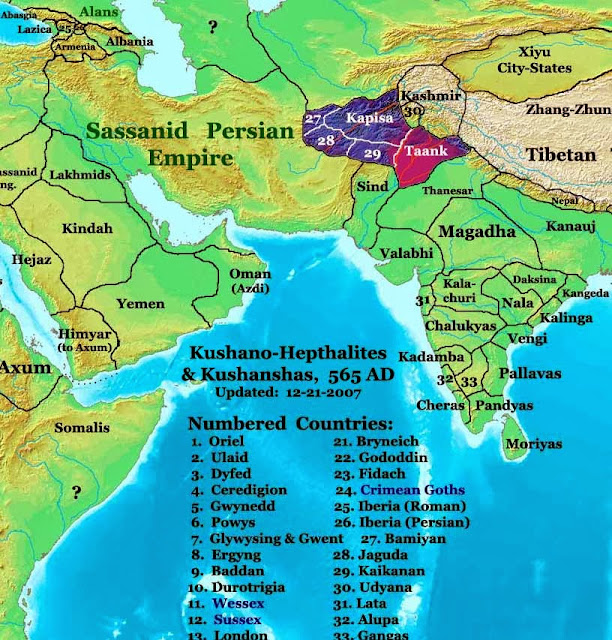 Andan Dheri Stupa…."The bKa’ brgyud (Kagyu) sect of Tibetan Buddhism identifies the lake with Andan Dheri stupa, located near the tiny village of Uchh near Chakdara in the lower Swat Valley. A spring was said to flow from the base of the stupa to form the lake. Archaeologists have found the stupa but no spring or lake can be identified….. in the life of Sri Pramodavajra, and later again in the biography of Lord Padmasambhava, that this sacred lake is highly significant…..Archaeology6 has shown that the great stupa of Andan Dheri stood 80 feet high (24 metres) and was surrounded by 14 votive stupas. This must have been the location of the famous Shankarakuta Stupa cited by early Buddhist historians in the Dzogchen tradition, the dazzling monument mentioned by Huen Tsiang and which was said to have graced the shore of sacred Dhanakosha lake…..According to tradition, the great white Shankarakuta Stupa and Temple was surrounded by 1,608 small chapels. Prince Uparaja and Princess Alokabhasvati, rulers of the princedom of Dhanakosha, lived in a splendid palace near there. The era in which they are said to have reigned, according to the legends, was some 360 years after the passing away of Buddha Sakyamuni (568-488 B.C.). But we know, historically, that they must have lived in the latter part of the seventh century…..http://www.dharmafellowship.org

"There is another characteristic which Huen Tsiang noted concerning the people of this amazing Kingdom of Uddiyana. In what we take to be a disapproving tone, Huen Tsiang wrote, "They are addicted to the art of reciting charms."1 In fact, this statement may well be one of the earliest references concerning the Buddhist use of mantra that is known to scholars. Huen Tsiang, an adherent of a form of Buddhism that knows nothing of the Vajra Way, perceived mantra recitation not as a type of yoga, but rather as the utterance of superstitious spells…..already by the seventh century the usage of secret mantra, i.e., a system of Tantra, was already prevalent in Uddiyana. For in later ages, the Kingdom of Uddiyana is spoken of as the land of Tantra par excellence. Huen Tsiang's statement shows that Tantra was an ancient tradition in the Northwest, long before it gained popularity in India."……http://www.dharmafellowship.org

Kingdom of Kapisi…..located in what is now Afghanistan. The kingdom stretched from the Hindu Kush in the north to Bamiyan and Kandahar in the south and west, out as far as Jalalabad District in the east. The kingdom was, for a time, under the Turki Sahi house….The Kingdom of Kapisi was, in the Chinese chronicles Book of Sui, associated with the Kingdom of Cao…..Around 600 AD, the Chinese Buddhist monk Xuanzang made a pilgrimage to Kapisi, and described there the cultivation of rice and wheat, and a king of the Suli tribe. In his chronicle, he relates that in Kapisi were over 6,000 monks of a heretical sect of the Mahayana school of Buddhism……At one point, Bagram was the capital of the kingdom, though in the 7th century, the center of power of Kapisi shifted to Kabul."