Zabul (Persian and Pashto: زابل‎) is one of the 34 provinces of Afghanistan, located in the south of the country. It has a population of about 289,300, which is mostly a rural tribal society. Zabul became an independent province from neighbouring Kandahar in 1963. Historically, it was part of the Zabulistan region. Qalat serves as the capital of the province.

"…..in the old tradition of the 84 Mahasiddhas that the Kingdom of Uddiyana was divided between two countries, to the North and South. To the North, it bordered on the land of Shambhala (i.e., the Kingdom of Kapisa)…….….http://www.dharmafellowship.org/biographies/historicalsaints/pramodavajra.htm"…. 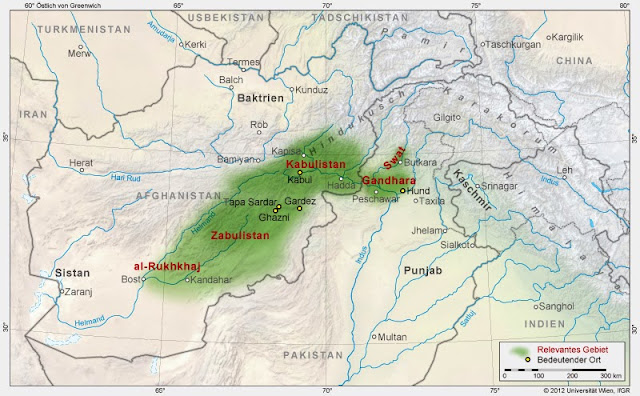 Pashay Ghar, Daychopan, Zabul, Afghanistan…Qalat (Pashto: قلات‎) is a town in southern Afghanistan and the
capital of Zabul Province. It is linked by a highway with Kandahar to the west and Ghazni to the east….
Qalat has been known as Qalāt, Qalat-i-Ghilzai, Qalat-i-Tokhi, Kalat, and Kalat-i Naser, Kalat-i Ghiljei…..
The local skyline is dominated by a fortress constructed by the forces of Alexander the Great: Qalat Fortress..

"…..the territory south of the Hindu Kush between Kandahar and Ghazni is generally known as Zabulistan. According to Persian mythology, Zabulistan was the country of Iranian hero Rostam……Buddhist and Hindu Shahi period….From the 7th century to 11th century, the region was ruled by Shahi kings. Later, it was conquered by the Ghaznavids of Ghazni."

"In southern and eastern Afghanistan, the regions of Zamindawar (Zamin I Datbar or land of the justice giver, the classical Archosia) and Zabulistan or Zabul (Jabala, Kapisha, Kia pi shi) and Kabul, the Arabs were effectively opposed for more than two centuries, from 643 to 870 AD, by the indigenous rulers the Zunbils and the related Kabul-Shahs of the dynasty which became known as the Buddhist-Shahi. With Makran and Baluchistan and much of Sindh this area can be reckoned to belong to the cultural and political frontier zone between India and Persia. It is clear however that in the seventh to the ninth centuries the Zunbils and their kinsmen the Kabulshahs ruled over a predominantly Indian rather than a Persian realm. The Arab geographers, in effect commonly speak of that king of "Al Hind" ...(who) bore the title of Zunbil."……Al-Hind: Early medieval India and the expansion of Islam, 7th-11th centuries By André Wink Edition: illustrated Published by BRILL, 2002

"…. The early Arab governors of Sistan had at times penetrated as far as Ghazna and Kabul, but these had been little more than slave and plunder raids. There was fierce resistance from the local rulers of these regions, above all from the line of Zunbils who ruled in Zamindavar and Zabulistan."……The Cambridge history of Iran By William Bayne Fisher, Richard Nelson Frye

"The region of southern Afghanistan was first invaded by Muslim Arabs from Zaranj in what is now Nimruz Province. From there they marched toward Bost, Kandahar, Zabulistan, and reached Kabul. In 683 Kabul revolted and defeated the Muslim army, but two years later Zabul's army was routed by the Arabs."We are told that it was only in 870 AD that Zabulistan was finally conquered by one Yakub who was the virtual ruler of the neighbouring Iranian province of Siestan. The king was killed and his subjects were made Muslims." "One of the most important aspects of the early Saffarid policy of significance for the spread of Islam in Afghanistan and on the borders of India long after their empire had collapsed, was that of expansion into eastern Afghanistan. The early Arab governors of Sistan had at times penetrated as far as Ghazana and Kabul, but these had been little more than slave and plunder raids. There was a fierce resistance from the local rulers of these regions, above all from the line of Zunbils who ruled in Zamindavar and Zabulistan and who were probably epigoni of the southern Hepthalite or Chionite kingdom of Zabul; on more than one occasion, these Zunbils inflicted sharp defeats on the Muslims. The Zunbils were linked with the Kabul-Shahs of the Shahi dynasty; the whole river valley was at this time culturally and religiously an outpost of the Indian world, as of course it had been in the earlier centuries during the heyday of the Buddhist Gandhara civilization."…..The Cambridge History of Iran By Richard Nelson Frye, William Bayne Fisher,

"The Shahi (Devanagari: शाही), Sahi, also called Shahiya dynasties ruled one of the Middle kingdoms of India which included portions of the Kabulistan and the old province of Gandhara (now in northern Pakistan), from the decline of the Kushan Empire in the 3rd century to the early 9th century. The kingdom was known as "Kabul Shahi" (Kabul-shāhān or Ratbél-shāhān in Persian کابلشاهان یا رتبیل شاهان) between 565 and 879 AD when they had Kapisa and Kabul as their capitals, and later as Hindu Shahi…..The Shahis of Kabul/Gandhara are generally divided into the two eras of the so-called Buddhist-Shahis and the so-called Hindu-Shahis, with the change-over thought to have occurred sometime around AD 870."….André Wink, Early Medieval India and the Expansion of Islam: 7th-11th Centuries, (Brill, 2002)

"Hsuen Tsang clearly describes the ruler of Kapisa/Kabul, whom he had personally met, as a devout Buddhist and a Kshatriya and not a Tu-kiue/Tu-kue (Turk). The Chinese pilgrim Xuanzang knew well enough what a Turk was since he had come to Kabul through their country."

"Commenting on the rise of Shahi dynasty in Kabul/Kapisa, Charles Frederick Oldham observes: "Kabulistan must have passed through many vicissitudes during the troublous times which followed the overthrow of the great Persian empire by the Alexander. It no doubt fell for a time under the sway of foreign rulers (Yavanas, Kushanas, Hunas etc). The great mass of the population, however, remained Zoroastrian and Polytheists. And probably too, the Kshatriya chiefs from India retained great shadow of authority, and conquered Kabulistan when the opportunity arose."….Charles Frederick Oldham The Sun and the Serpent: A Contribution to the History of Serpent-worship, 1905

"….in 870, Yaqub bin Laith as-Saffar, a local ruler from the Saffarid dynasty of Zaranj, Afghanistan, conquered most of present-day Afghanistan in the name of Islam. In many cases, the people he conquered had rebelled against their Islamic overlords and reverted to prior forms of worship."….. Dupree, Nancy Hatch (1971) "Sites in Perspective (Chapter 3)" An Historical Guide To Afghanistan