"Kunchen Dolpopa was the first Jonang master to extensively teach Zhentong. In his most famous work, Mountain Dharma: An Ocean of Definitive Meaning (ri chos nges don rgya mtsho), Kunchen Dolpopa clarified the Zhentong view. These are referred to as the teachings of the “Heart’s Essence” (snying po’i don). As Kunchen Dolpopa’s Mountain Dharma and other Jonang texts were banned in the 17th century, they became extremely rare. In the 1970s and 1980s a few of these texts were re-discovered and re-printed, notably through the agency of His Holiness Dilgo Khyentse Rinpoche."……http://khyung.com/garuda-buddhist-sadhanas/.…….http://greatmiddleway.wordpress.com/2012/01/31/the-red-garudas-cry/ 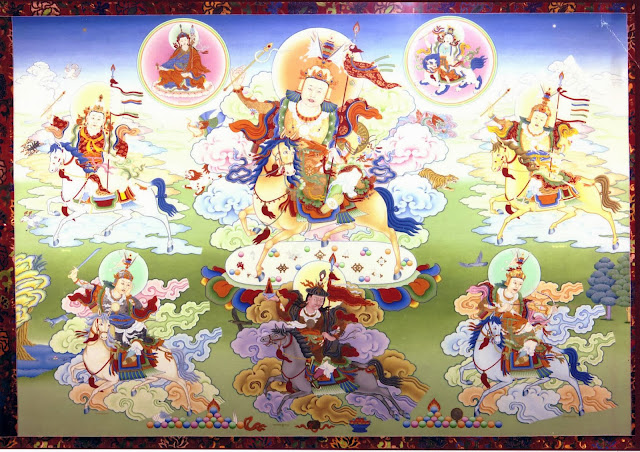 ”The Red Garuda’s Cry to the Kalkins of Shambala” 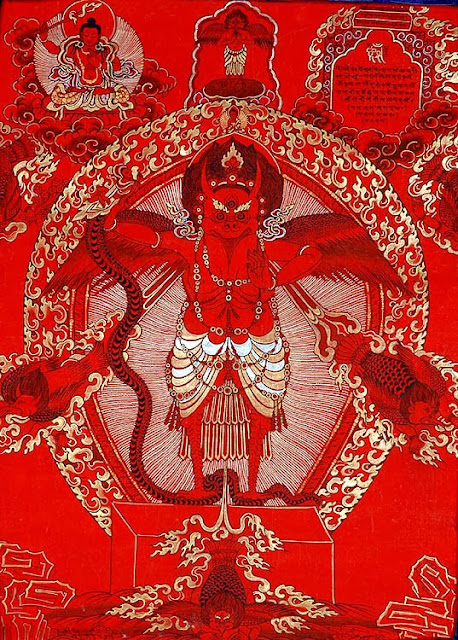 "Dolpopa Sherab Gyaltsen (Tibetan: དོལ་པོ་པ་ཤེས་རབ་རྒྱལ་མཚན་, Wylie: Dol-po-pa Shes-rab Rgyal-mtshan) (1292–1361), known simply as Dolpopa, the Tibetan Buddhist master known as "The Buddha from Dolpo," is often seen as the founder of the Jonangpa tradition of Tibetan Buddhism. While the doctrinal origins of the Jonangpa tradition in Tibet can be traced to early 12th century master Yumo Mikyo Dorje, they became much wider known through the efforts of Dolpopa Sherab Gyaltsen…..Dolpopa became one of the most influential, original yet controversial of Tibetan teachers. Originally a monk of the Sakya order, he developed a teaching known as Shentong or Zhentong (gzhan stong), which is closely tied to the Indian Yogācāra school and the tathāgatagarbha tradition. He is considered to be one of the greatest exponents and practitioners of the Kālacakra or "Wheel of Time"……

"Newland (1992: pp. 30–31) conveys the political intrigue of the Great Fifth against the Jonangpa, the king of Tsang (gtsang) and the writings and philosophy of Dolpopa: Tsong-ka-pa and his successors have been especially vehement in their objections to the views of Shay-rap-gyel-tsen, (shes rab rgyal mthsan, 1292-1361) and his followers. Shay-rap-gyel-tsen, an abbot of Jo-mo-nang, formulated his view in Ocean of Definitive Meaning (nges don rgya mtsho) and other writings; his followers are called Jo-nang-bas. As Ge-luk political power reached its apogee under the Fifth Dalai Lama in the seventeenth century, the Jo-nang-bas were proscribed and their monasteries and other property were completely confiscated and converted to Ge-luk use. Tibet's intersectarian conflicts were almost always driven by motives more political than "purely philosophical", indeed, the Jo-nang-bas were allies of the king of Tsang (gtsang), the main political and military adversary of Ge-luk in the first half of the seventeenth century. On the other hand, for more than two hundred years before they destroyed the Jo-nang-ba order the Ge-luk-bas had been denouncing Shay-rap-gyel-tsen's philosophy as something utterly beyond the pale of Mahāyāna Buddhism...While the immediate occasion for the persecution of Jo-nang was its defeat in a power struggle, proscription suggested itself as a penalty in the context of a long history of substantial and deeply felt philosophical differences. This hostility is reflected in the banning of Shay-rap-gyel-tsen's major books from the premises of Ge-luk monasteries more than 150 years prior to his order's extinction."…..Newland, Guy (1992). The Two Truths: in the Mādhyamika Philosophy of the Ge-luk-ba Order of Tibetan Buddhism. Ithaca, New York, USA: Snow Lion Publications. ISBN 0-937938-79-3.

"The Tibetan Buddhist Rimé Institute was founded by Khentrul Rinpoche in 2005. Rimé means “non-sectarian” and is unusual within Buddhism. Rimé Institute offers profound and extensive teachings from all Tibetan Buddhist traditions, including Mahayana and Tantrayana……In addition, we specialise in the teachings of the Jonang tradition which includes the Shentong (or Zhentong) Madhyamaka view and the Kalachakra Six Yoga practice. It is rare to encounter either of these doctrines outside of Tibet itself, and both are said to play an important role in the future of Buddhism and world peace….Four traditions of Tibetan Buddhism are well known today, they include Nyingma, Kagyu, Sakya and Gelug. There is also a fifth living tradition called Jonang that is lesser known outside Tibet. Many people have heard of the Rangtong Madhyamaka view emphasised in all major traditions, however Jonangpa uphold the Zhentong Madhyamaka philosophy – an important and conclusive way to describe the Buddhist view of emptiness."…..http://rimebuddhism.com/about/

"Shentong…….Since this life is appearance-emptiness and like a reflection of the moon on a pond, past and future lives are also appearance-emptiness and like reflections of moons on ponds. Feeling happy and feeling sad are just like thoughts that arise in a dream. If we know this well, then we will have realized the profound view, which is wisdom devoid of all mental fabrications - spros-pa-thams-cad-dang-bral-ba'i-ye-shes…….Just like every appearance in the relative world is empty of itself, the clear light is empty of “adventitious, fleeting stains,” glo-bur-gyi-dri-ma-med-pa. In other words, the clear light is “empty of adventitious, fleeting thoughts,” glo-bur-gyi-rnam-rtog-med-pa. Proponents of the empty-of-other view are masters and disciples of what has come to be known as gzhan-stong-dbu-ma, the “Shentong ‘Great’ Madhyamika School.”……http://www.rinpoche.com/teachings/shentong.htm#_ftn3

"The Jonang (Tibetan: ཇོ་ནང་, Wylie: Jo-nang, ZYPY: Qonang; Chinese: 觉囊) is one of the schools of Tibetan Buddhism. Its origins in Tibet can be traced to early 12th century master Yumo Mikyo Dorje, but became much wider known with the help of Dolpopa Sherab Gyeltsen, a monk originally trained in the Sakya school. The Jonang school was widely thought to have become extinct in the late 17th century at the hands of the Fifth Dalai Lama who forcibly annexed the Jonang monasteries to his Gelug school, declaring them heretical. Recently, however, it was discovered that some remote Jonang monasteries escaped this fate and have continued practicing uninterrupted to this day. According to Gruschke, an estimated 5,000 monks and nuns of the Jonang tradition practice today in areas at the edge of historic Gelug influence…..The Jonang tradition combines two specific teachings, what has come to be known as the zhentong (or shentong) philosophy of emptiness, and the Dro-lineage of the Kalachakra tantra. The origin of this combination in Tibet is traced to the master Yumo Mikyo Dorje - an 11th/12th century pupil of the Kashmiri master Somanatha…..While the Gelugpa embraced the Jonang teaching on the Kalachakra, they ultimately opposed the Jonangpa (followers of the Jonang) over a difference in philosophical view. Yumo Mikyo Dorje, Dolpopa Sherab Gyeltsen and subsequent lamas maintained a teaching known as zhentong, which holds that only the clear-light, non-dual nature of the mind is "real", and everything else is empty of inherent existence. The Gelug school held the distinct but related rangtong view that all phenomena are empty (of inherent existence) and no thing or process (including Mind and its qualities) may be asserted as independent or inherently real (neither may phenomena be asserted as "unreal" - in short, both extreme assertions are seen to be groundless, and the middle way that phenomena are non-inherently real is asserted). "…..Stearns, Cyrus (1999). The Buddha from Dolpo: A Study of the Life and Thought of the Tibetan Master Dolpopa Sherab Gyaltsen. State University of New York Press. ISBN 0-7914-4191-1