"Bamyan (Persian: بامیان Bāmyān‎), also spelled Bamiyan and Bamian, is the capital of Bamyan Province in central Afghanistan. Bamyan was the site of an early Hindu–Buddhist monastery from which Bamyan takes its name (Sanskrit varmayana, "coloured"). Bamyan's name is translated as ‘The Place of Shining Light’. Many statues of Buddha are carved into the sides of cliffs facing Bamyan city. In 2008, Bamyan was found to be the home of the world's oldest oil paintings. The Bamiyan valley marked the most westerly point of Buddhist expansion and was a crucial hub of trade for much of the second millennium CE. It was a place where East met West and its archaeology reveals a blend of Greek, Turkish, Persian, Chinese and Indian influence……The valley is car dled between the parallel mountain ranges of the Hindu Kush and the Koh-i-Baba…. 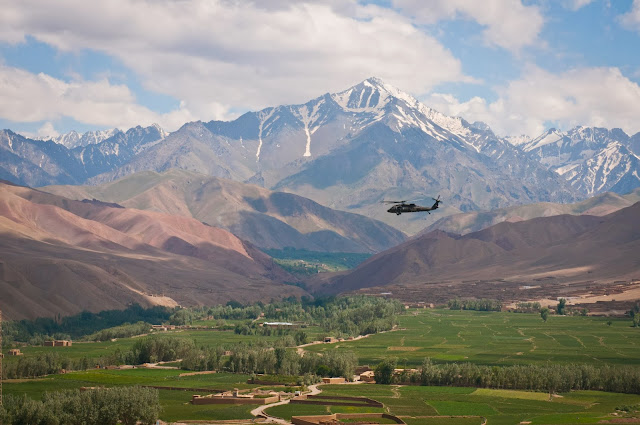 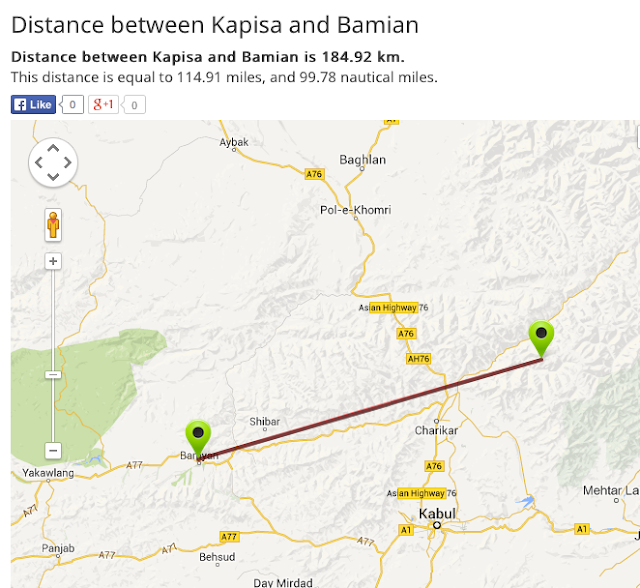 "The first accurate information regarding Bamiyan was recorded the Chinese scholar-monk Xuan Zang (Hsuan-tsang) who travelled up the Balkh River and crossed the Hindu Kush , reaching Bamiyan in about 630…..According to Xuan Zang, the kingdom of Bamiyan was "more than two thousand li (1li = 2km) east to west, and more than three hundred li north to south," a long, narrow land that followed the topography of the river valley. The capital was "six or seven li in length, and at its center stood the palace…..

"The Silla monk Hui Chao ,the last to describe Bamiyan's appearance as a Buddhist city, writes that when he arrived in Bamiyan from Ghazni in 726, the ruler belonged to an ethnic group called Hu, with no allegiance to any other nation, but strangely enough, he makes no mention of the colossal Buddhas seen by Xuan Zang. Nearly a century after Xuan Zang's visit, Bamiyan was still a Buddhist city, but Hui Chao notes that both the Hinayana and Mahayana traditions were being practiced in contrast to Xuan Zang's time, when the teachings had been exclusively Hinayana…..Not long after Hui Chao left Bamiyan, during the reign (754-775) of the second caliph of the Abbasid caliphate, al-Mansur, the king of Bamiyan surrendered to Islamic forces under Mazahim b. Bistam .."….http://www.afghanembassy.com.pl/cms/en/afghanistan/bamiyan

"Bāmīān. The rupestral (composed of or inscribed on rock) monasteries in the valley of Bāmīān are located at the heart of the Hindu Kush, on the arduous route connecting Kāpīsā and Bactria…. Occupied probably by the 3rd century A.D. and certainly up until the 7th or 8th centuries, the sanctuaries are decorated with painted clay reliefs on a painted base. Influences from Sasanian Iran and the later Indian culture of Gandhāra and the post-Gupta period are clearly in evidence. It is highly probable that these symbioses were encouraged by the Kidarites (the later Kushans) or even the Hephthalites, some of whom, according to Chinese pilgrims, were good Buddhists…. On a cliff oriented toward the south two monumental niches enclose enormous statues of the Buddha. The interior of the niches was covered entirely by holy figures with multicolored halos and mandorlas …. Under the vault protecting the 38 meter Buddha a grand solar god, perhaps Mithra, is dressed in caftan and flowing cloak, as are two rows of donor-kings on the springing of the vault…. In other niches, frontal boddhisattvas draped in dhotis and loose scarves are sometimes placed under short frontons…. The ceilings evoke familiar structures in Central Asia, while the domes imitate Iranian architecture….The decorations of the neighboring sites of Kakrāk… and Fōlādī correspond to those of the late Bāmīān period …. “A Short Note on some Recently Discovered Buddhist grottoes near Bamiyan, Afghanistan,” East and West 11, 1960 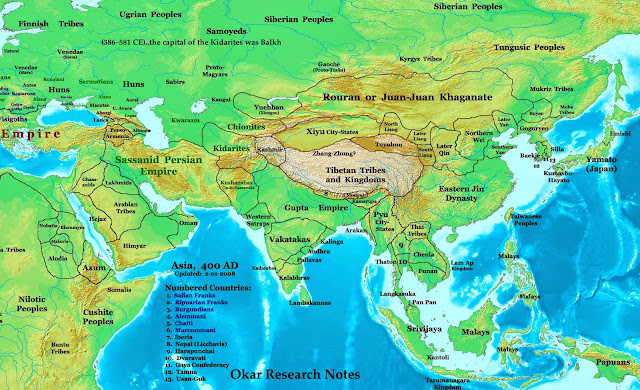 Ki Clan….."The Kidarite (Chinese: Ki-To-Lo) were a dynasty of the "Ki" clan, probably originating from the Uar people…. (the later Kushans)….They were part of the complex of Iranian-speaking tribes known collectively as Xionites or "Hunas"….During the 4th-5th century they established the Kidarite kingdom…..The Kidarites, a nomadic clan, are supposed to have arrived in Bactria with the great migrations of the second half of the 4th century….from 360 AD after Kidara II led a Bactrian portion of "Hunni" to overthrow the Kushans in India…. At this time the Kidarites successfully controlled the length of the Oxus from the Hindu Kush all the way to the Aral Sea…"……GRENET, F. « Regional Interaction in Central Asia and North-West India in the Kidarite and Hephtalite Period », in SIMS-WILLIAMS, N. (ed.), Indo-Iranian Languages and Peoples, (Proceedings of the British Academy), London, 2002, p. 203–224. 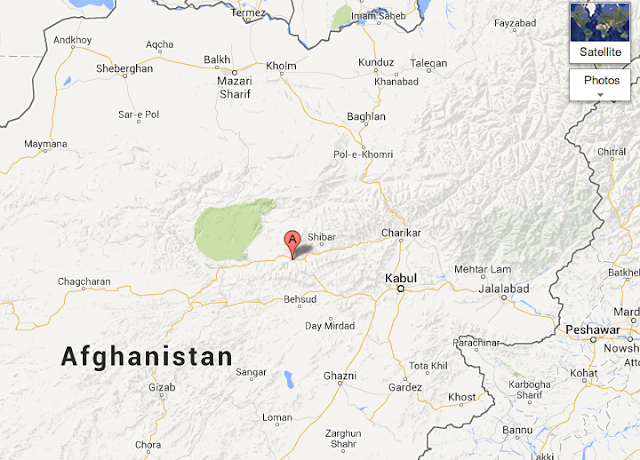 Varmayana…The word for color in Sanskrit is 'varNa' (वर्ण) and it actually signifies quality, one of them being color. It is also used for the letter of the alphabet (quality of sound), the alphabet being called varNa-mAlA (वर्ण-माला, letter-garland). Gold is called su-varNa (सुवर्ण, सु=good, beautiful; वर्ण=color, quality ).