King Harsha (reigned 607-647 C.E.) ……the last of the great Buddhist rulers of northern India before the triumph of Hinduism and the expansion of Islam.

"Harsha Vardhana….. (Sanskrit: हर्षवर्धन) (c. 590–647), commonly called Harsha, was an Indian emperor who ruled northern India from 606 to 647 from his capital Kannauj. He was the son of Prabhakara Vardhana and the younger brother of Rajya Vardhana, a king of Thanesar, Haryana. At the height of his power his kingdom spanned the Punjab, Rajasthan, Gujarat, Bengal, Odisha and the entire Indo-Gangetic plain north of the Narmada River…..After the downfall of the prior Gupta Empire in the middle of the 6th century, North India reverted to small republics and small monarchical states ruled by Gupta rulers. Harsha was a convert to Buddhism. He united the small republics from Punjab to central India, and their representatives crowned Harsha king at an assembly in April 606 giving him the title of Maharaja when he was merely 16 years old.Harsha belonged to the brahman, Kanojia caste." 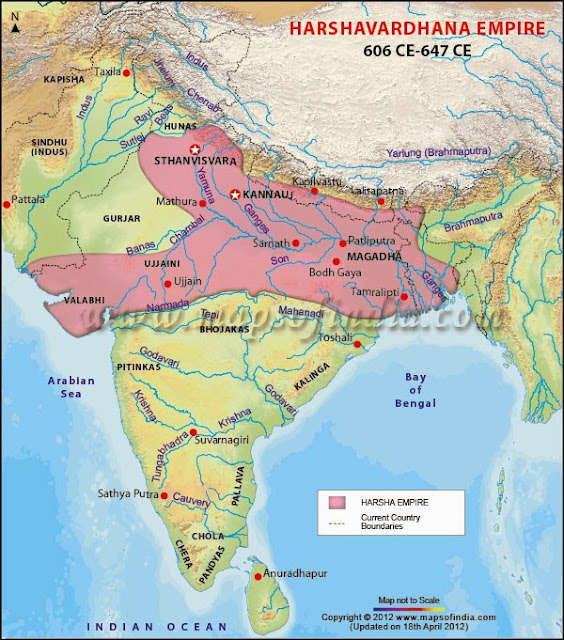 "….As he drew closer to the Buddhist Holy Land in the northeastern part of India, Xuanzang tells us more about Buddhist history and doctrines. He relates the famous legends or incidents from the life of the Buddha, as well as the many tales of the Buddha in previous incarnations. He also gives a history of the Great Buddhist Councils and locates the places associated with the famous philosophers such as Vasubandu and Arjuna, often citing their principal works. Like many another Chinese pilgrim who visited India, he was also interested in observing the practice of Buddhism outside China and so he reports on the number of monks and monasteries, the variety of sects, Buddhist festivals and the custom of Buddhist debates. Xuanzang is sure to tell us about the good works of kings who were patrons of Buddhism like King Asoka , King Kanishka or King Harsha (7th CE) …….http://www.mongolianculture.com/indomongolian.htm 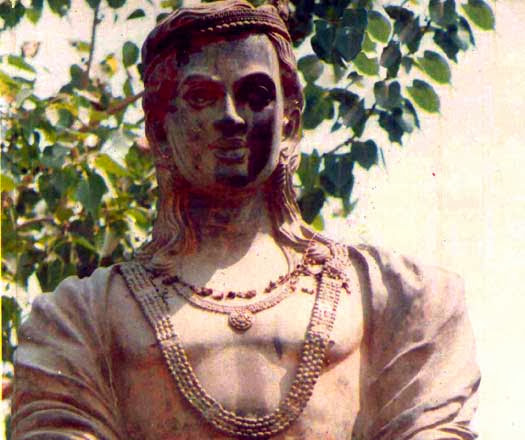 "King Harsha…..Toward the end of his stay, Xuanzang had the heady experience of being quarreled over by two kings -- the King of Assam and the illustrious King Harsha (reigned 607-647 C.E.) who was one of the last of the great Buddhist rulers before the triumph of Hinduism and the invasion of Islam. The year before he had finally met the pilgrim in 642 C.E., King Harsha had already established diplomatic relations with China. King Harsha was so impressed with the pilgrim that he staged a great debate to show off his skills. He invited the kings of 18 vassal kingdoms, 3,000 Buddhist monks, 2,000 Hindus and Jains to hear him proclaim the superiority of Mahayana Buddhism over Hindu and Jain beliefs as well as other kinds of Buddhism. It was a grand finale for his years in India….
When Xuanzang finally departed in 643 CE he was given a military escort to carry the books and images he had been collecting from the Indian subcontinent. King Harsha presented him with his best and biggest elephant capable of carrying eight men as well as the thousands of gold and silver pieces given him for expenses along the way. The king also provided him with letters to rulers on the homeward route. Only 4 years later this remarkable, versatile monarch was gone; for the next 3 centuries there would be disorder and famine in northern India. Spear, the modern historian,notes…. 'Beginning with the fall of the Guptas and becoming complete after the death of Harsha in 647 A.D., north Indian history is confused and obscure for some five or six hundred years. As the Dark Ages divide the classical age of the Greek and the Roman, so do these centuries divide modern from ancient India.[xvii]"….…….http://www.mongolianculture.com/indomongolian.htm

"Harsha, who was a Shaiva by faith, began celebration of religious festivals every five years, at the confluence of three rivers (the Ganga, the Yamuna, and the Saraswati) at Prayaga. It is said to be the beginning of the famous Kumbha Mela of India which still attracts lacs of devotees….Harsha was a tolerant ruler and supported all Indic faiths – Buddhism, Vedism and Jainism. Early in his life, he seems to have been a follower of Sun Worship, becoming a patron of Shaivism and Buddhism later on."….Drekmeier, Charles. 1962. Kingship and Community in Early India. nalanda University Press, Stanford, California. ISBN 0-8047-0114-8, p. 187

"Harsha was a noted author on his own merit. He wrote three Sanskrit plays – Nagananda, Ratnavali and Priyadarsika. His reign is comparatively well documented, thanks to his court poet Bana and Xuanzang…..Harsha's participation in the cultured life of his court was more direct than that of most kings, and it is in his personal contribution to Sanskrit literature that he clearly overshadows them. To him are assigned three plays: Priyadarsika, Ratnavali, and the Nagananda. In addition, he is credited with two significant poems on Buddhist themes - the Ashtamahasricaityastotra (Praise to Eight Grand Caityas [Buddhist assembly halls]) and Suprabhatastotra (Laud to Morning) - and a tract on grammatical gender, the Linganusasanam….Harsha combined Buddhist and "Hindu" themes adroitly and uniquely, and through it one sees clearly his artistic and political genius."

"Harsha died in the year 647. He ruled for 41 years. After Harsha's death, his empire died with him. The kingdom disintegrated rapidly into small states. The succeeding period is very obscure and badly documented, but it marks the culmination of a process that had begun with the invasion of the Huns in the last years of the Gupta Empire."

"Amsuvarman, whose name means " Shining Armor," is mentioned by Hiuen Tsiang as reigning about 637 A.D. In several inscriptions ranging from 635 to 640 it appears that he was of the Thakuri dynasty and a feudatory of the power­ful Buddhist king Harshavardhana of Kanauj. After the death of the latter he apparently became independent. He died in 639-640 A.D. and after his death the Tibetans succeeded in installing King Narendra-deva as his successor…..The first Thakurian king, Amsuvarman, helped to bridge Nepal's relationship with Tibet when his daughter married a Tibetan prince. The dowry he collected from this marriage added to his great wealth. Amsuvarman liked the location of the Kathmandu Valley, tucked away within the towering Himalaya, and he decided to have his palace there."….http://www.angelfire.com/ca2/shammons/nepalhist.html