MANENE...the mother lineage of Warrior Manene...."Manene means grandmother. More of a title than a deity. Dolma, the principle goddess in the Lamist pantheon. Tara of the Hindus. Gesar epic."(David-Neel: 1981 Secret Oral Teachings in Tibetan Buddhist Sects....pg 147)... 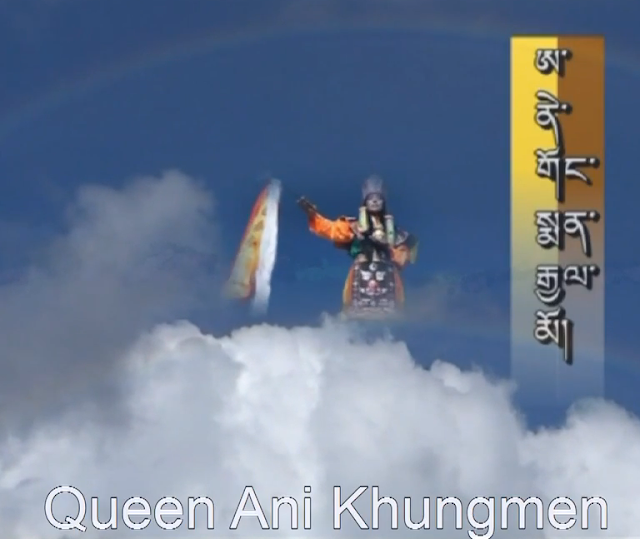 Manene, the spiritual guide of the King Gesar, descends from the rainbow and predicts to Gesar that the kingdom of the Ling will face the Cannibal-Demon from northern country Chang, who is the leader of all great demons of four directions….Queen Ani Khungmen: In Tibetan, the word ani also translates as aunt. 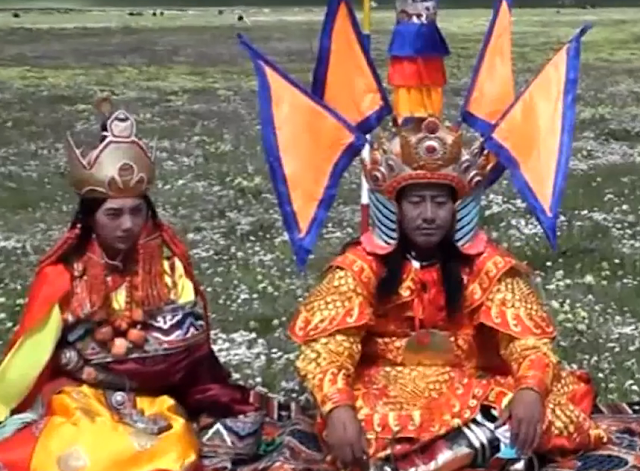 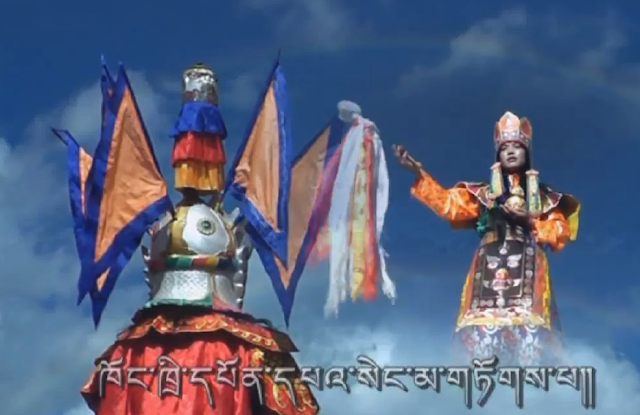 Manene, the spiritual guide of the King Gesar,... par Ling Lhamo…http://www.tibetjustice.com/manene-the-spiritual-guide-of-the-king-gesar Manene, the spiritual guide of the King Gesar, descends from the rainbow and predicts to Gesar that the kingdom of the Ling will face the Cannibal-Demon from northern country Chang, who is the leader of all great demons of four directions. Among heroes and yogis of all the Ling, only Tripon Paseng has the power to eliminate him. The war between Chang and Ling is however inevitable as the army of Chang will attack Ling. Tulku Tsultrim Namgyal is the director, script writer, designer and supervisor of this wonderful new film about Ling Gesar, made in Tibet, at Golok Gabde, on July 2012, with local actors, bard singers and dancers from "Nyen Ngak Drongtso", Ling Gesar's Epical Culture Village of Mayul. My Ling Gesar teacher, Tongnyi Dhontok Rinpoche, the President of Abroad Ling Gesar's Nyan Ngak Drongtso Association, had the great kindness to entrust me with the honour to present to you this masterpiece. To repay this kindness of Tulku Tongnyi Dhontok, I asked my professor of Tibetan language, Chung Tsering, to translate in English, and I slightly rewrite it and made subtitles. I also insured the direct communication between my translator, Chung Tsering, and the script writer, Tulku Tsultrim Namgyal. We were also helped several times by Tulku Tongnyi Dhontok, the official consultant for this film. So, soon, on Youtube with English subtitles. For instant, just the original :), for my professor, Chap Lha. http://www.youtube.com/watch?v=Jdl4jAn8pNU

Manene's prediction by Dakini Kunsang Lhamo….by Ling Lhamo …..Here is the first video on Ling Gesar with English subtitles. "Manene's prediction" is the first song of the new film "Great war between Chang and Ling" made in Tibet, Golok, last summer…http://www.youtube.com/watch?v=d03Nl5Ix0ck&feature=share&list=PLW7Yk3T_QVX3Ji-6VriTS7x1L0ZsaaLnJ&index=10

"Manene's Song to Her Brother, Gesar:
"Now, Gesar, Hero of a thousand battles,
Conqueror of a thousand kinds of corruption,
Healer of a thousand kinds of poisonous disease,
(http://www.poemhunter.com/poem/manene-s-song-to-her-brother-gesar/comments.asp)
This is one of several songs that the goddess, Manene sings to encourage Gesar of Ling. These verses come from CROSSING ON A BRIDGE OF LIGHT- by Douglas Penick ….Mountain Treasury Press. PP.15-16

"Gesar’s principle goddess and guide, Manene, as you know, is the the White Sky sman, gNam sman dkar mo, also known as Queen of the Sky sman (dGung sman rgyal mo)……What you say about such categories not requiring taming or management in the context of Bonpo Phurpa, to me indicates the absorption into Bonpo buddhism of the earlier frames of primordial dualism between the white side and the dark side, which works seamlessly as an expression of buddhist ideas without the necessity of ‘taming’ paradigms. In Gesar, his helpers – which include sman, gnyan, and all kinds of zoomorphic combat spirits such as dgra bla and wer ma) aren’t presented as ‘tamed’ or converted forces, but are just his forces – so they can be seen (and in gesar they are indeed pretty much presented as) , like you say, “direct emanations of the …enlightened..[hero/deity]“…..http://blogs.orient.ox.ac.uk/kila/2012/04/27/the-great-khu-tsha-zla-od/ 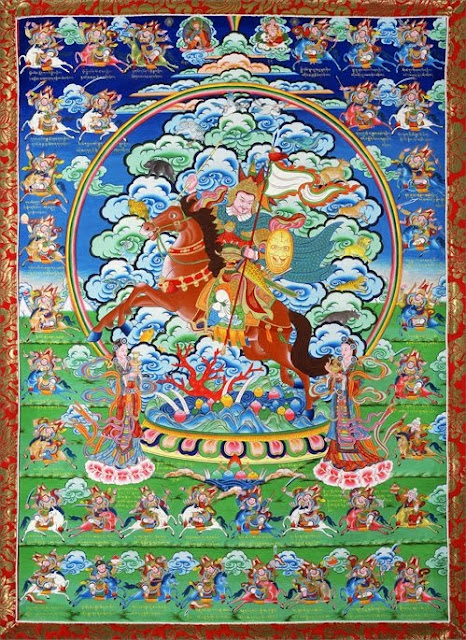 "Similarities with motifs in Turkic heroic poetry….."Chadwick and Zhirmunsky consider that the main outlines of the cycle as we have it in Mongolia, Tibet and Ladakh show an outline that conforms to the pattern of heroic poetry among the Turkic peoples. (a) Like the Kirghiz hero Bolot, Gesar, as part of an initiation descends as a boy into the underworld. (b) The gateway to the underworld is through a rocky hole or cave on a mountain summit. (c) He is guided through the otherworld by a female tutelary spirit (Manene/grandmother) who rides an animal, like the Turkish shamaness kara Chach. (d) Like kara Chach, Gesar's tutelary spirit helps him against a host of monstrous foes in the underworld. (e) Like Bolot, Gesar returns in triumph to the world, bearing the food of immortality and the water of life.(f) Like the Altai shamans, Gesar is borne heavenward on the back of a bird to obtain herbs to heal his people. They conclude that the stories of the Gesar cycle were well known in the territory of the Uyghur Khaganate."….Chadwick, Nora Kershaw; Zhirmunsky, Viktor (2010) [1968]. Oral Epics of Central Asia. Cambridge University Press. ISBN 978-0-521-14828-3. Retrieved 14 July 2011.

sgra bla……."sound soul", type of individual energy that is also endowed with a protective function, Drala, a class of divine manifestations….http://rywiki.tsadra.org/index.php/sgra_bla

"Namkhai Norbu Rinpoche elaborates on the traditional understanding and etymology of drala:…..In many ancient Bön texts the name 'Drala' is spelt sgra bla, which literally means 'la of sound', where la (soul or vitality) stands for a type of individual energy that is also endowed with a protective function…… In more recent texts, notably those of the Buddhist tradition, we find the spelling dgra lha, 'deity of the enemy', a term which has been interpreted to mean a warrior deity whose task is to fight one's enemies. [...] Other authors, interpreting the term in the sense of 'deity that conquers the enemy's la' have instead spelt it dgra bla, 'enemy's la'."…. Namkhai Norbu, Drung De'u and Bön, translated by Adriano Clemente, Library of Tibetan Works and Archives, 1995 pp.61-62

"The spelling sgra bla ('la of sound') found in the ancient texts as a matter of fact is based on a very deep principle characteristic of the most authentic Bön tradition. Sound, albeit not visible, can be perceived through the sense of hearing and used as a means of communication, and is in fact linked to the cha (the individual's positive force, the base of prosperity), wang tang (ascendancy-capacity), and all the other aspects of a person's energy, aspects that are directly related with the protective deities and entities that every person has from birth. Moreover, sound is considered the foremost connection between the individual himself and his la. From all this we can easily understand the deep meaning of the word sgra bla."… Namkhai Norbu, Drung De'u and Bön, translated by Adriano Clemente, Library of Tibetan Works and Archives, 1995 pp.61-62 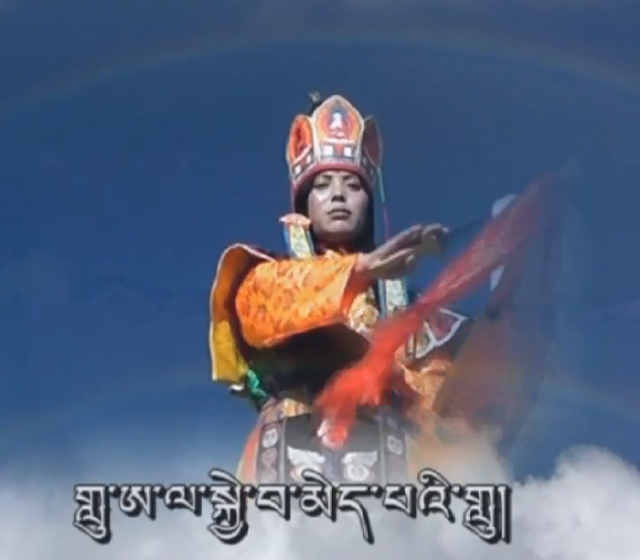 Not until the 35-minute mark, when the song of the goddess Manene ‘is heard only by Gesar’ (and so not by us), does a sequence of exquisitely written duets suggest how Lieberson’s undoubted talent might have been put to more persuasive use…..http://www.classical-music.com/review/lieberson

Buddhist Insight: Essays….By Alex Wayman… the meaning of the mirror held by Manene, the goddess of the Tibetan epic Gesar of Ling, who was continually making prophecies

Women, Myth, and the Feminine Principle…..By Bettina Liebowitz Knapp….Gesar's anima figure, the goddess Manene, appears to him amid rays of light. Her energy (she is a part of nature) flows directly into the man whose projection ...

Religion and Biography in China and Tibet…. By Benjamin Penny….He is protected by the female sky-goddess Manene. Machen Pomra and Manene are both defenders of Buddhism but also powerful folk-religion deities with ...