"The Five Pure Lights (Tibetan: 'od lnga) is an essential teaching in the Dzogchen tradition of Bön and Tibetan Buddhism. For the deluded, matter seems to appear. This is due to non-recognition of the five lights. Matter includes the mahābhūta or classical elements, namely: space, air, water, fire, earth. Knowledge (rigpa) is the absence of delusion regarding the display of the five lights...In the Bonpo Dzochen tradition, the Five Pure Lights are discussed in the Zhang Zhung Nyan Gyud and within this auspice two texts in particular go into detail on them as The Six Lamps (Tibetan: སྒྲོན་མ་དྲུག་, Wylie: sgron ma drug) and The Mirror of the Luminous Mind (Tibetan: འོད་གསལ་སེམས་ཀྱི་མེ་ལོང་, Wylie: 'od gsal sems kyi me long)..".....http://en.wikipedia.org/wiki/Five_Pure_Lights 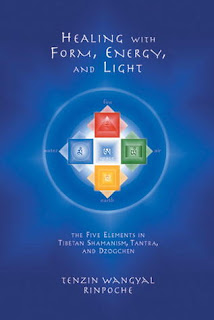 "Traditionally, prayer flags come in sets of five, one in each of five colors. The five colors represent the elements, and the Five Pure Lights and are arranged from left to right in specific order: blue, white, red, green, and then yellow. Different elements are associated with different colors for specific traditions, purposes and sadhana. Blue symbolizes sky/space, white symbolizes air/wind, red symbolizes fire, green symbolizes water, and yellow symbolizes earth. According to Traditional Tibetan medicine, health and harmony are produced through the balance of the five elements."......http://en.wikipedia.org/wiki/Prayer_flag

"The pure state of the mind, the base of Buddhahood, has a quality of clear light, which develops into the pure light of the natural state. This light is "rainbow light," not material light. It is the natural energy of the primordial state and the cause of samsara and nirvana. Through the movement of this pure light, which is the inner rigpa energy in the dimension of the primordial base, the five pure lights develop and begin to appear. This process is represented by the five-colored tigle that surrounds the white A and which symbolizes the primordial natural condition......The pure lights of the five colors constitute the second step in the production of existence; they are the source of the five elements that are the underlying structure of both the external existence of the world and the internal existence of the individual. In seeing these, we perceive the elements in their gross form, but in reality the source of the elements is the pure light of the natural state.
The energy of the five pure lights arises in the primordial base and creates and gives substance to internal and external reality. In the mandala of the human body, this clear light energy resides in the heart, rises through the channels, and is projected through the eyes. It is the basis of all vision and moves from the inner to the outer dimension. According to the traditional explanation, external existence is constituted by the world in its function of outer mandala or "container" of the individual. The internal existence of the self or individual is divided into internal, external, and secret. The external existence of the individual consists of the five sense objects perceived by the five sense consciousnesses. Internal existence is the sixth sense consciousness, the mind, together with proprioception or the inner consciousness of the body. Secret existence is the movement of thoughts. In the last analysis, the division of existence into internal and external is based on a false view formed by the conceptual mind regarding the dualistic condition. In the true condition there is no distinction between internal and external since the same empty space gives rise to internal and external existence alike, just as the air inside and outside a jar is the same.
The five lights can develop in two ways, depending on whether or not one is present in awareness in the primordial state. If there is understanding, the five pure lights give rise to the five pure visions, and wisdom begins to develop the pure body. In this way, the five pure lights give rise to the five pure elements, which give rise to the five internal elements, then successively to the five external elements, the five sense consciousnesses, the five sense organs, the five sense objects, the five bodies, and the five wisdoms. This process leads to nirvana or final, total realization. But if there is distraction and lack of understanding, the five pure lights become gross and start to transform into the five coarse elements, then successively into the five impure organs, five deluded sense consciousnesses, the five deluded sense organs and so on, finally giving rise to the five poisons or five passions, the five negative actions, and the illnesses derived from these. Each passion is connected with the light of a particular color and element. This is the process of continuous transmigration in samsara."......Tenzin Wangyal. Wonders Of The Natural Mind: The Essense Of Dzogchen In The Native Bon Tradition Of Tibet 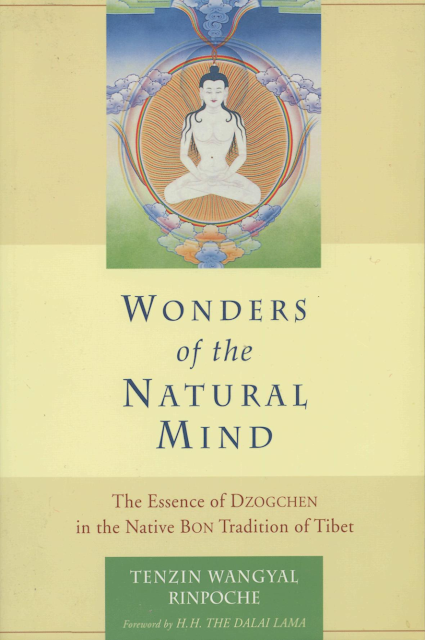