"The Bhojakas, who followed centuries later (600–700 C.E.), believed that they emanated from the body of their sun god. They also proclaimed themselves to be the descendants of Zarathustra. In India they created a mixed solar religion from the doctrines of the Avesta (the teachings of Zarathustra) and Mahayana Buddhism. From the Buddhists they adopted fasting and the prohibitions on cultivating fields and trade. In return, they influenced Buddhism primarily with their visions of light. Their “photisms” are said to have especially helped shape the shining figure of the Buddha Amitabha. Since they placed the time god, Zurvan, at the center of their cult, it could also be they who anticipated the essential doctrines of the Kalachakra Tantra.....Like the Kalachakra deity we have described, the Iranian Zurvan carries the entire universe in his mystic body: the sun, moon, and stars. The various divisions of time such as hours, days, and months dwell in him as personified beings. He is the ruler of eternal and of historical time. White light and the colors of the rainbow burst out of him. His worshippers pray to him as “father-mother”. Sometimes he is portrayed as having four heads like the Buddhist time god. He governs as the “father of fire” or as the “victory fire”. Through him, fire and time are equated. He is also cyclical time, in which the world is swallowed by flames so as to arise anew."....http://www.american-buddha.com/aggres.myth.htm

"Maga is the term applied to Zoroastrian/Mazdayasti priests. Balkh in Bactria (Afghanistan) was a major center of Zoroastrianism. Śākadvīp corresponds to regions of Afghanistan beyond the Hindukush mountains......The 8 Mandaga kulas were married to Śaka (Saka, who were eastern Scythians, distinct from African Shaka) and their descendants were not called Mandaga, and were considered to be Śūdras.....served as the priests of the Sun god (Surya, Mitra in Sanskrit, Mithra in Avestan). Sanskrit word mihir is related to Sun and one Śākadvīpī gotra name is mihirāsu, which points to Persian connections (Mihr in Persian). The Iranian Surya (sun god) wearing a long coat with a sacred girdle and knee-high boots was worshipped by Indian kings. He had a special name Mundira svami and the word Mundira is found in ancient Iranian texts from Khotan. The Sun Temple of Modhera in Gujarat and Munirka village in Delhi remind of the name Mundira. The Sun God at Konark Sun Temple, Konark, Orissa is famous in his Iranian drapery and boots. The royal priests of this royal surya were of Iranian descent like Sakadvipiya Brahmanas.....

"Shudra is the fourth varna, as prescribed in the Purusha Sukta of the Rig veda, one of the sacred texts of Hinduism. This text defines society as comprising four groups, sometimes also called chaturvarna, of which the other three are Brahmins (priests), Kshatriya (those with governing functions) and Vaishya (agriculturalists, cattle rearers and traders). According to this ancient text, the Shudra perform functions of serving the other three varna."

"The Śākadvīpīya Brahman community of India identify themselves as having Iranian roots......Śākadvīpīya Brahmans or Bhojaka Brahmans, is a class of Hindu priests and Ayurveda teachers (acharyas) and practitioners,with significant concentrations of their populations occurring in Western and Northern India. Spelling variants of "Śākadvīpīya" include Shakdvipi, Shakdwipi, Shakdweepi, Shakdvipiya, Shakdwipiya, Shakdweepiya, Shakadwipi, Śākadvīpīya, and Sakadwipi. The Śākadvīpīyas are also known as Maga Brahmans (or sometimes Mragha) . Historically, Maga Brahmans are Sūryadhvaja ("white flag") Brahmans, who nevertheless today consider themselves to be distinct from the Śākadvīpīya or Bhojaka Brahmans.....the Śākadvīpīya are one of only two Brahman groups who are said to have originated outside India.... the Shakdwipi Brahamins do in fact appear to have been instrumental in the construction of Sun temples in different part of the country".....https://en.wikipedia.org/wiki/Śākadvīpīya

"The reference to the inhabitants of Śakadvīpa is, however, older than the Purāṇas, appearing first in Rigveda and subsequently in almost all veda & Mahabharata 6:11, where Sakadwipa is said to lie to the north-west (of ancient India). The region is mentioned again in 12:14 as a region to the east of the great Mount Meru. Consequently, the word 'Śākadvīpīya' (and variations) is presumed to reflect Śaka-, the people of a region beyond the Hindukush mountains.".....https://en.wikipedia.org/wiki/Śākadvīpīya#cite_note-5

"Bhojakas are mentioned in the inscriptions of Maurya Ashoka and Kharavela. Kadamba Dynasty copperplates found in Karnataka mention Bhojakas as manages of Jain institutions."

Shakadwipi......"Their entrance into India goes back to the time of Mahabharata. A section of Iranian priestly class, called Magi who entered into India, as Magi- Dias or Magi Brahmanas. Magus is the singular for magi..... Herodotus (Greek historian, 485-425 BC). He cites them as one of the five social classes of the Medes. Probably they were similar to medicine men or shamans who were among the earliest of peoples, and somewhat paralleled to the India Brahmins in their early period.In his times, Herodotus notes, the magi had become Zoroastrian priests. He mentioned a band of aboriginal shamans who were captured by Aryans. The shamans not only learned their captors' religion but also became priests in it.....Their domination or authority seemed to have extended beyond Persia throughout the entire Mediterranean area......evidences suggest that Sakaldwipi or shakadwipi Brahmins were originally from shakadweep which was in central Asia. They were also known as Maga Brahmins. The Magas are members of the Aryan race; they were Aryan Sun-worshippers of Surya, representative of the forces of Light and Day. The Maga Brahmins produced much of the later Brahmanic civilization.".....http://en.wikipedia.org/wiki/Sakaldwipiya_history

"The origin of the worship of the Sun in India is several centuries old. Sakaldwipi (Shakdwipi) or Maga Brahmins are pioneers in Sun worship and Ayurvedic medical system. Varahmihir the famous ancient astrologist was a Sakaldwipi Brahmin. Chanakya brain behind the Mauryan empire was Sun Priest or Maga Brahmin. The vedic scriptures of the Hindu religion refer to the Sun as the store house of inexhaustible power and radiance. The sun god is referred to as Surya or Aditya. The Vedas are full Of hymns describing the celestial body as the source and sustainer of all life on Earth."....http://en.wikipedia.org/wiki/Sakaldwipiya_history

" the jain temple priests are often bhojakas, a special kind of Brahmins, who have been worshipping in jain temples for many centuries. the history of bhojakas there is closely connected with that of the shravakas.".....http://en.wikipedia.org/wiki/Sakaldwipiya_history

"... they are descendants of the maga priests who came to the Indian plains from shakadwipa. Several of the Brahmin communities in India are maga/bhojaka origin. one of their specializations was the worship of sun ("mihira"). some Brahmins in gaya region in bihar still call themselves shakadwipi. The Sanskrit poet magh and the mathematician varahamihira were shakdwipi or bhojak.".....http://en.wikipedia.org/wiki/Sakaldwipiya_history 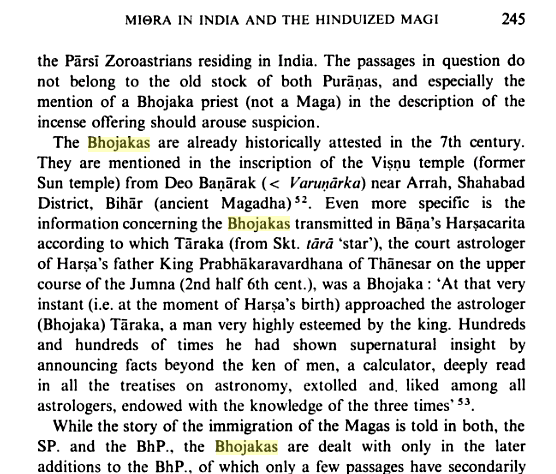