Bodhidharma was a Buddhist monk who lived during the 5th/6th century AD. He is traditionally credited as the transmitter of Ch'an (Sanskrit: Dhyāna, Japanese: Zen) to China, and regarded as its first Chinese patriarch....... the Japanese tradition regards Bodhidharma to be from Persia......(Masato Tojo, Zen Buddhism and Persian Culture).....Bodhidharma was primarily active in the lands of the Northern Wèi Dynasty (386–534). ....He is referred as "The Blue-Eyed Barbarian" (碧眼胡) in Chinese Chan texts......The earliest text mentioned Bodhidharma is The Record of the Buddhist Monasteries of Luoyang (洛陽伽藍記 Luòyáng Qiélánjì) which is compiled in 547 by Yáng Xuànzhī (Yang-Hsuan-chih 楊衒之), a writer and translator of Mahāyāna Buddhist texts into the Chinese language. Yang gave the following account: 'At that time there was a monk of the Western Region named Bodhidharma, a Persian Central Asian. "......http://en.wikipedia.org/wiki/Bodhidharma 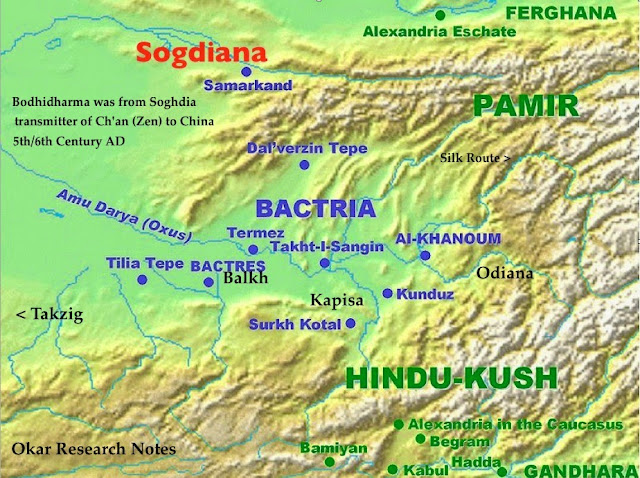 "Bodhidharma and The Zoroastrian Origin of Zen (Chan) Philosophy Bodhidharma was clearly a Persian Zoroastrian trader, possibly a Mitharist of sorts. From Soghdia, a Persian kingdom in Central Asia (current Uzbekistan) with extensive trade connections to China. Zen as Persian and not Chinese or Japanese philosophy."....Jeffrey L. Broughton (1999): The Bodhidharma Anthology: The Earliest Records of Zen (Berkeley: University of California Press) .....Broughton notes that Bodhidharma was a Persian from Central Asia. ......This paper investigates the relationships between Mithraism, Persian culture, Zen and Mahayana Buddhism

"Bodhidharma is said to be a blue-eyed Persian 碧眼胡僧(Hekigan-kosō) in Zen tradition. “Blue-eyed Persian” means Hellenized Persian, and/or a Persian who has much knowledge about western culture. Mithra’s magi are such Persians."......http://www.kavehfarrokh.com/wp-content/uploads/2010/04/zen_buddhism_and_persian_culture_v1.pdf

"Zen is traditionally credited to be established at the Šaolin temple 少林寺in China by a Persian wandering monk Bodhidharma. He came to China to teach a "special teaching not-written in the scriptures". The reason was that the teaching is so subtle that it is impossible to transmit it by the words.......Zen is thought to have developed as an amalgam of various currents in Mahāyāna Buddhist thoughts—among them the Vijnāna-vādin 唯識* Mādhyamaka 中観philosophies and the Prajñāpāramitā 波羅蜜多literature—and of several traditions in China, particularly Taoism and preceding Mahāyāna Buddhism sect Kegon-šū 華厳宗(Ch: Huáyán-zōng). The first document which mentioned Zen as a distinct school of Buddhism was written in 7th Century. From China Zen subsequently spread south to Vietnam, and east to Korea and Japan."......http://www.kavehfarrokh.com/wp-content/uploads/2010/04/zen_buddhism_and_persian_culture_v1.pdf