Xi Wangmu (Hsi Wang-mu; Chinese: 西王母; pinyin: Xī Wángmǔ; literally "Queen Mother of the West") is a Chinese goddess known from the ancient times. The first historical information on her can be traced back to oracle bone inscriptions of the fifteenth century BCE Shang Dynasty (1766-1122 B.C.).....she predates organized Taoism....she was the dispenser of prosperity, longevity, and eternal bliss took place during the second century BCE when the northern and western parts of China were able to be better known because of the opening of the Silk Routes......Western Mother refers to an archaic divinity residing in the west.....Taoist writer Zhuangzi (c. fourth century BC) describes the Queen Mother as one of the highest of the deities.....Her mythology was recorded in the poems of the Quan Tangshi, the premier collection of Tang poetry......The Queen Mother of the West usually is depicted holding court within her palace on the mythological Mount Kunlun...(E. T. C. Werner identifies Kunlun with the Hindu Kush mountain range.)....her garden had a special orchard of longevity peaches..... Kunlun was pictured as a Daoist paradise, inhabited by xian, or Daoist immortals (humans who had metamorphosed into superhuman form), which was presided over by Xi Wangmu. The xian were often seen as temporary residents, who visited by means of flying on the back of a magical crane or dragon."....http://en.wikipedia.org/wiki/Kunlun_Mountain_(mythology) 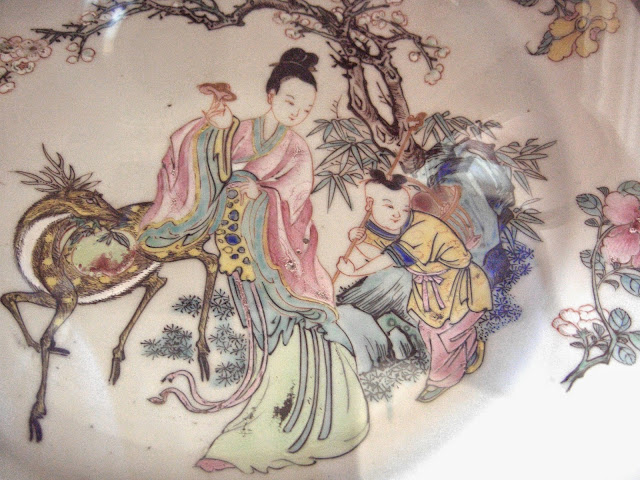 "For Tibetan Buddhists, the Kunlun region is the site of Shambhala...."

"The name of the goddess is usually translated as Queen Mother of the West. Mu means “mother,” and Wang, “sovereign.” But Wangmu was not a title for royal women. It means “grandmother,” as in the Book of Changes, Hexagram 35: “One receives these boon blessings from one’s wangmu.” The classical glossary Erya says that wangmu was used as an honorific for female ancestors. [Goldin, 83] The ancient commentator Guo Pu explained that “one adds wang in order to honor them.” Another gloss says it was used to mean “great.” Paul Goldin points out that the Chinese commonly used wang “to denote spirits of any kind,” and numinous power. He makes a convincing case for translating the name of the goddess as “Spirit-Mother of the West.” [Goldin, 83-85]....http://www.suppressedhistories.net/goddess/xiwangmu.html

".....She wears the sheng headdress shown in the earliest reliefs of the goddess....The sheng is usually interpreted as a symbol of the loom. The medieval Di Wang Shih Zhi connects it to “a loom mechanism” the goddess holds. Cahill says that the sheng marks Xi Wangmu as a cosmic weaver who creates and maintains the universe.".....See: Spider Woman, the Cosmic Weaver in Navajo Creation Story)......

Double Seven festival in which women’s weaving figured prominently. It was celebrated on the seventh day of the seventh month, at the seventh hour, when Xi Wangmu descended among humans. Taoists considered it the most important night of the year.....when the divine and human worlds touch.... 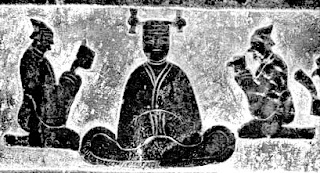 An 18th-century woodcut depicts the goddess in her old shamanic form, with tiger’s teeth and bamboo staff, sitting on a mountaintop with various chimeric animals.....She is depicted as a tigress, an animal connected to shamans in China and over much of Asia......

"Jade Maidens appear as long-sleeved dancers in the shamanic Songs of Chu and some Han poems. The Shuo wen jie zi defines them as “invocators [zhu] …women who can perform services to the shapeless and make the spirits come down by dancing.” [Rawson, 427] Centuries later, a Qing dynasty painting shows a woman dancing before Xi Wang Mu and her court, moving vigorously and whirling her long sleeves. [Schipper, 2000: 36] Chinese art is full of these ecstatic dancing women......Tang poets describe Xi Wangmu herself performing such dances in her rainbow dress and feathered robe with its winged sleeves. In The Declarations of the Realized Ones she dances while singing about the Great Wellspring; the Lady of the Three Primordials replies in kind. [Cahill, 165-6, 187]"......http://www.suppressedhistories.net/goddess/xiwangmu.html

The Pamir Mountains are a mountain range in Central Asia formed by the junction or knot of the Himalayas, Tian Shan, Karakoram, Kunlun, and Hindu Kush ranges. They are among the world’s highest mountains, and since Victorian times, they have been known as the "Roof of the World", presumably a translation from the Persian.....

"The Kun Lun Mountains hold a very important place in Chinese mythology, since it is in this range that the Immortals are believed to live, ruled by Hsi Wang Mu, the Queen Mother of the West. Hsi Wang Mu, who is also called Kuan Yin, the goddess of mercy, is said to live in a nine-storeyed palace of jade....In the seventeenth century, two Jesuit missionaries, Stephen Cacella and John Cabral, recorded the existence of Chang Shambhala, (means Northern Shambhala, which differentiates the abode of the spiritual adepts from the town called Shamballa,..)....Csoma de Koros, who lived for four years from 1827-30 in a Buddhist monastery in Tibet, claimed that Chang Shambhala lay between 45° and 50° north latitude, beyond the river Syr Daria....."....http://www.bibliotecapleyades.net/sociopolitica/sociopol_buddhism01.htm 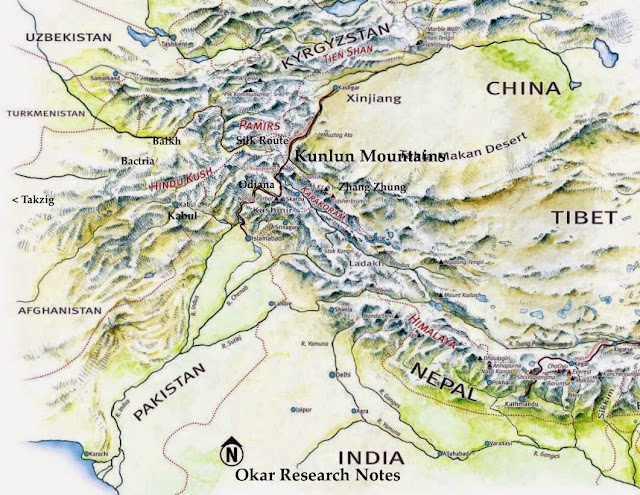