Hierophant: combination of ta hiera, "the holy," and phainein, "to show."

"A hierophant is an interpreter of sacred mysteries and arcane principles.....A hierophant is a person who brings religious congregants into the presence of that which is deemed holy. The word comes from Ancient Greece.... In Attica it was the title of the chief priest at the Eleusinian Mysteries....Attica is a historical region that encompasses the city of Athens, the capital of Greece."....http://en.wikipedia.org/wiki/Hierophant

Patriarch (Gr. patriarches; Latin patriarcha) means the father or chief of a race (patria, a clan or family). The word occurs in the Septuagint (The first translation of the Hebrew Old Testament, made into popular Greek before the Christian era.) for the chiefs of the tribes

"PATRIARCHS OF THE NORTHERN BUDDHISTS......After the death of Shakyamuni, a series of thirty-three patriarchs, superintended in succession the affairs of the religious community he had founded....... A patriarch is represented as one who does not look at evil and dislike it; nor does he, when he sees that which is good, make a strong effort to attain it. He does not put wisdom aside and approach folly; nor does he fling away delusion and aim at comprehending truth. Yet he has an acquaintance with great truths which is beyond being measured, and he penetrates into Buddha's mind to a depth that cannot be fathomed. His lodging is not with the sage, nor with the common class. Because he is above every one else in his attainments, he is called a patriarch......A patriarch has magical powers. He can fly through the air, cross rivers on a boat of leaves, rain milk at will from the air, and enter into a very great variety of trances or samadhi......http://www.sacred-texts.com/bud/cbu/cbu10.htm

"Buddha, before his death, committed the secret of his mysteries to his disciple, Maha Kashiapa. To him was intrusted the deposit of esoteric doctrine, called Cheng fa-yen-tsang, "the pure secret of the eye of right doctrine." The symbol of this esoteric principle, communicated orally without books, is man or wan.... In Sanscrit it is called svastika. It was the monogram of Vishnu and Shiva, the battle-axe of Thor in Scandinavian inscriptions, an ornament on the crowns of the Bonpa deities in Thibet"......http://www.sacred-texts.com/bud/cbu/cbu10.htm

".. the development of Tantra in later Buddhism laid great importance on the guru or tantric hierophant (vajrdedrya)...... or patriarch (roshi). "......Historia Religionum: Religions of the Present, Volume 2....By Geo Widengren

"The title pontifex comes from the Latin for "bridge builder"...between heaven and earth or between the spiritual world and the temporal one, a possible allusion to a very early role in placating the gods and spirits associated with the Tiber River....The College of Pontiffs was a body of the ancient Roman state whose members were the highest-ranking priests of the state religion......The flamens were priests in charge of fifteen official cults of Roman religion, each assigned to a particular god. The three major flamens (flamines maiores) were the Flamen Dialis, the high priest of Jupiter; the Flamen Martialis, who cultivated Mars; and the Flamen Quirinalis, devoted to Quirinus. The deities cultivated by the twelve flamines minores were Carmenta, Ceres, Falacer, Flora, Furrina, Palatua, Pomona, Portunes, Volcanus (Vulcan), Volturnus, and two whose names are lost. The Vestal Virgins were the only female members of the college. They were in charge of guarding Rome's sacred hearth, keeping the flame burning inside the Temple of Vesta. Around age 6 to 10, girls were chosen for this position and were obligated to perform the rites and obligations, including remaining chaste, for 30 years... the college of pontiffs’ duties involved advising the senate on issues pertaining to the gods, the supervision of the calendar and thus the supervision of ceremonies with their specific rituals.".....http://en.wikipedia.org/wiki/Pontifex

"A mystagogue (from Greek: μυσταγωγός "person who initiates into mysteries") is a person who initiates others into mystic beliefs, an educator or person who has knowledge of the Sacred Mysteries. Another word is Hierophant. In ancient mystery religions, a mystagogue would be responsible for leading an initiate into the secret teachings and rituals of the cultus. The initiate would often be blindfolded, and the mystagogue would literally "guide" him into the sacred space.... the mystagogue as part magician, part prophet"......http://en.wikipedia.org/wiki/Mystagogue 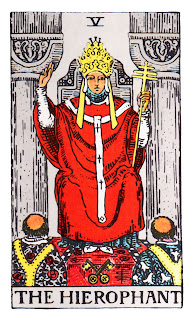 "The Hierophant, in some decks named The Pope, is the fifth trump or Major Arcana card in most traditional Tarot decks. It is used in game playing as well as in divination...... the origins of the Tarot? Decks have been created by a wide variety of people for a wide variety of reasons, but based on the archaeological record it appears that the custom of playing and gambling with cards arrived from the east but was modified to suit Western sensibilities after its arrival. The creator of the Tarot, who almost certainly lived in Italy in the 14th century, saw these modified cards and combined them with a group of trump cards, which together represented his or her cosmology."......http://queenoftarot.com/history/

"THE LAST HIEROPHANT AT ELEUSIS.....the citizen of Thespiae made hierophant, he who was a pater in the ritual of Mithras....It was the time when Alaric with his barbarians invaded Greece by the Pass of Thermopylae [A. D. 395]....Eunapius Lives of the Philosophers 475-476:.....http://www.csun.edu/~hcfll004/hierophant.html