"The Warka Vase is a carved alabaster stone vessel found in the temple complex of the Sumerian goddess Inanna in the ruins of the ancient city of Uruk, located in the modern Al Muthanna Governorate, in southern Iraq. Like the Narmer Palette from Egypt, it is one of the earliest surviving works of narrative relief sculpture, dated to c. 3200–3000 BC.".....Kleiner, Fred S.; Mamiya, Christin J. (2006). Gardner's Art Through the Ages: The Western Perspective 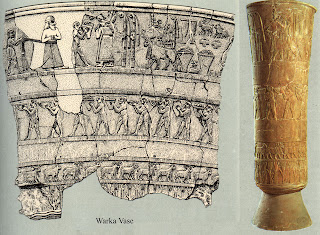 ...."the people of Sumer in an Inanna poem. An interesting bas-relief work is the Warka Vase. The Warka Vase is an ancient urn carved of stone that features bas-relief. The urn depicts various levels of the Sumerian world, in other words, the Sumerian hierarchy. Toward the bottom of the vase, are grains. Above that sheep, and then humans working in a field. At the very top of the vase is the goddess we all know as Inanna. Inanna is the largest figure on the vase. On the bottom register we see the Tigris and Euphrates rivers. This image probably symbolizes the honor the people gave to the rivers for providing water and fertile soil to grow plants. The middle register shows a group of males carrying what looks to be fruit and grains. On the top register, Inanna is shown being offered a bowl of fruit by a male figure. The vase shows the sacrifice the people are willing to bestow upon their goddess. The offerings being depicted on the Warka Vase are most likely linked to the Sacred Marriage.... The constant reference to Inanna displays the importance of her presence during this time. I think it is important to mention that the figures on the vase, not including Inanna were nude. Nudity, in Mesopotamian and other ancient art works is an interpretation of destitution or fragileness, however in the Warka Vase, the nude figures are displayed differently. The nudity depicted on the Warka Vase leans more toward the idea of beauty of the human body, which leads us to the Greek depictions of the nude figure. The Warka Vase was discovered in Inanna’s temple located in Southern Iraq. It is what we would consider a narrative relief sculpture. The vase shows the sacrifice and assurance of fertility and abundance. The importance of the rituals presented on this vase, are verified by it’s narrative."....http://honr201spring2013.blogspot.com/2013/01/bas-relief-sculpture.html 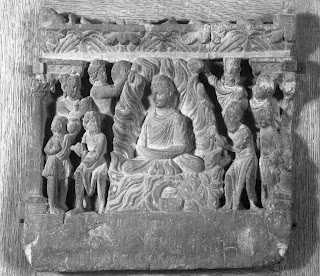