Canyon de Chelly is located in northeastern Arizona within the boundaries of the Navajo Nation. Reflecting one of the longest continuously inhabited landscapes of North America, it preserves ruins of the early indigenous tribes that lived in the area, including the Ancient Pueblo Peoples (also called Anasazi) and Navajo.......The name chelly (or Chelley) is a Spanish borrowing of the Navajo word Tséyiʼ, which means "canyon" (literally "inside the rock"). 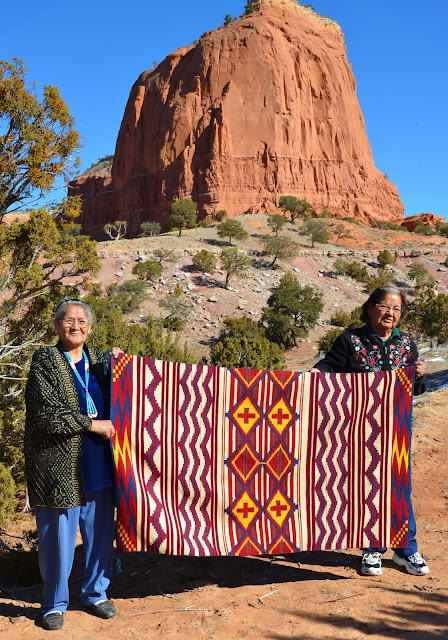 Navajo Serape with Spider Woman Hole......Woven by Lucie Marianito... "Many a Navajo grandmother will tell you that crosses represent Spider Woman. The symbol of Spider Woman was given to the earliest weavers to remember her teachings and wisdom. For some weavers, placing the symbol of Spider Woman (crosses) within a graphic form of a diamond, triangle or square was risky business. Spider Woman was not of this world and her spirit should not be entrapped within the form. Therefore in some Navajo weavings, the cross will have an actual hole or sometimes a graphic hole in the cross.".....http://www.canyonroadarts.com

Canyon de Chelly is entirely owned by the Navajo Tribal Trust of the Navajo Nation. It is the only National Park Service unit that is owned and cooperatively managed in this manner. Approximately 40 Navajo families live in the park in a traditional manner. Access to the canyon is restricted, and visitors are allowed to travel in the canyons only when accompanied by an authorized Navajo guide.

"The earth has a lot of facets, a lot of gods and warrior gods are still present. They can still be invoked. The deities and worship sites of the Native Americans have always been kept secret. Even with the complete desecration of America these Gods have not been destroyed. We can still visit these sacred sites and perform the appropriate ceremonies, just appreciating what is natural...Naturalism." 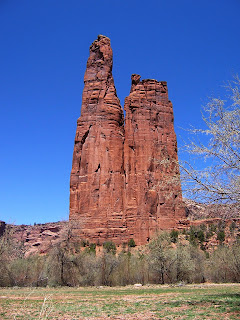 " Spider Rock can be seen from South Rim Drive. According to traditional beliefs the taller of the two spires is the home of Spider Woman, creator of the world in Southwestern Native American religions and myths such as that of the Hopi, Pueblo and Navajo peoples. According to mythology, she was responsible for the stars in the sky, she took a web she had spun, laced it with dew, threw it into the sky and the dew became the stars....Spider Woman taught ancient people how to weave the fibers of plants so they would not have to depend on animal skins for clothing...... 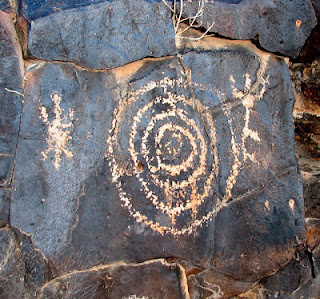 "Spider Woman instructed the Navajo women how to weave on a loom which Spider Man told them how to make. The crosspoles were made of sky and earth cords, the warp sticks of sun rays, the healds of rock crystal and sheet lightning. The batten was a sun halo, white shell made the comb. There were four spindles: one a stick of zigzag lightning with a whorl of cannel coal; one a stick of flash lightning with a whorl of turquoise; a third had a stick of sheet lightning with a whorl of abalone; a rain streamer formed the stick of the fourth, and its whorl was white shell....Spider Woman makes human arteries, and is thus considered to be a medicine woman. Her spiritual power, as seen in her silken web, joins the realms of Earth and Sky.".....http://www.twinrocks.com/legends/58-spider-woman.html

"Spider Woman, in some Navajo legends, is a Kisani (Pueblo) woman who was taught the craft by a spider. In acknowledgement of their debt to Spider Woman, one of the Holy People of Navajo mythology, Navajo weavers always left a hole in the center of each blanket, like that of a spider's web, until the traders in the early part of this century refused to buy such blankets. Most Navajo weavers still acknowledge the debt by leaving a "spirit outlet" in the design. The spirit outlet usually takes the form of a thin line made from the center of the blanket to the edge,".....Pg. 34.....The Book of the Navajo; 1976, Raymond Friday Locke. 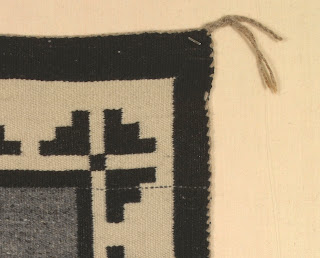 "The Navajo weaver’s pathway, or the ch’ihónít’i, a purposeful line woven into many Navajo textiles. Pathways, also called spiritlines, contain layers of significance and meaning in contemporary Navajo life."...https://scholarworks.iu.edu/journals/index.php/mar/article/view/1033/2037

" The world at first was endless space in which existed only the Creator, Taiowa. This world had no time, no shape, and no life, except in the mind of the Creator. Eventually the infinite creator created the finite in Sotuknang, whom he called his nephew and whom he created as his agent to establish nine universes. Sotuknang gathered together matter from the endless space to make the nine solid worlds. Then the Creator instructed him to gather together the waters from the endless space and place them on these worlds to make land and sea. When Sotuknang had done that, the Creator instructed him to gather together air to make winds and breezes on these worlds......The fourth act of creation with which the Creator charged Sotuknang was the creation of life. Sotuknang went to the world that was to first host life and there he created Spider Woman, and he gave her the power to create life. First Spider Woman took some earth and mixed it with saliva to make two beings. Over them she sang the Creation Song, and they came to life. She instructed one of them, Poqanghoya, to go across the earth and solidify it. She instructed the other, Palongawhoya, to send out sound to resonate through the earth, so that the earth vibrated with the energy of the Creator. Poqanghoya and Palongawhoya were despatched to the poles of the earth to keep it rotating.....Then Spider Woman made all the plants, the flowers, the bushes, and the trees. Likewise she made the birds and animals, again using earth and singing the Creation Song. When all this was done, she made human beings, using yellow, red, white, and black earth mixed with her saliva. Singing the Creation Song, she made four men, and then in her own form she made four women. At first they had a soft spot in their foreheads, and although it solidified, it left a space through which they could hear the voice of Sotuknang and their Creator. Because these people could not speak, Spider Woman called on Sotuknang, who gave them four languages. His only instructions were for them to respect their Creator and to live in harmony with him.".....http://www.gly.uga.edu/