"An example of a simple ziggurat is the White Temple of Uruk, in ancient Sumer. The ziggurat itself is the base on which the White Temple is set. Its purpose is to get the temple closer to the heavens.....The Mesopotamians believed that these pyramid temples connected heaven and earth. In fact, the ziggurat at Babylon was known as Etemenankia or "House of the Platform between Heaven and Earth".....https://en.wikipedia.org/wiki/Ziggurat 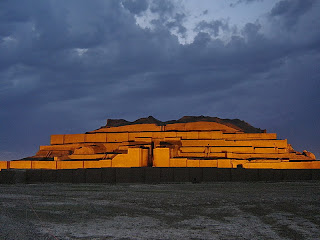 "Chogha Zanbil (Persian: چغازنبيل‎); Elamite: Dur Untash) is an ancient Elamite complex in the Khuzestan province of Iran. ......Choga Zambil means 'basket mound.' It was built about 1250 BC by the king Untash-Napirisha, mainly to honor the great god Inshushinak. Its original name was Dur Untash, which means 'town of Untash', but it is unlikely that many people, besides priests and servants, ever lived there. The complex is protected by three concentric walls which define the main areas of the 'town'. The inner area is wholly taken up with a great ziggurat dedicated to the main god, which was built over an earlier square temple with storage rooms also built by Untash-Napirisha. The middle area holds eleven temples for lesser gods. It is believed that twenty-two temples were originally planned, but the king died before they could be finished, and his successors discontinued the building work"......http://en.wikipedia.org/wiki/Chogha_Zanbil 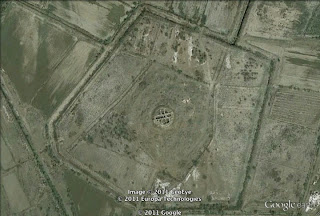 "Koi Krylgan Kala (Russian: Кой-Крылган-Кала; Uzbek:??) is an archaeological site, located outside the village of Taza-Kel'timinar in the Ellikqal'a District in the Republic of Karakalpakstan, an autonomous republic of Uzbekistan. In ancient times it was sited along a canal in the Oxus delta region. There is some relationship between and Koi Krylgan Kala and Toprak Kala, 30 km to the northwest. It is a temple complex of the Chorasmian Dynasty, an Iranian people who ruled the area of Khwarezm. It was built c. 400 BCE. The Apa-Saka tribe destroyed it c. 200 BCE, but later it was rebuilt into a settlement, which lasted until c. 400 CE. It was discovered in 1938 by Sergey Pavlovitch Tolstov, leader of the Chorasmian Archaeological-Ethnological Expedition. It contained a Mazdian fire temple, and was decorated with frescos of wine consumption.".....http://en.wikipedia.org/wiki/Koi_Krylgan_Kala

" In the 5th century BC, Herodotus wrote of Ecbatana:.....The Medes built the city now called Ecbatana, the walls of which are of great size and strength, rising in circles one within the other. The plan of the place is, that each of the walls should out-top the one beyond it by the battlements. The nature of the ground, which is a gentle hill, favors this arrangements in some degree but it is mainly effected by art. The number of the circles is seven, the royal palace and the treasuries standing within the last. The circuit of the outer wall is very nearly the same with that of Athens. On this wall the battlements are white, of the next black, of the third scarlet, of the fourth blue, the fifth orange; all these colors with paint. The last two have their battlements coated respectively with silver and gold. All these fortifications Deioces had caused to be raised for himself and his own palace."......http://en.wikipedia.org/wiki/Ecbatana 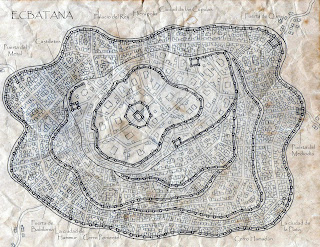 "In an earlier study devoted to the development of the stupa in relation to Borobudur (Stutterheim, 1929b:21— 27), he described the prototype Gandhara stupa as a fusion of the Indian stupa and the Babylonian ziggurat." ....http://books.google.com/books?id=7cd2Ha7fT90C&pg=PA8&dq=stupa+ziggurat&hl=en&sa=X&ei=wIZ2Uf75OIa9qQGz2YCoCQ&ved=0CDgQ6AEwAQ#v=onepage&q=stupa%20ziggurat&f=false

"The axis mundi (also cosmic axis, world axis, world pillar, columna cerului, center of the world), in religion or mythology, is the world center or the connection between Heaven and Earth.....High mountains are typically regarded as sacred by peoples living near them. Shrines are often erected at the summit or base. Japan's highest mountain, Mount Fuji, has long symbolized the world axis in Japanese culture. Mount Kun-Lun fills a similar role in China. For the ancient Hebrews Mount Zion expressed the symbol.Sioux beliefs take the Black Hills as the axis mundi. Mount Kailash is holy to Hinduism and several religions in Tibet. The Pitjantjatjara people in central Australia consider Uluru to be central to both their world and culture. In ancient Mesopotamia the cultures of ancient Sumer and Babylon erected artificial mountains, or ziggurats, on the flat river plain. These supported staircases leading to temples at the top. The Hindu temples in India are often situated on high mountains. E.g. Amarnath, Tirupati, Vaishno Devi etc. The pre-Columbian residents of Teotihuacán in Mexico erected huge pyramids featuring staircases leading to heaven. Jacob's Ladder is an axis mundi image, as is the Temple Mount. For Christians the Cross on Mount Calvary expresses the symbol. The Middle Kingdom, China, had a central mountain, Kun-Lun, known in Taoist literature as "the mountain at the middle of the world." .....http://en.wikipedia.org/wiki/Axis_mundi

"The Ubaid period (ca. 6500 to 3800 BC] is a prehistoric period of Mesopotamia. The tell mound of al-`Ubaid (Arabic: العبيد‎) west of nearby Ur in southern Iraq's Dhi Qar Governorate has given its name to the prehistoric Pottery Neolithic to Chalcolithic culture, which represents the earliest settlement on the alluvial plain of southern Mesopotamia."....https://en.wikipedia.org/wiki/Ubaid_period

Kurgans...."The Scythian-Saka-Sibirian kurgans in the Early Iron Age are notable for their grandiose mounds throughout the Eurasian continent. The base diameters of the kurgans reach 500 m in Siberia (Great Salbyk kurgan of the settled Tagar culture); in neighboring China they reach 5000 m (kurgan of the first emperor of China in the 3rd century BC near Sian) (Mason, 1997: 71). Kurgans could be extremely tall: the Great Salbyk kurgan is 22 – 27 m (the height of a 7-story building); the kurgan of the Chinese emperor is over 100 m. The presence of such structures in Siberia testifies to a high standard of living and a developed construction culture of the nomads."......http://en.wikipedia.org/wiki/Kurgan

"Ca·lah (kl) also Ka·lakh (kälä).....An ancient city of Assyria on the Tigris River south of present-day Mosul, Iraq. It was probably built in the 13th century b.c......Calah, also spelled Kalhu, or Kalakh, modern Nimrūd, ancient Assyrian city situated south of Mosul in northern Iraq. ...In the 7th century bc, Calah declined in importance because the Sargonids tended to use Nineveh as their residence; nonetheless it continued to be extensively occupied until the fall of Nineveh in 612 bc."

"A castle (from Latin: castellum) is a type of fortified structure built in Europe and the Middle East during the Middle Ages by nobility. Scholars debate the scope of the word castle, but usually consider it to be the private fortified residence of a lord or noble. This is distinct from a palace, which is not fortified." 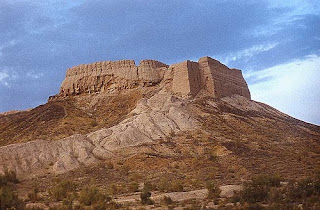