"Apsaras are celestial dancing girls, born of clouds and water. Perhaps from the Churning of the Sea of Milk, or perhaps created in various other magical ways, such as from the thigh of a sage. They are handmaidens in Indra’s court (Hindu tradition), and the consorts of heavenly musicians. First mentioned in Iron Age Hindu poems (Rig-Veda 1700 BC), they appear in many stories, slipping into Buddhist tales too, turning up all over Asia, from Indonesia to Japan. Apsaras dance and play music, they fly and float on clouds. Sometimes they act as muses, or valkyries, or are sent to test the resolve of holy men. Or to teach and protect. We might call them angels, nymphs, or houris.....some of their sisters, such as the ethereal Tang and Song creations of Dunhuang, who flutter around the ceilings and in the high corners of the Buddhist caves, like moths trying to find a way out to freedom but endlessly drawn back to the bright lights within. Then there are the wild naked girls of Tantric lore, dancing with their ash-smeared bodies and raggedy hair in cremation grounds, drinking blood from human skulls. "......http://traceyrohrsheim.wordpress.com/tag/apsara/

"Apsaras fly together through the sky like a little cloud of miniature birds (so they are sometimes known as sky dancers), and appear to humans in their clouds at special points in their lives,.....stories say that apsaras can distract and drain the energy and memory of any intruding human who tries to venture into their protected areas.".....http://everything2.com/title/Apsara

"Apsaras are beautiful, supernatural female beings. They are youthful and elegant, and superb in the art of dancing. They are often the wives of the Gandharvas, the court musicians of Indra. They dance to the music made by the Gandharvas, usually in the palaces of the gods, entertain and sometimes seduce gods and men......There are two types of Apsaras; Laukika (worldly), of whom thirty-four are specified, and Daivika (divine), of which there are ten....."http://en.wikipedia.org/wiki/Apsara 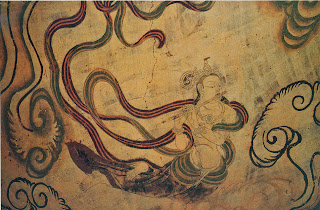 "An Apsara (also spelled as Apsarasa) is a female spirit of the clouds and waters in Hindu and Buddhist mythology.....An Apsara (Sanskrit: अप्सराः apsarāḥ, plural अप्सरसः apsarasaḥ, stem apsaras-, a feminine consonant stem), is also known as Vidhya Dhari or Tep Apsar, Accharā (Pāli)......English translations of the word "Apsara" include "nymph," "celestial nymph," and "celestial maiden.....Apsaras are sometimes compared to the muses of ancient Greece, with each of the 26 Apsaras at Indra's court representing a distinct aspect of the performing arts. Apsaras are associated with water; thus, they may be compared to the nymphs, dryads and naiads of ancient Greece. They are associated with fertility rites."....http://en.wikipedia.org/wiki/Apsara

"'Skydancer' is a translation of the Tibetan word 'Khandroma' (dakini), 'female buddha'. Many of the songs provide secret precepts given to her by her teachers and by her to her disciples. These oral instructions belonging to the supreme path of tantra (anuttara-yoga-tantra) and Dzokchen provide the core of the biography.......Dowman, Keith (1996) Sky Dancer: The Secret Life and Songs of the Lady Yeshe Tsogyel. Ithaca NY: Snow Lion"

"Mahadeva (Tib. Lha Chenpo or Shiva -- the Auspicious,) as Buddhist deity with consort, Uma (Durga is her warrior nature.).....http://www.khandro.net/dakini_the64.htm

"In Minoan times (pre-1500 BCE) Hera was depicted bearing a staff and bowl similar to the attributes of Vajrayogini. ".....http://www.khandro.net/dakini_the64.htm

"There is a distinction among the terms goddess, shakti, yogini and dakini (also, shakini) though in general conversation it is blurred and the terms are used interchangeably. ...Dakini retains the connotation, though somewhat less in the Buddhist context, of a frightening being. In some Indian texts the word is used as a synonym for sorceress, witch or even ghoul. One of her essential qualities is the ability to fly; perhaps that is one of the reasons why temples dedicated to dakinis are open to the sky.".....http://www.khandro.net/dakini_the64.htm

"The worship of 64 Yoginis is seen commonly between 800 and 1300 AD ....most of the temples dedicated to Yoginis are built in this era. The cult is influenced by Tantrik rituals and a great deal of the worship was conducted to achieve powers of black magic. Devotees who performed this worship were known to conduct the Shava Chhedan ceremony — meaning the beheading of a dead body as the ultimate symbol of detachment from earthly desires. The members of this cult never harmed living beings and never conducted animal or human sacrifices. Until 1500 AD, there are references in history to the widespread following of this cult."......Vidya Dehejia, associate director of the Smithsonian Institute in Washington and chief curator of both the Freer and the Arthur M. Sackler Galleries, in a book on the subject of Yogini Temples. 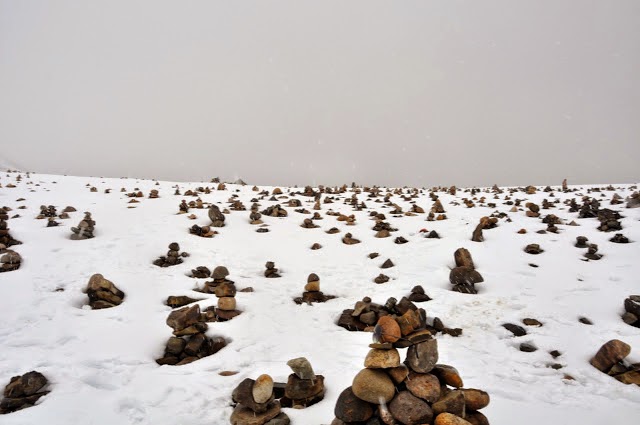