"My most favorite person in music, Mozart...sat in the sense that his mind became blank before he composed. Some kind of mind-less-ness in the Buddhist sense has to take place."..(Trungpa: 1996..pg 20)... 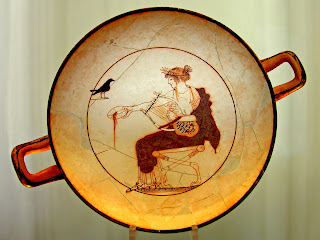 A kylix depicting the god Apollo pouring a libation and holding an early version of the lyre (chelys) which was made from the shell of a tortoise......Delphi, 480-470 BCE, (Delphi Archaeological Museum).

"In Hinduism and Buddhism, the Sanskrit term बीज bīja (Jp. 種子 shuji), literally seed, is used as a metaphor for the origin or cause of things and cognate with bindu.....In Vajrayana Buddhism and Hinduism, the term bīja is used for mystical "seed syllables" contained within mantras. These seeds do not have precise meanings, but are thought to carry connections to spiritual principles. The best-known bīja syllable is Om, first found in the Hindu scriptures the Upanishads".....http://en.wikipedia.org/wiki/Bija 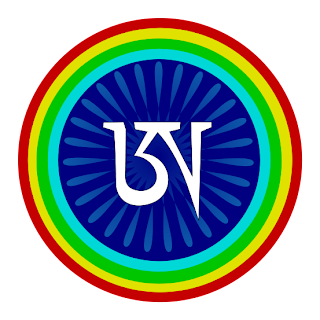 "Everything that arises as manifest phenomena, consisting of sounds, lights, and rays (sgra 'od zer gsum), whether as pure vision or as impure karmic vision, is part of one's own potentiality (rang rtsal), the manifesting of the energy of one's intrinsic Awareness (rig-pa'i rtsal) in external space (phyi dbyings). ".....John Myrdhin Reynolds....'The Golden Letters'....Page 157

"The word music comes from the Muses, the daughters of Zeus and patron goddesses of creative and intellectual endeavours....Pythagoras and his school, who laid the foundations of our knowledge of the study of harmonics—how strings and columns of air vibrate, how they produce overtones, how the overtones are related arithmetically to one another.....Plato: a complex system of relating certain emotional and spiritual characteristics to certain modes (scales). The names for the various modes derived from the names of Greek tribes and peoples, the temperament and emotions of which were said to be characterized by the unique sound of each mode. Thus, Dorian modes were "harsh", Phrygian modes "sensual", and so forth.".....http://en.wikipedia.org/wiki/Music_of_ancient_Greece

"Some suggest that the origin of music likely stems from naturally occurring sounds and rhythms. Human music may echo these phenomena using patterns, repetition and tonality. Even today, some cultures have certain instances of their music intending to imitate natural sounds. In some instances, this feature is related to shamanistic beliefs or practice."....Hoppál, Mihály (2006). "Music of Shamanic Healing".

"melody (from Greek μελῳδία - melōidía, "singing, chanting"), also tune, voice, or line, is a linear succession of musical tones that the listener perceives as a single entity. It also is an exponential succession of musical tones perceived as two entities. In its most literal sense, a melody is a combination of pitch and rhythm, while more figuratively, the term can include successions of other musical elements such as tone color.".....http://en.wikipedia.org/wiki/Melody

"The Music of Gurdjieff ......… Georgi Ivanovich put always a great weight on music. He himself played and he also composed. If we compare it with the music of all the religions, we can see that music plays a great role, a great part, in so to say, religious service. But after the work of Georgi Ivanovich, we can understand it more, we can understand it better, that music helps to concentrate oneself, to bring oneself to an inner state when we can assume the greatest possible emanations. That is why music is just the thing which helps you to see higher. In this regard, I will just play."…Thomas de Hartmann....http://www.gurdjieff.org/triangle.htm 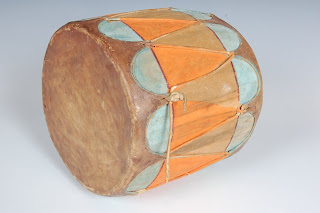 "The drum is a powerful instrument. Indigenous people refer to it as the heartbeat of Mother Earth. It is used in many spiritual and sacred ceremonial practices. Some say the beat of the drum has the power to change natural elements, including the weather. It is believed to have the power to heal sickness, and some believe it has the power to send messages both to the animal world and to the spirit world.....The drum is broadly considered to be the first musical instrument used by humans. Historians and music ethnologists alike point out that the drum has been utilized by virtually every culture known to mankind for a multitude of purposes. In ancient times, the earliest drums were used for religious rituals, social dances, sporting events, feasts, special ceremonies, in preparation for hunting, and as a prelude to war. However, it is virtually a universally held belief that the original purpose of the drum was to communicate.....Drums made with alligator skins have been found in Neolithic cultures located in China, dating to a period of 5500–2350 BC. In literary records, drums manifested shamanistic characteristics and were often used in ritual ceremonies."....http://en.wikipedia.org/wiki/Drum