"Khedrup Khyungpo Naljor, whom Jamgon Kongtrul regarded as the greatest master ever to have graced Tibet after Guru Padmasambhava and the 25 disciples, was born in a year of the tiger in the southern part of Tibet, into a distinguished family, the clan of the Khyung, being the same extended family clan from which the lord of yogins Jetsun Milarepa hailed somewhat later......his own name meant "the Yogin of the Garuda clan."....http://rywiki.tsadra.org/index.php/Khyungpo_Naljor

KHYUNGPO CLAN..."Jamgon Kongtrul provides a lengthy account of the divine origin of the ancestors of the Khyungpo clan, whose descendents include some of the most outstanding figures of both the Buddhist and Bonpo traditions." (Kongtrul: 1995..pg 15)...

"There is no mention in any of the original Sanskrit and Vedic texts about the two opposing races called Aryan and Dravidian. The word Arya was used to designate a person as 'noble'. A wife will call her husband, 'O Arya' or 'O Arya-putra' meaning 'O my noble one' or 'O son of your noble father'. It was in this context that the word Arya was used in ancient Indian literature including Mahabharata. This appellation was given even if the husband belonged to the Rakshasa tribe. The word 'Dravida' was used to denote a tribe of people. In Mahabharata it was used to denote a tribe living some where in modern-day southern Andhara Pradesh. This tribe themselves used the appellation 'Arya' to denote nobility of a person. The appellation 'Arya' has some remote similarity with the appellation 'Ahura' (which cognates with the Vedic 'Asura') of Zend Avesta which also denote nobility of a person. In some occasions, the term Dravida is used as a collective term to denote the southern tribes of Chola, Pandya and Kerala, much like the noun Bahlika was used as a collective term to denote the western tribes like the Madra, Bahlika, Kekaya, Gandhara and Kamboja or the term Mlechcha was used to denote all the sea-trading tribes established on the sea shores of what is now Gujarat, Karachi, Bengal and Bangladesh. Even then, there was no instances where the Dravida tribe was mentioned as being opposed by an 'Aryan' tribe from the north. Usually the Dravida tribes were found to be allies of the northern tribes, for example the Keralas, the Pandyas and the Cholas were mentioned as allies of the Pandavas in their battle against the Kauravas.".....http://ancientvoice.wikidot.com/the-myth-of-aryan-dravidian-divide

"Kaul, Koul, Caul or Kol (Kashmiri: कौल (Devanagari), کول (Nastaleeq)) is a surname used by the Kashmiri Pandit
community.The term also refers to the Kaul clan from which several other krams (surnames) of Kashmir have originated.
The word Kaul, meaning well born, is derived from Kula, the Sanskrit term for family or clan. Its use as a surname or
appellation is a derivative of the ancient name Kaula which means well born and is related to Saivite beliefs.....
Shiva followers were thus called Kaulas.....since the Aryan Saraswat Brahmins of Kas'mira were believers in Saivism
and Shakta, the peak of Saivism in Kashmir around the 9th century ~ 12th century gave rise to use of the
name.....Abhinavgupta was born into a Kashmiri Pandit family. "Abhinavagupta" was not his real name, rather
a title he earned from his master, carrying a meaning of "competence and authoritativeness".
Abhinavgupta was a one-word title given to him, and he was most likely from the Kaul clan and therefore a
Brahmin.....http://en.wikipedia.org/wiki/Kaul


"Society in the Avesta shows the division into the three classes: the Athravan or Priests, the Rathaeshtar or warrior, and the Vastryosh or Husbandman, corresponding to the first three 'castes' of India, in other words 'the Twice-born' classes. To these three was added at a much later period (just as was the case in India) a fourth class the Hutokhsha or Manual-worker. The king belonged to the warrior or the Ruler class, and held supreme power in the land; but the Religious Teacher was his equal in every way 'verily by reason of his Righteousness'. The name of the Priestly class, Athravan, indicates the cult of Fire, which the Great Teacher had definitely established in Iran.

"Within the territory of Olmo Lung-ring there are seven royal races (rgyal rigs) and chief among them is the clan of Mushen (dmu-gshen) from which Tonpa Shenrab descended. Thus the word "gshen" is also the name of a clan, as well as the term for a kind of practitioner. Besides the Mushen, there were six more royal races or clans (rgyal rigs) ruling in Olmo Lung-ring: "Hos", "Shag", "dPo", "rGya", "gTo", and "gNyan". There are also classes of ministers, merchants, artisans, commoners, and so on.

KHOTAN...(Li Yul)...near the Tarim River..."Khotan (kamsadesa, Li Yul) an ancient city-state in Central Asia, beyond the Karakorum Range. The city has been buried for centuries near the village known as Yotkan."...(Kongtrul: 1995..pg 153)..."The Khotanese Sakas, whose conversion to Buddhism was so complete that almost nothing remained of their original Iranian religion. The same is true of the Tokarians. The Sogdians kept many elements. Central Asian Iranian traditions: Khotanese Sakas, Sogdians, Bactrains, Khwarizmians." (Litvinsky: 1992..pg 431)...Khotanese: the Middle Iranian, Scythian (Saka) language of Khotan in Central Asia.

Bactria was the homeland of Indo-European tribes who moved south-west into Iran and into North-Western India around 2500–2000 BC. 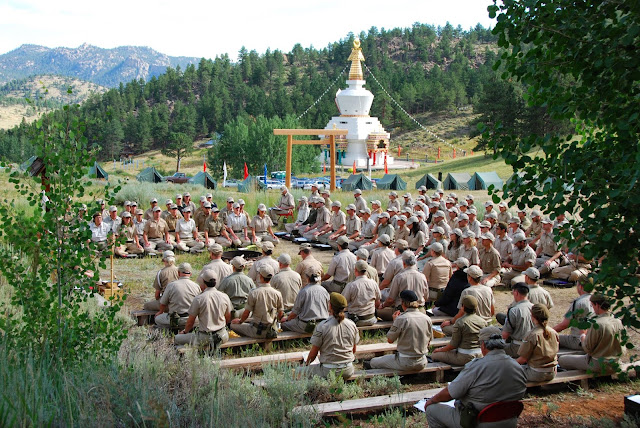 The Puranas record that Yayati left Prayag (confluence of the Ganges & Yamuna) and conquered the region of Sapta Sindhu.[87] His five sons Yadu, Druhyu, Puru, Anu and Turvashu correspond to the main tribes of the Rigveda.

In this account, Lanshi 藍市 [Lan-shih] must surely stand for Bactra, as Burton Watson indicates, as it was certainly the largest city and greatest trading centre in the region..... Lanshi (identified as Bactra or modern Balkh), which Burton Watson and others have identified as the country’s “capital.” In the above passage it is quite clear that the country was not ruled by an overall king located in Lanshì nor was there any central administration of the country from that city......Zhang Qian carefully notes that, “It [Bactria] has no great ruler but only a number of kings ruling the various cities.” The Chinese word used to describe the status of Lanshi is du 都 [tu] which can mean either the capital (of a country) or, preferably here, a large town, city or metropolis. It is clear from the context that the latter is the sense in which it should be interpreted in this context. See Dorn’eich (1999b), p. 40; GR No. 11668; CED, p. 291

Median tribes: Busae, Parataceni, Struchates, Arizanti, Budii, Magi...... The achievement of Deioces was to unite under his rules the peoples of Media - Busae, Parataceni, Struchates, Arizanti, Budii, Magi.....The Persian nation contains a number of tribes [...]: the Pasargadae, Maraphii, and Maspii, upon which all the other tribes are dependent. Of these, the Pasargadae are the most distinguished; they contain the clan of the Achaemenids from which spring the Perseid kings. Other tribes are the Panthialaei, Derusiaei, Germanii, all of which are attached to the soil, the remainder -the Dai, Mardi, Dropici, Sagarti, being nomadic [Herodotus, Histories.

The garuda and the dragon have their origin in Indian and Chinese mythology, respectively. However, regarding the origin of the animals as a tetrad, "neither written nor oral explanations exist anywhere" with the exception of a thirteenth century manuscript called "The Appearance of the Little Black-Headed Man" (dBu nag mi'u dra chag), and in that case a yak is substituted for the snow lion, which had not yet emerged as the national symbol of Tibet.