"The Pamir Mountains are a mountain range in Central Asia formed by the junction of the Himalayas with Tian Shan, Karakoram, Kunlun, and Hindu Kush ranges. They are among the world’s highest mountains, and since Victorian times, they have been known as the "Roof of the World", presumably a translation from Persian......In other languages they are called: Kyrgyz Памир тоолору Pamir Toolori; Persian: رشته کوه های پامیر‎ Reshte Kūh-hāye Pāmīr; Tajik: Ришта Кӯҳҳои Помир Rishta Kuhhoyi Pomir; Pashto: د پامير غرونه‎ Da Pamir Ghruna; Uyghur: پامىر ئېگىزلىكى Pamir Ezgizliki; Urdu: پامیر کوهستان Pamir Kuhestan; simplified Chinese: 葱岭; traditional Chinese: 蔥嶺; pinyin: Cōnglǐng; Wade–Giles: Ts'ung-ling or "Onion Range" (after the wild onions growing in the region). The name "Pamir" is used more commonly in Modern Chinese and loaned as simplified Chinese: 帕米尔; traditional Chinese: 帕米爾; pinyin: Pàmǐ'ěr......The precise extent of the Pamir Mountains is debatable. They lie mostly in Gorno-Badakhshan province, Tajikistan and Badakshan Province, Afghanistan. To the north they join the Tian Shan mountains along the Alay Valley of Kyrgyzstan. To the south they join the Hindu Kush mountains along the Wakhan Corridor in Afghanistan and Gilgit–Baltistan in Pakistan. To the east they may end on the Chinese border or extend to the range that includes Kongur Tagh which is sometimes included in the Kunlun Mountains." 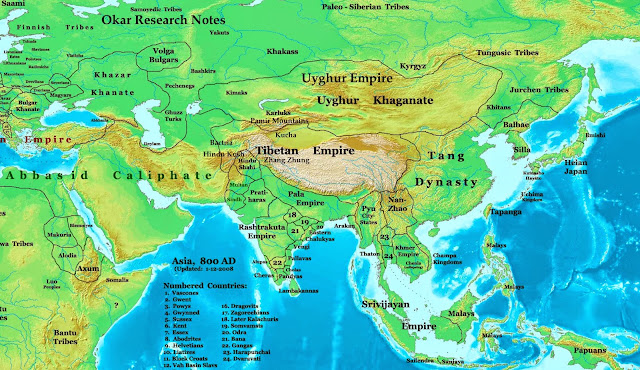 Khocho....."Gaochang (Chinese: 高昌; pinyin: Gāochāng), also called Qara-hoja or Kara-Khoja (قاراھوجا in Uyghur), is the site of an ancient oasis city built on the northern rim of the inhospitable Taklamakan Desert in Xinjiang, China. The site is also known in published reports as Chotscho, Khocho, Qocho, or Qočo. During the Yuan and Ming dynasties, Gaochang was referred to as "Halahezhuo" (哈拉和卓) (Qara-khoja) and Huozhou......A busy trading center, it was a stopping point for merchant traders traveling on the Silk Road. It was destroyed in wars during the 14th century, and old palace ruins and inside and outside cities can still be seen today. The ruins are located 30 km southeast of modern Turpan. Nearby Gaochang is the site of the Astana tombs.....The earliest people living in this area were the Yuezhi (Yushi)."...Beckwith, Christopher I. Empires of the Silk Road: A History of Central Eurasia from the Bronze Age to the Present. Princeton University Press, Princeton 2009

"Kucha or Kuche (also: Kuçar, Kuchar; Uyghur كۇچار, Chinese Simplified: 龟兹; Traditional: 龜茲; pinyin Qiūcí; also romanized as Qiuzi, Qiuci, Chiu-tzu, Kiu-che, Kuei-tzu from the traditional Chinese forms 屈支 屈茨; 龜玆; 龟兹, 丘玆, also Po (bai in pinyin); Sanskrit: Kucina, Standard Tibetan: Kutsahiyui) was an ancient Buddhist kingdom located on the branch of the Silk Road that ran along the northern edge of the Taklamakan Desert in the Tarim Basin and south of the Muzat River.....While the material civilization of Kucha to its west in this period remained chiefly Indo-Iranian in character, in Goachang it gradually merged into the Tang aesthetics."...Beckwith, Christopher I. Empires of the Silk Road: A History of Central Eurasia from the Bronze Age to the Present. Princeton University Press, Princeton 2009

AMU DARYA...upper valleys of the Pamirs enabled Zoroastrian pockets to survive up to the present times...

"Later Shambhalists would identify the ancient Uighur kingdom of Khocho, centered around the Turfan Depression, as one of the prime candidates for the physical location of Shambhala....."(http://www.shambhala.mn/Files/csoma.html)

George Roerich’s book Trails to Innermost Asia mentions that while in Khotan they visited various ruins, but mentions by name only the Rawak Stupa, then as now the most conspicuous stupa in the area......Rawak is the ruins of an ancient magnificent Buddhist stupa, about 60 km northeast of central Hotan in southern Xinjiang, China......It was built in the third or fourth century C.E. when the Kingdom of Khotan was a leading center of Buddhist learning. It was was abandoned by the fourth to seventh century.....

".... the tale of Shripala, although legendary in nature, does contain a curious detail which might pertain to the actual physical location of Shambhala. According to the Dro Tradition a young man, the son of two yoga practioners, heard that boddhisattvas themselves were teaching the Dharma somewhere to the north of India in the country of Shambhala. Eager to learn the Dharma he set out on a journey to find these teachers. Beyond India but before reaching Shambhala, we are told, he encountered a vast desert which would have taken four months to cross......One may speculate here that the desert in question is the Taklamakan Desert of western China. As noted earlier, the Uighur kingdom of Khocho, located at the northern edge of the Taklamakan, has often been posited as the "historical" Shambhala. To reach Khocho from the southern edge of the Taklamakan would indeed have taken four or more months, depending on what route the traveler took.

"The lapis lazuli found in Egyptian tombs is thought to come from the Pamir area in Badakhshan province of Afghanistan. About 138 BC Zhang Qian reached the Fergana Valley northwest of the Pamirs. Ptolemy vaguely describes a trade route through the area. From about 600 AD, Buddhist pilgrims travelled on both sides of the Pamirs to reach India from China. In 747 a Tang army was on the Wakhan River. There are various Arab and Chinese reports. Marco Polo may have travelled along the Panj River. In 1602 Bento de Goes travelled from Kabul to Yarkand and left a meager report on the Pamirs. In 1838 Lieutenant John Wood reached the headwaters of the Pamir River."

"Khagan Tengri Bögü met with Manichaean priests from Iran while on campaign and was converted to Manicheism, adopting it as the official religion of the Uyghur Empire in 762.[6] One effect of this conversion was the increased influence of the Sogdians in the Uyghur court."..... Manichaeism and Nestorian Christianity, H. J. Klimkeit, History of Civilizations of Central Asia,