Kalash has ancient Bactrian Roots, it resisted the Muslim takeover for 800 years, it has several similar characteristics, and the Kingdom into the Hindu Kush mountains in order to survive. 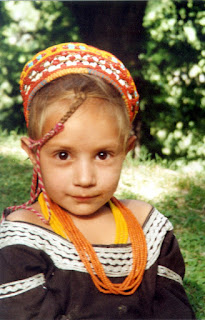 "Kalash religion is similar to the religion that was practiced by Rigvedic aryans. Kalash have retained most of the Proto-Indo-Iranian religion (Indo-European religion). The Kalash people are unique in their customs and religion. The Hindukush area shares many of the traits of IIr. myths, ritual, society, and echoes many aspects of Ṛgvedic, but hardly of post-Ṛgvedic religion. Kalash culture and belief system differs from the various ethnic groups surrounding them but is similar to that of the neighboring Nuristanis in northeast Afghanistan......The isolated Kalash have received strong religious influences from pre-Islamic Nuristan.... the pre-Islamic Nuristani religion: Before their conversion to Islâm the Nuristânis practiced a form of ancient Hinduism, infused with accretions developed locally". They acknowledged a number of human-like deities who lived in the unseen Deity World (Kâmviri d'e lu; cf. Sanskrit deva lok'a-)......There are a number of other deities, semi-gods and spirits. The Kalash pantheon is thus one of the last living representatives of Indo-European religion......There also is a general pattern of belief in mountain fairies now often called by their Persian name, Peri, but still called Apsaras in the Rājataraṅgiṇī, Suchi (súči, now often called Peri), who help in hunting and killing enemies, and the Varōti, their violent male partners. They live in the high mountains, such as Tirich Mir, but in late autumn they descend to the mountain meadows. The Jach (j.ac.) are a separate category of female spirits of the soil or of special places, fields and mountain pastures....Ritual still is of IIr.type: Among the Kalash it is basically, though not always, temple-less, involving fire, sacred wood, three circumambulations, and the *hotṛ......The Kalash are known as indigenous people of Chitral, and their ancestors migrated to Chitral from Afghanistan in the 2nd century BC.....Recently, the Kalash have been able to stop their demographic and cultural spiral towards extinction and have, for the past 30 years, been on the rebound."....http://en.wikipedia.org/wiki/Kalasha_(religion)#Religion

The Kalash tribe, numbering approximately 3,000, are the smallest group amongst the religious minorities of Pakistan. Non-Muslim, they live in the Hindu Kush between the Afghan border and Chitral valley in the region once known as Bactria. Kalash myths tell that they originally came from Tsiam, thought to be near Yarkand. The Kalash oral tradition also tells that the Kalash are descended from Alexander the Great’s brave general Shalak Shah of Tsiam, to whom Alexander gave the Chitral valley as a reward. Kalasha language is of great interest to linguists as it belongs to the ancient Dardic branch of the Indo-European languages, suggesting a Central Asian origin.

Around 1500 AD the Kalash were dominant throughout southern Chitral; the Kalasha oral tradition mentions eight great Kalasha kings. This tribe enjoyed centuries of independence living as warriors and hunters. For eight or nine centuries they held out against the tide of Islam, raiding Muslim settlements and caravans until at the end of the last century they came under the suzerainty of Afghanistan. Their way of life, architecture, traditional culture and language are remnants of the former traditions . They still live in villages of 100 to 200 wooden houses remarkable both inside and out for neatness and cleaness, are clustered together, clinging precariously to the steep- sided valleys , the women still till their fields by hand, while the men look after their live stock and irrigation channels.

There is some controversy over what defines the ethnic characteristics of the Kalash. Although quite numerous before the 20th century, the non-Muslim minority has seen its numbers dwindle over the past century. A leader of the Kalash, Saifulla Jan, has stated, "If any Kalash converts to Islam, they cannot live among us anymore. We keep our identity strong."About three thousand have converted to Islam or are descendants of converts, yet still live nearby in the Kalash villages and maintain their language and many aspects of their ancient culture. By now, sheikhs, or converts to Islam, make up more than half of the total Kalasha-speaking population.

Kalash culture differs among the various ethnic groups. These polytheists are highly spiritual and believe in the power of religious traditions such as sacrifices and festivals to appease the forces of nature. Much of their mythology and folklore are quite similar to those of ancient Greece and the Indo-Iranian traditions.

Their religion and belief system strongly resembles those of the Indo-Aryans and pre-Zoroastrian Iranians. They believe in a number of deities, demi-gods and spirits and a whole pantheon. Some of their principle gods are:

They believe that the god Sorizan protects their herds during fall and winter, while the responsibility is that of god Goshidai, until the full moon festival.

Indr or Varendr: The rainbow and slayer of vṛtra or resistance. Jesṭan: Indra's demon-like counterpart. Munjem Malik: Lord of Middle Earth. Mahandeo: God of crops and war, and a celestial negotiator. Jestak: The goddess of domestic life. Dezalik: The goddess of childbirth. Suchi: The mountain fairies.

These deities are believed to be appeased with goat sacrifices. The priests or ištikavans are protectors of the shrines constructed around wooden or stone altars. Horses, cows and goats are sacrificed regularly. Wine is considered a sacred drink and prepubescent boys are treated with great respect. Read more at Buzzle: http://www.buzzle.com/articles/kalash-tribe.html

The Afghan border was a few miles to the west, just the other side of my final destination, the valleys of the Kafir Kalash (the name translates as 'infidel wearers of black'), once part of an area known as Kafiristan, the setting for Kipling's The Man Who Would Be King. A century ago, all the Afghan Kafirs were forcibly converted to Islam (the alternative was execution) and their homeland became Nuristan (Country of the Enlightened), a province of Afghanistan. Gentler attempts were made to convert Kafirs living in today's Pakistan, but their resistance has ensured the continuation of their own pagan religion, culture and habits. Despite its association with Islamic fundamentalists, Pakistan allows freedom of religion. There are churches, at least one synagogue, Hindu temples and pagan sacrificial altars. Both sexes are heavily into their surprisingly palatable and strong red wine.

Most have fair skin and blue eyes and are shown by DNA studies, possible linguistic similarities and historical and oral traditions to be descended from the armies of Alexander the Great.

At the core of all Kalash cosmology are the concepts of onjesta and pragata energies. Nangar Dehar, the greatest Kalash shaman and initiator of most Kalash rituals, entered a trance and shot two arrows, one red, one black. The black arrow's landing place was to be the sacrificial altar and centre of onjesta energy, to be visited by only men; the red arrow's, the bashali and centre of pragata energy, to be visited by only women.

All life forms, places and objects are accorded measures of onjesta and pragata. Generally, wine, water, holy sites, men and goats head the onjesta list, while women, Muslims and chickens are the main carriers of pragata. There is communal concern to keep the equally important energies separate. When women attend the bashali, their men do their normal daily tasks. In the bashali women can be creative and resolve personal issues without the stress of village life.

'Our spiritual leaders, kazis [judges], maintain our legends. They can recite or sing all 4,000 of them. They will teach their sons to do the same. The shaman communicates with our gods to find out what needs to be done and informs us.'

"....the Kalash don't have a word for goodbye.... They never leave here; otherwise they lose their identity.'