HERODOTUS..."Anyone who does business with the Scyths (Sakae) needs seven interpreters speaking seven languages. Sharp divisions among the pastoral tribes has to be recognized." (Rudenko: 1970..pg 226)... 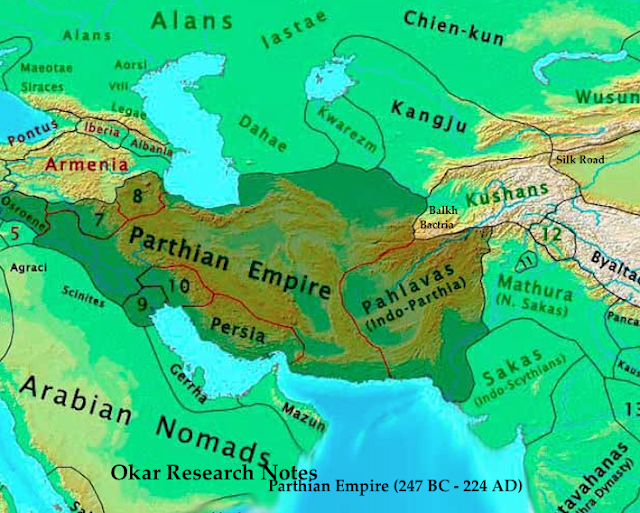 Sakya (Shakya): derived or descended from the Sakas, from whom the historical Buddha came, whence his honorific Sakymuni. "Sage of the Sakyas." Many people of the Sakya tribe followed the Buddha after his enlightenment.

Sakyamuni (Shakyamuni): The author or reviver of Buddhism, whose birth appears to have occurred in the seventh, and death in the sixth century before Christ He was the son of Suddhodama, king of Kapila-Vastu (Kapilavatthu) or of Magadha. He was also called Sakyasimha ("lion of the Sakyas").

" The linguistic history indicates that the Aryans ("Indo-Europeans"..."Iran") originally formed a single people until the beginning of the 2nd millenium BC when the Deva worshipping Indian Aryans and the Asura worshiping Iranian Aryans went separate ways." (Yarshater: 1987..pg 684)...The Kalachakra discusses the expulsion of the Deva worshippers from Shambhala and refers to the Rigden kings as Asura...... "
Rigden..."the eighth Rigden and subsequent Kings were called Kulika (rigs ldan) "one who bears the lineage". (Hopkins: 1985..pg 60)...


"Northern India was originally populated by Aryans of the Tarim Basin (Xinjiang Province of Western Mongolia) who migrated through Afghanistan. "

Saka (Scythian) and Shakya (the Buddha's tribe) are likely unrelated, although both were probably Indo-Aryan (since the Shakya were Kshatriya).

Professor Michael Witzel - one of the world's leading Indologists - said: "The name of the Buddha’s clan, the Sakya (Skt. s'aakya [i.e. śākya]), cannot be separated from the designation of the northern Iranian Saka (Skt. S'aka [i.e. śaka]) that entered India only after c. 140 BC via Sistan." ...... though the Śākya's are portrayed as kṣatriya, the Buddha was called "Gautama" which is a distinctive and prestigious Brahmin name (associated with the ṛṣi Gotama who composed book 4 of the Ṛgveda)

The Shakas first conquered Sogdia from the Graeco-Bactrians and then, in 139 BCE, during the reign of King Menandros, took Bactria as well. There, the Shakas turned to Buddhism.

SAKA..."On the map of Shambhala, Saka is shown exactly where it is supposed to be: north of Bactria near Lake Balkash.(45N-75E).Between 154 and 114 BC the Saka broke through the Parthian defense lines and seized a region in eastern Persia that has retained their name to this day: Sakastan (Seistan).(Kuznetsov: 1970..pg 568)..."Shag-yul: Country of the Saka. This is in the northeast corner of the map and refers to the consolidation of the Saka and Yueh-chi (Tocharians) in the Kushan dynasty."(Kuznetsov: 1970..pg 573)...Shapur: King of the Sakas......"By the testimony of Herodotus, the Greeks called them Scyths and the Persians called them Sakas."...(Rudenko:1970)..."The Sacae conquered Media in 630 BC and ruled for 28 years. Median King Astibar. Zarina, queen of the Sacae. Kydreias, King of the Sacae. Tomyris, queen of the Massagetae. Sacian King Amorg." (Rudenko: 1970..pg 224)... SAKA...MASSAGETAE....OD-MA-BYAMS-SKYA'I-YUL..."Mhgasakata or 'great Saka' the name of the Saka tribes known as the Massagetae to the Greeks. In the northeast is the 'country of strong Saka, reflecting the consolidation of the Saka and the Yueh-chi (Tocharians) in the Kusha dynasty under Kadphises I in the 1st century AD."..."...(Kuznetsov: 1970...pg 574-576)..."Zarina, warrior queen of the Sacae. After the death of her husband Kydreias she married the Parthian Prince Mermer." (Rudenko: 1970..pg 224)... SAKYA (Saka, Shaka, Sacae, Shakya).....The first seven Kings of Shambhala were descended from the Shakya clan..(Bryant: 1992..pg 69)... A Scythian tribe originated near Lake Balkash but were forced to move south in 165 BC. Occupied the Swat Valley and Gandhara after conquering the Indo-Greeks. Alexander fought against the Massagetae, a people of the nomadic Saka confederacy in 328 BC on the site of the modern Leninabad (Khojent) on the Jaxartes. This became Alexandria Eschate, (40 N, 80 E), his farthest excursion into Central Asia. (Encyclopedia Britanica)....Sucandra was the first of the seven Shakya kings of Shambhala.His father was Shakya Shambha." (Bernbaum: 1980..pg 285)...Saka is a Middle Iranian Language.....The Saka peoples appear North East of Iran as mounted nomads in 530 BC. Cyrus failed to subdue the Massagetae beyond the Oxus in 530 BC." (Phillips: 1965..pg 129)...[Sidenote: the Kalachakra initiation is never performed in the Northeast Sector of a community]....In Persian sources, the Scythians (8-3rd C BC) were called Saka......"The Saka tribes who settled in the western Pamir in the 2nd Century BC were obviously not able to continue their nomadic ways."..(Gafurov: 1968..pg 137)...."On the map of Shambhala, Saka is shown exactly where it is supposed to be, north of Bactria, near Lake Balkash (45N-75E). Between 154 and 114 BC the Saka broke the Parthian defense lines and seized a region in eastern Iran known as Sakastan (Seistan)." (Kuznetsov: 1970..pg 568)..."The ancient Persian Sun- worship and the period of the Sakas beginning in the middle of the 2nd Century BC." (Humbach: 1978..pg 241)...."Shaapur, King of the Sakyas"..."Herodotus, the classical Greek historian, went to Scythis and gathered a great deal of first hand information." (Rudenko: 1970..pg xxx)..."Among the Black Sea Scythes, King Scylas did not like the Scythian way and was deposed by Octamasadas." (Rudenko: 1970...pg 216)..."Scythian King Idanthyrus, whom Darius avoided in battle." (Rudenko: 1970..pg 286)...

SAKYA (India): "Saka Kings like Rudradamana had taken to the Sanskrit language and Vaisnava religion. Malwa, Guzerat and Kathiawad had been ruled for centuries by the Saka dynasty" (Dasgupta: 1962..pg cii)....Gautama Buddha was a member of the Shakya tribe. Mahavira, the founder of Jainism, was a member of the Jnatrkas tribe...The earliest Saka King was Maues, (Mauakes Moga) 95-75 BC. Mathura (in modern Uttar Pradesh) was an early headquarters. Their coins not only included the Indian goddess Lakshmi, but also the Greek Palla Athene and Herakles. Malwa, with their capital city of Ujjain in the Western Kshatrapas, from which they ruled Rajputana and Maharashtra for 300 years...."The period of the invasion of the Sakas and Kushans into India in the middle of the 2nd Century BC." (Acta: 1978..pg 239)

Shakya (Sanskrit: Śākya, Devanagari: शाक्य, Pāli: Sākya) was an ancient janapada (kingdom) of Iron Age India. In Buddhist texts, the Śākyas are mentioned as a Kshatriya clan.....Kshatriya, meaning warrior, is one of the four varnas (social orders) in Hinduism. Traditionally Kshatriya constitute the military and ruling elite of the Vedic-Hindu social system outlined by the Vedas and the Laws of Manu.....Sanskrit akṣatra, ruling; one of the ruling order member of the Kṣhatriya caste is the derivation for Old Persian xšaθra ("realm, power"), xšaθrya ("royal"), and xšāyaθiya ("emperor") are related to it, as are the New Persian words šāh ("emperor") and šahr ("city", "realm"). Thai: กษัตริย์ (kasat), "king" or "monarch," and similar-sounding Malay kesatria or satria, "knight" or "warrior", are also derived from it. The term may also denote aristocratic status.

The Sākyas were one of a number of small tribes—Kāmāla, Malla, Vṛji, Licchavi,, etc.—who do not appear in the Ṛgveda. Pāṇini (ca 5th century BCE) knows the Mallas and Vṛji as desert tribes in Rajasthan, and ambassadors of Alexander the Great met a tribe called Malloi in the same region......The Śākya nation was later subsumed into the Kingdom of Kosala under Viḍūḍabha.

Around 200 CE, the Manu Smriti describes the downfall of the Yavanas, as well as many others: "But in consequence of the omission of the sacred rites, and of their not consulting Brahmanas, the following tribes of Kshatriyas have gradually sunk in this world to the condition of Shudras;the Paundrakas, the Chodas, the Dravidas, the Kambojas, the Yavanas, the Shakas, the Paradas, the Pahlavas, the Chinas, the Kiratas, the Daradas and the Khashas." (Manusmritti, X.43–44)......There are important references to the warring Mleccha hordes of the Yavanas, Sakas, Kambojas, Pahlavas, etc. in the Bala Kanda of the Valmiki Ramayana......Indologists like Dr H. C. Raychadhury, Dr B. C. Law, Satya Shrava and others see, in these verses, the clear glimpses of the struggles of the Hindus with the mixed invading hordes of the barbaric Sakas, Yavanas, Pahlavas, Kambojas, etc. from north-west. The time frame for these struggles is 2nd century BCE downwards. Dr Raychadhury fixes the date of the present version of the Valmiki Ramayana around/after 2nd century CE......The invading hordes of the Sakas, Kambojas, Yavanas, Pahlavas, Abhiras, etc. from the north-west had entered Punjab, United Province, Sindhu, Rajasthan and Gujarat in large numbers, wrested political control of northern India from the Indo-Aryans and had established their respective kingdoms and principalities in the land of the Indo-Aryans........There is also a distinct prophetic statement in the Mahabharata which says that the Mlechha (Barbaric) kings of the Sakas, Yavanas, Kambojas, Bahlikas, Abhiras, etc. will rule unrighteously in Kaliyuga.

"The title of "Shahi".....In ancient time, the title Shahi appears to be a quite popular royal title in Afghanistan and the north-western areas of the Indian sub-continent. It was used by Achaemenids Sakas, Kushanas, Hunas, Bactrians, by the rulers of Kapisa/Kabul, and Gilgit. In Persian form, the title appears as Kshathiya, Kshathiya Kshathiyanam, Shao of the Kushanas and the Ssaha of Mihirakula (Huna chief). The Kushanas are stated to have adopted the title Shah-in-shahi ("Shaonano shao") in imitation of Achaemenid practice.....An ancient Jaina work, Kalakacarya-kathanaka, says that the rulers of the Sakas who had invaded Ujjaini/Malwa in 62 BCE also used the titles of Sahi and Sahnusahi. Since the title Shahi was used by the rulers of Kapisa/Kabul or Gandhara also in imitation of Kushana "Shao", it has been speculated by some writers that the Shahi dynasty of Kapisa/Kabul or Gandhara was a foreign dynasty and had descended from the Kushans or Turks (Turushkas). However, the title has been used by several rulers irrespective of any racial connotations and this may refute the above speculation."