The Samye Debate......"The Chan master Moheyan in the Samye debate on Tantric purification practices: "It doesn’t matter whether the cloud is white or black–it still blocks the sun."....he didn’t advocate the suppression of thoughts (with a blank mind “like an egg” as one version of the Samyé debate nicely puts it). He says this quite clearly: Therefore you should not suppress concepts. Whenever they arise, if you do not fabricate anything but instead let them go, then they will stay as they are and come to rest by themselves; thus you will not pursue them.".....Samye Monastery was the first Buddhist monastery to be founded in Tibet. It is also notable as the site of the "Great Debate" (792-794) between the Indian Mahayanists and Chinese Chán (Zen) Buddhists.

"THREE SCHOOLS OF BUDDHISM. Introduced in India around 500 BC by Gautama, Buddhism swept quickly (some 1000 years) across Asia, splitting into three main schools (Theravada, Mahayana, Vajrayana) as it evolved. In India, its birthplace, Buddhism died out around 1200 AD, succumbing to Muslim invasions and resurgent Hinduism. But by then it was flourishing in Southeast Asia, Tibet, China, Korea, and Japan -- it came last to Japan, crossing the sea around 520 - 550 AD. Although the Japanese court was quick to adopt Mahayana Buddhism, the teachings of the Theravada and the Vajrayana (Tantric or Esoteric) schools did not go unnoticed or unpracticed. Sects from all three schools are still active in Japan today, but the dominant form is clearly Mahayana."......http://www.onmarkproductions.com/html/schools-three-vehicles.shtml

"Bodhidharma and The Zoroastrian Origin of Zen (Chan) Philosophy.......Bodhidharma was clearly a Persian Zoroastrian trader, possibly a Mitharist of sorts. From Soghdia, a Persian kingdom in Central Asia (current Uzbekistan) with extensive trade connections to China. Zen as Persian and not Chinese or Japanese philosophy."....Jeffrey L. Broughton (1999): The Bodhidharma Anthology: The Earliest Records of Zen (Berkeley: University of California Press) .....Broughton notes that Bodhidharma was a Persian from Central Asia. ......This paper investigates the relationships between Mithraism, Persian culture, Zen and Mahayana Buddhism 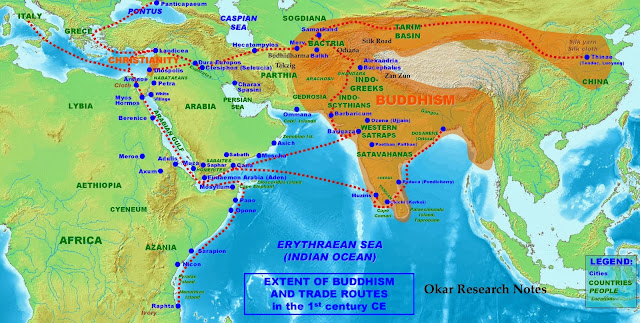 "....... Iranian influence upon Zen Buddhism.....Characteristic elements of Zen Buddhism, i. e. the founder of Zen, Kegon-kyō, the Vijnāna-vādin, Mādhyamaka philosophies, the Prajñāpāramitā literatures and Ten Bull Pictures are examined in the context introduced by to show their Persian connection....... http://www.kavehfarrokh.com/wp-content/uploads/2010/04/zen_buddhism_and_persian_culture_v1.pdf

"Dzogchen and Chinese Buddhism.....The historical origin of the Dzogchen teachings and the relationship of Dzogchen to certain other Buddhist teachings and traditions, such as Yogachara and Ch'an or Zen, has puzzled scholars not only in the West, but in Tibet itself. Some leading Tibetan Lama scholars have accused Dzogchen of being a Chinese Dharma (rgya-nag gi chos), or assert that it is connected with Bon or Advaita Vedanta. Regarding this question in the West for example, W.Y. Evans-Wentz in his pioneering book on Dzogchen, The Tibetan Book of the Great Liberation (1954), writes, "Our present treatise, attributed to Padmasambhava, which expounds the method of realizing the Great Liberation of Nirvana by yogic understanding of the One Mind, appertains to the Doctrine of the Great Perfection of the Dhyana School.".....http://www.vajranatha.com/articles/dzogchen-chinese-buddhism-and-the-universal-mind.html

"Since the second propagation on the Buddist doctrine in Tibet, in which teachings of non-Indian origin were dismissed..."... (Kongtrul:1995..pg 28......Myriad Worlds: Buddhist Cosmology in Abhidharma, Kalachakra & Dzog-chen..... Jamgon Kongtrul Lodro Taye )..."

The Samye debate between Indian and Chinese Buddhism was in 792 AD, . The Indian side, led by Kamalashila, won; the Chinese, led by the Chinese monk Moheyan , were expelled from Tibet. The Tibetans officially adopted Indian Buddhism..

"The classic account of the debate and the source for all later Tibetan historians, is the Testament of Ba. And this, even in the earliest form available to us, is clearly not a disinterested account. It gives the proponent of the Chinese view a brief paragraph to defend his position, followed by pages and pages of the proponents of the Indian view. And most of the refutation of the Chinese approach is spoken by a Tibetan nobleman from the Ba clan.

" ...the great debate convened by the Tibetan emperor Trisong Detsen. The debate was to decide between the Chinese and Indian versions of Buddhism that were being taught in Tibet at the time. The Indian teachers favoured the scholastic Buddhism that was found in India’s great monastic universities at the time, while Chinese teachers taught mainly meditation in the style they called Chan.... (Gomez, Luis. 1983. “The Direct and Gradual Approaches of Zen Master Mahāyāna: Fragments of the Teachings of Moheyan,” in Studies in Ch’an and Hua-yen, edited by Gimello and Gregory: 393–434)

"There’s a Chinese manuscript from Dunhuang (Pelliot chinois 4646) that tells another debate story. As in Testament of Ba, the Chinese side is represented by the Chinese monk Moheyan, but the proponents of the other view are only mentioned as “Brahmin monks.” This manuscript also talks about “discussions” by letter over several months, rather than a staged debate. And the biggest difference is that it ends with the Tibetan emperor giving his seal of approval to the Chinese teaching...(http://earlytibet.com/2010/03/31/tibetan-chan-iv/)

Zen is a school of Mahayana Buddhism and originated in China during the 6th century as Chán.

"Meeting the students of other teachers was especially disappointing. These students seemed to lack any understanding of discipline, and purely to appreciate teachers who went along with their own neurosis. No-one seemed to be presenting a way of cutting through the students' neurosis. One outstanding exception to this situation was Shunryu Suzuki-roshi and his students, whose presence felt like a breath of fresh air. I would have more contact with them later.......During this period I traveled a great deal. On my second visit to California, I was able to spend more time with Suzuki-roshi, and this proved to be an extraordinary and very special experience. Suzuki-roshi was a Zen master in the Soto Zen tradition who had come to America in 1958 and founded the Zen Center, San Francisco and Zen Mountain Center at Tassajara Springs. He was a man of genuine Buddhism, delightful and profound, full of flashes of Zen wit. In the example of his spiritual power and integrity, I found great encouragement that genuine Buddhism could be established in America. His students were disciplined and dedicated to the practice of meditation, and on the whole presented themselves as precise and tidy. Mrs. Suzuki also I found to be a wonderful woman who was very generous to both myself and Diana.......When Suzuki-roshi died in December of 1971, I was left with a feeling of great lonesomeness. Yet his death had the effect on me of arousing further strength; his genuine effort to plant the Dharma in America must not be allowed to die. I did, however, feel especially keenly the loss of the possibility of exploring further the link beauty. Through Suzuki-roshi's spiritual strength and his accomplishments in the arts of the Zen tradition....."....http://www.cuke.com/bibliography/trungpa-born.html 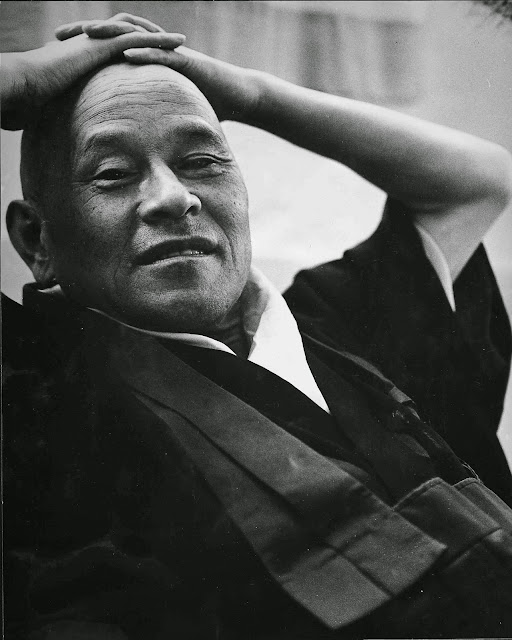 "Kanishka also had the original Gandhari vernacular, or Prakrit, Mahayana Buddhist texts translated into the high literary language of Sanskrit, "a turning point in the evolution of the Buddhist literary canon.....The "Kanishka casket", dated to the first year of Kanishka's reign in 127 CE, was signed by a Greek artist named Agesilas, who oversaw work at Kanishka's stupas (caitya), confirming the direct involvement of Greeks with Buddhist realizations at such a late date.....The new syncretic form of Buddhism expanded fully into Eastern Asia soon after these events. The Kushan monk Lokaksema visited the Han Chinese court at Luoyang in 178 CE, and worked there for ten years to make the first known translations of Mahayana texts into Chinese. The new faith later spread into Korea and Japan, and was itself at the origin of Zen.".....http://en.wikipedia.org/wiki/Greco-Buddhism