Shamanism in Ancient Central Asia (500 BC)

Chögyam Trungpa incorporated elements from numerous traditions into the Shambhala Path that he thought would be beneficial to practitioners:
Shamanic Elements of Interest Include: Blue Sky, Mounted Warrior Spirits, Emptying Mind and Body and Inviting Deities

"It is interesting to note that one of the ways the Buddhist schools of Tibet (and the Christian missionaries of North America) attempted to suppress Indigenous Tibetan Religion, was by accusing Bon practitioners of being ‘intellectually uncivilized’ – of being mere primitive shamans. However, in the deepest sense, shamanic belief is the Tibetans’ very lifeblood. Tibetans of any religious school who get ill will enact rituals, such as putting up prayer flags, to invoke their guardian spirits and perform ransom rites to remove disturbing spirits, without a moment’s hesitation. Shamanism contains much wisdom that is used to harmonise imbalances, by working on re-establishing good relationships with spirits. The work of Native American shamans in contacting guardian animals for guidance, strength and knowledge, is of great value for healing and for restoring a harmonious relationship with animals, the elements, the sky and the whole environment."......http://entheology.com/peoples/shamanism-in-the-native-bon-tradition-of-tibet/

"Shamanic and Buddhist Healing Practices in the Traditions of Tibet.....When Indian Buddhism came to Central Tibet in the 7th-8th centuries, it encountered a rich and flourishing religious culture characterized by shamanic practices. The principal function of this Tibetan shamanism was that of healing, especially of the impact upon human beings of negative energies (gdon) and hostile spirits (bgegs) residing in the wild places of nature. Such nature spirits would often become offended and irritated at humans because of their careless or deliberate polluting and dispoiling of the natural environment, which represented the home and residence of these spirits. Being energy beings, these spirits could then impinge upon the the personal energy fields, or auras, of those human individuals who had incured their hostility. Here in this weekend workshop we will principally be concerned with healing meditations and protection practices against negative energies, as well as the use of mantra-infused healing waters and fumigations, drawn from the ancient Tibetan traditions of Buddhism, Bön, and Shamanism."......http://www.vajranatha.com/schedule.html 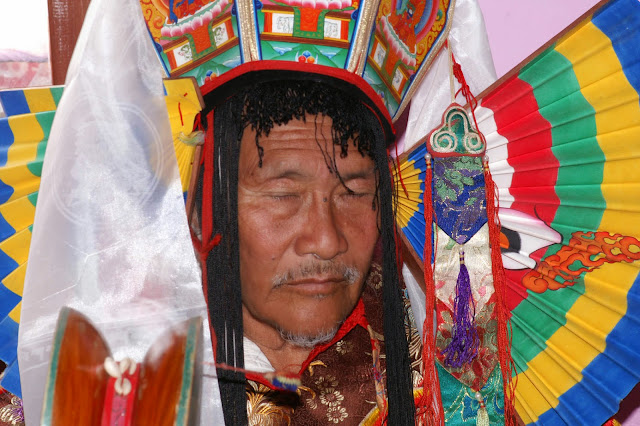 Historical Tengrism surrounded the cult of the sky god and chief deity Tengri and incorporated elements of shamanism, animism, totemism and ancestor worship. It was brought into Eastern Europe by the Huns and early Bulgars. It lost its importance when the Uighuric kagans proclaimed Manichaeism the state religion in the 8th century.

In Tengriism, the meaning of life is seen as living in harmony with the surrounding world. Tengriist believers view their existence as sustained by the eternal blue Sky, Tengri, the fertile Mother-Earth, spirit Eje, and a ruler who is regarded as the holy spirit of the Sky. Heaven, Earth, the spirits of nature and the ancestors provide every need and protect all humans. By living an upright and respectful life, a human being will keep his world in balance and maximize his personal power Wind Horse.

There is a Tengrist society in Bishkek, which officially claims almost 500,000 followers and an international scientific center of Tengrist studies. Both institutions are run by Dastan Sarygulov, the main theorist of Tengrism in Kyrgyzstan and a member of the Parliament

In Europe, Tengrism was the religion of the Huns and of the early Bulgars who brought it to the region. It is said that the Huns of the Northern Caucasus believed in two gods. One is called Tangri han (that is Tengri Khan), who is thought to be identical to the Persian Aspandiat, the other is called Kuar...It is actively practised in Sakha, Buryatia, Tuva and Mongolia in parallel with Tibetan Buddhism and Burkhanism.

Buryatia is located in the South-central region of Siberia along the eastern shore of Lake Baikal, where Mongolia, Siberia and China meet. The traditional spiritual practice in Buryatia is a blend of Tibetan Buddhism Gelugpa and Siberian shamanism. The Buryats had practiced this path for ages but the shamanic traditions in Buryatia are still so little known to the Western world...The ancestors of Buryats used to live in yurts, in the steppes, they were nomads and were travelling from place to place, they worshipped the Great Mother Earth and the Eternally Blue Sky, in Buryat language "Huhe Munhe Tengeri”, this is where the word "tengerism" comes from that defines better the shamanism in Buryatia and Mongolia . They cherished the Mother Earth and had a deep respect to the Farther Sky .....http://scoalamisterelor.blogspot.com/2011/01/shaman-and-shamanism.html

Buryatian 'shamans' call their religion Bө Murgel or Bө Shazhan, with murgel and shazhan both meaning 'religion' in general and bө being the main name. Bө Murgel is not peculiar to Buryats alone but is found in various forms among various Mongol tribes and also in Tuva. In Bө and Bön we will focus on the Buryatian version as it is this strand which I have studied and, to some extent, practised. Lake Baikal - the world's largest volume of freshwater, home to many unique flora and fauna, source of inspiration and steeped in legend - is central to this tradition, and much revered....A rich and powerful belief system, Bө Murgel's priests (Bө) and priestesses (Utgan) were forced to shed many of the outer aspects of their religion - such as elaborate ritual costumes - under the persecution of the Soviet regime which saw many followers of Buddhism and Christianity slaughtered in the bloody repressions. The Bө and Utgan fared better, melting back into the magical web of the natural landscape, focussing on the more mystical aspects of their traditions retaining their core beliefs and invocations which are now once again practised collectively in the ancient power places of this vast and impressive land....the word 'shaman' has a very precise meaning; it is a Russian corruption of the Tungus-Evenki word šaman, an adjective used to designate the priest of their religion....In Siberian shamanic traditions (as in Bön and Buddhism) all techniques and teachings have their own precise source and are passed down through a line of authentic masters....the various native Siberian spiritual traditions have many cults and concepts in common due largely to their similar cultural, religious and geographical environment, the differences between them are comparable to those between major world religions. One of the most important aspects found in all Siberian religions is Polytheism and indeed, this is very developed in modern-day Buryatian Bө Murgel which probably has the biggest and most complex pantheon among all the native Siberian religions. The main distinctive feature of Bө Murgel, however, is its cults of Huhe Münhe Tengeri (Eternal Blue Sky) and Tengeri (Sky-Dwelling Gods)"....Siberian Shamanism & Bө Murgel....DMITRY ERMAKOV

Neanderthal Shamanism.......Archaeologists led by prof. Pawel Valde-Nowak of the Institute of Archeology, Jagiellonian University, after many years of research in the cave Obłazowa (District Nowy Targ) reached rock bottom, and thus gave a complete stratigraphy position. The oldest and deepest layers are associated with the presence of the Neanderthal cave. During the last season of research, researchers also found further evidence for the celebration of human rituals inside the cave. "At the bottom of wkopu formed in the upper Paleolithic, or about 30 thousand. Years ago, we discovered machined, for both cut and ground fossil snail shell Conus' - informs Professor. Valde-Nowak. This is the third shell found inside the cave. Earlier, according to an archaeologist, are part of the ritual team from cultural layer pavlowskiej. "I do not exclude that the shell can be found musical instrument used by the shaman in the cave during the celebration of rituals" - said Prof. Valde-Nowak.

The Middle Paleolithic (MesolithicStone Age) spans the period from 300,000 to 50,000 years ago. Some of the earliest significant evidence of religious practices dates from this period.....

The earliest known undisputed burial of a shaman dates back to the early Upper Paleolithic era (c. 30,000 BC) in the area of the present-day Czech Republic. However, it was probably more common during the early Upper Paleolithic for religious ceremonies to receive equal and full participation from all members of the band in contrast to the religious traditions of later periods when religious authorities and part-time ritual specialists such as shamans, priests and medicine men were relatively common and integral to religious life. The earliest known Paleolithic shaman (c.30,000 BC) was female.(?) Additionally it is also possible that Upper Paleolithic religions - like contemporary and historical animistic and polytheistic religions - believed in the existence of a single creator deity in addition to other supernatural beings such as animistic spirits.

Tedlock, Barbara. 2005. The Woman in the Shaman's Body: Reclaiming the Feminine in Religion and Medicine. New York: Bantam.....A distinguished anthropologist–who is also an initiated shaman–reveals the long-hidden female roots of the world’s oldest form of religion and medicine. Here is a fascinating expedition into this ancient tradition, from its prehistoric beginnings to the work of women shamans across the globe today. Shamanism was not only humankind’s first spiritual and healing practice, it was originally the domain of women. This is the claim of Barbara Tedlock’s provocative and myth-shattering book. Reinterpreting generations of scholarship, Tedlock–herself an expert in dreamwork, divination, and healing–explains how and why the role of women in shamanism was misinterpreted and suppressed, and offers a dazzling array of evidence, from prehistoric African rock art to modern Mongolian ceremonies, for women’s shamanic powers.

The Finno-Ugric shamans of Siberia had sacred drums covered with cabalistic signs. The heart and lungs were the seat of the spirit in humans.....(Decker: 1989)...the word Kam first appears in the Uighur text: 'Kudatku Bilik' in 1069 AD," (Chadwick: 1969..pg 235)..."the heads of the Asian pastoral tribes were the Wu-sun, the Huns, the Yue-chi, and the Wu-huan. In each tribe there were elders as well as warleaders." (Rudenko: 1970..pg 215)..."The royal tombs of Pazyryk in the Altai in the 5th-3rd Centuries BC. West of Lake Baikal. The bodies prove that Mongols were then mingling with Indo-European stock." (Hawkes: 1976..pg 178)..."People inhabiting the Altai in 200 BC had a similar manner of life to those occupying the steppes of Central Asia and the areas west of the Caspian Sea." (Rudenko: 1970..pg xxx)...

"This ancient Tibetan shamanism and animism, the pre-Buddhist spiritual and religious culture of Tibet, was known as Bon, and a practitioner of these shamanic techniques of ecstasy and ritual magic, the methods of working with energy, was known as a Bonpo. Bonpo is still the designation for a shaman in many tribal regions of the Himalayas. But increasingly, over the centuries, the ecstatic shaman has been replaced by the priestly Lama or ritual expert, and so later Bonpos in Central Tibet also came to fill a role more ritualistic than ecstatic. There exists a parallel here to what occurried in ancient India where the Rishis or ecstatics of the early Vedic period, who communed directly with the celestial gods during ecstatic flights into the heavens, were later replaced by Brahman priests, experts in the performing of rituals and sacrifices in order to invoke the powers of the gods and ensure their cooperation for human benefit and prosperity.".....http://vajranatha.com/articles/traditions/bonpo.html?start=1