"Another source of spiritual home that made Bactria sacred was a great temple of the ancient goddess Anahid, or Anailtis- Tanata in Persian and Ananita in the Avesta hymns. The temple was so rich that often it attracted the needy Syrian kings who sat out to plunder it. In her name and honor, in Armemia, girls prostituted themselves. Anaitis was a Scythian goddess, but she is identified also as Assyrian Mylitta, the Arabian Alytta and the Greek Venus Urania. Artaxerxes Mnemon of the Sassanids was among her devotees. She is also associated with the Persian Mithra. Her association with Zoroaster adds to her popularity."....http://www.iranchamber.com

AVESTA....."Armaiti is the Spirit of the Earth, and also of Divine Wisdom and Grace, both in the Avesta and in the Veda. She has the rank of an Amesha-Spenta (a Holy Immortal, corresponding to an Archangel in Christianity) in the Zoroastrian Hierarchy. In the Avesta she also represents the Spirit of Obedience to the Eternal Law of God and also in a few passages in the Rig-Veda she represents the same idea. But on the whole her position in the Veda is much humbler than in the Avesta, for in the latter she is represented as the Guardian of the Faith of Zarathushtra."...http://www.iranicaonline.org

"The female protectress of Balkh, Anahita goddess of the Oxus, in Alexander’s day. Anahita’s magnificent gilded statue had been gifted by one of Darius’s predecessors, Artaxerxes II. Thousands had come to licentious rites in the precinct of the ‘High girdled one clad in a mantle of gold, on her head a golden crown with rays of light and a hundred stars clad in a robe of over thirty otter skins of shining fur’….

"Anahita is the Old Persian form of the name of an Iranian goddess and appears in complete and earlier form as Aredvi Sura Anahita (Arədvī Sūrā Anāhitā); the Avestan language name of an Indo-Iranian cosmological figure venerated as the divinity of 'the Waters' (Aban) and hence associated with fertility, healing and wisdom. Aredvi Sura Anahita is Ardwisur Anahid or Nahid in Middle- and Modern Persian, Anahit in Armenian. An iconic shrine cult of Aredvi Sura Anahita, was – together with other shrine cults – "introduced apparently in the 4th century BCE and lasted until it was suppressed in the wake of an iconoclastic movement under the Sassanids."...Boyce, Mary (1983), "Āban", Encyclopædia Iranica 1, New York

The Greek and Roman historians of classical antiquity refer to her either as Anaïtis or identified her with one of the divinities from their own pantheons. 270 Anahita, a silicaceous S-type asteroid is named after her.

"Only Ardəvī is specific to the divinity.The words sūra and anāhīta are generic Avestan language adjectives, and respectively mean "mighty" and "pure" (or "immaculate"). Both adjectives also appear as epithets of other divinities or divine concepts such as Haoma and the Fravashis. Both adjectives are also attested in Vedic Sanskrit.

"As a divinity of the waters (Abān), the yazata is of Indo-Iranian origin, according to Lommel related to Sanskrit Sarasvatī that, like its Proto-Iranian equivalent *Harahvatī, derives from Indo-Iranian *Sarasvntī. In its old Iranian form *Harahvatī, "her name was given to the region, rich in rivers, whose modern capital is Kandahar (Avestan Haraxvaitī, Old Persian Hara(h)uvati-, Greek Arachosia)."[1] "Like the Indian Saraswati, [Aredvi Sura Anahita] nurtures crops and herds; and is hailed both as a divinity and the mythical river that she personifies, 'as great in bigness as all these waters which flow forth upon the earth'."...Boyce, Mary (1983), "Āban", Encyclopædia Iranica 1, New York

"In the (Middle-)Persian texts of the Sassanid and later eras, Arədvī Sūra Anāhīta appears as Ardwisur Anāhīd. There is no occurrence of Anāhīta in Old Avestan and her presence in Avesta is limited mainly to two instances. In non-Avestan world, the oldest mention of her name is indeed in many Old Persian documents. Her popularity in Western Iran is significantly higher than Eastern Iran. The evidences suggest a western Iranian origin of Anāhīta.

"Proto-Indo-Iranians worshiped many gods including several ‘nature gods’ such as Asman, the Lord of sky (Aseman in modern Persian), Zam, the earth goddess (Zamin in modern Persian) and the sun and the moon, Hvar and Mah (khorshid & Mah in modern Persian). There were two gods of the Wind, Vata and Vayu, the wind that blows and the wind that brought the rain-clouds. Vata the rain-bringer was associated with ‘Harahvati Aredvi Sura’, the Sanskrit Sarasvati meaning ‘Possessing waters’. She personified a mythical river, held to pour down from a great sea called in Avesta, Vourukasha, meaning ‘of many bays’ and all rivers flow out of this sea. Tishtrya, meaning ‘the God of the Dog Star’ protected the clouds that brought rain. Every year he goes to the shores of Vourukasha in the shape of a splendid white stallion and fights the Demon of Dearth, Apaosha in shape of a black stallion. Then he rushes into the sea and the waves through encounter with Tishtrya produced water in abundance. Vata snatches the waters up into the clouds and scatters it all over the ‘the haft kashvar’ (seven countries). Zoroastrians had a major celebration for Tishtrya around 13th of Farvardin the time Iranians celebrate as Seezdeh be-dar, and till 19th century there were horse races on this day. This very likely was a reminiscent of ancient festivals re-enacting the myth of the battle of the stallions. Iranians still make offerings to the water on the 13th of Farvardin by throwing their ‘Sabzeh’ (green growth, a plant offering) into the waters. "....Boyce, Mary (1983), "Āban", Encyclopædia Iranica 1, New York 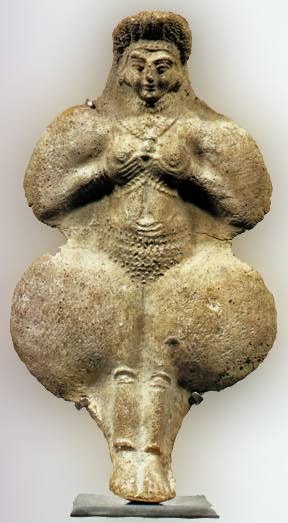 "ANAHITA.....In Susa, south of Iran, mother goddess was worshiped at least since early 4th millennium BC, with numerous statuettes of her found in the area. The tradition of worshiping the mother goddess spilled over to Mesopotamia, where it continued for thousands of years to come. ....Aredvi Sura Anahita is the Avestan language name of an (Indo-)Iranian cosmological figure, venerated as the divinity of 'the Waters' (Aban) and hence associated with fertility, healing and wisdom. Her name is Ardwisur Anahid or Nahid in Middle- and Modern Persian, Anahit in Armenian. The Greek and Roman historians of classical antiquity refer to her either as Anaitis or identified her with one of the divinities from their own pantheons. .....The ancient Persian water goddess, fertility goddess, and patroness of women, as well as a goddess of war. Her name means "the immaculate one". She is portrayed as a virgin, dressed in a golden cloak, and wearing a diamond tiara (sometimes also carrying a water pitcher). The dove and the peacock are her sacred animals.....Anahita was very popular and is one of the forms of the 'Great Goddess' which appears in many ancient eastern religions (such as the Syrian/Phoenician goddess Anath). She is associated with rivers and lakes, as the waters of birth. Anahita is sometimes regarded as the consort of Mithra."....http://goddess-files.livejournal.com/1467.html

"The roles of the sexes in the realm of Shambhala are typical. It is exclusively men who exercise political power in the androcentric state. Of the women we hear only something of their role as queen mother, the bearer of the heir to the throne, and as “wisdom consorts”. In the “tantric economy” of the state budget they form a reservoir of vital resources, since they supply the “gynergy” which is transformed by the official sexual magic rites into political power. Alone the sovereign has a million (!) girls, “young as the eight-day moon”, who are available to be his partners."....http://www.american-buddha.com/aggres.myth.htm#THE%20AGGRESSIVE%20MYTH%20OF%20SHAMBHALA