Chögyam Trungpa incorporated elements from numerous traditions into the Shambhala Path that he thought would be beneficial to practitioners:
From Confucianism comes a framework of Heaven, Earth, and Man, and the Court Principle for understanding the proper relationship between different elements of society 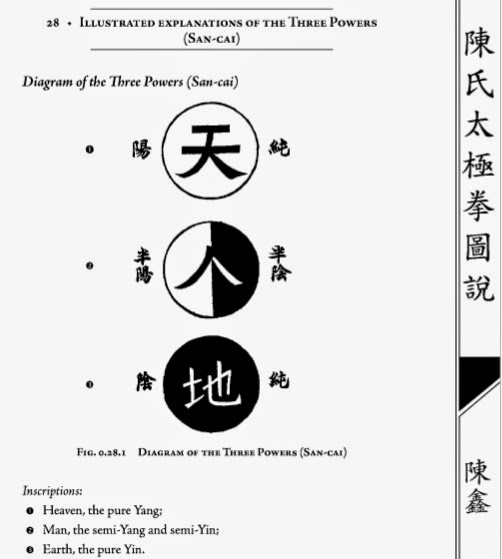 Emperor Wu (r. 140-87 BCE)....."Emperor Wu’s Confucianism deeply reflected the influence of his advisor Dong Zhongshu (175?-105? B.C.), who believed that the emperor served to link heaven with his subjects. If he governed well, heaven would continue to support him, but if he violated heaven’s intent, heaven could send various portents to warn him of his misconduct. These portents could appear in the form of eclipses, floods, droughts, or any other calamity. ...Emperor Wu may have turned to Confucian scholars like Dong Zhongshu as an alternative to the Huang-Lao school [i.e. a syncretic form of Daoism]. Dong Zhongshu urged the emperor to ban all members of non-Confucian schools, and he encouraged the emperor to support the study of Confucian classics. In the years just before or just after the empress’s death, the emperor named five scholars to the position of Erudite Scholars, each of whom specialized in a different Confucian classic: The Book of Changes The Book of Documents, The Book of Songs, The Book of Rites, and The Spring and Autumn Annals. The selection of these five books as the most important texts marked the first step in the formation of the Confucian canon."....http://bhoffert.faculty.noctrl.edu 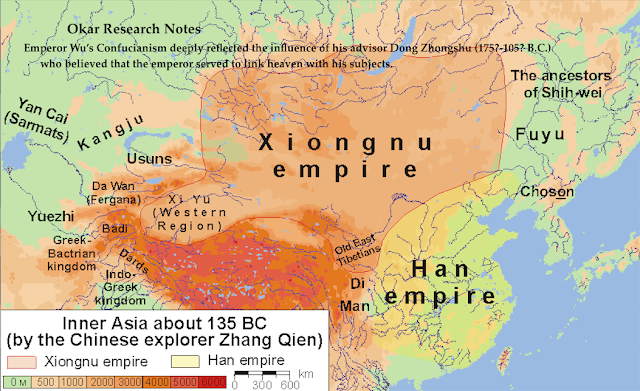 Confucius (551–479 BCE)....Confucius' family and personal name respectively was "Kong Qiu" (孔丘 Kǒng Qiū). His courtesy name was "Zhongni" (仲尼 Zhòngní). Following an Old Chinese reconstruction, his family and personal name respectively may have been Kʰˤoŋʔ Kʷʰə, while his courtesy name may have been Truŋsnˤərs. In Chinese, he is most often known as "Kongzi" (孔子, literally "Master Kong")

"By at least late imperial times, if not much earlier, Confucius became known in Tibet as a wise king and master of divination, and he became a follower of the Bon (苯教) mythic figure Tonpa Shenrab(东巴辛绕). The relationship between Tonpa Shenrab and Confucius is depicted in a thangka that is now in the collections of the Musée Guimet in Paris. This essay examines the visual content of the Guimet thangka and explores Chinese textual sources that shed light on understandings of Confucius in Tibet.....Confucius's fame extended far from his home town of Qufu （曲阜）, and it reached even as far as the Sichuan basin（四川盆地） and the Tibetan plateau （西藏高原）. By at least the eighteenth century, if not much earlier, Confucius became known in the Tibetan plateau region as the wise king "Kon-tse" or "Kongtse." One of the Tibetan titles for Confucius is "Kong tse 'phrul gyi rgyal po." Sinologists will immediately recognize "Kong tse" as a transliteration of "Kongzi." "Phrul gyi rgyal po" is rendered by Lin Shen-yu as "king of magic" (Lin 2007); by Karmay, as "wise king" (Karmay 1975; see also Gurung forthcoming). This Tibetan Confucius was understood as a master of divination and ritual and became a follower of the mythic figure Tonpa Shenrab （东巴辛绕，又作东巴幸绕）, who was one of the most important spiritual figures of the Bon teaching （苯教或苯波教）. "....Sages and Apocryphal Canons: Confucius in Tibet.....Deborah Sommer

"Four kings who are all closely related to Shenrab Miwo. These kings are the hos King Dangwa Yiring, the dpo King Barwe Dronmacan, the Kongpo King Karpo, and the magical King Kongtse. I have not found the names of the first two kings in old Tibetan documents, and therefore I am not certain as to whether the first two kings are historical figures. There are some references to hos in the Dunhuang Tibetan documents,6 although these may not be fully relevant here. We know slightly more about the two latter figures from Dunhuang sources and early Tibetan inscriptions. Particularly, the magical king Kongtse is a Tibetan version of Kǒng zǐ (孔子, Confucius), the famous Chinese sage who is said to have lived around the 6th century BC. Karmay (1975a) equates Kongtse with Confucius, Lin (2007) partly agrees but argues for Kongtse being a Tibetan image of Confucius and Gurung (2009) demonstrates that the role of Kongtse in Bon sources is comparable to the role of Shenrab Miwo....https://openaccess.leidenuniv.nl/bitstream/handle/1887/17677/Introduction.pdf?sequence=16