The Tibetan Muslims of Skardu Baltistan

"Skardu District (Urdu: ضلع سکردو‎) is part of Baltistan and currently constitutes one of the seven districts of the Gilgit–Baltistan territory of Pakistan. It is bounded on the southeast by Kargil district in the Indian-Administered Jammu and Kashmir, on the east by Ghanche District, on the northeast by Xinjiang (China), on the south by Baramulla and Kargil District, on the west by district Astore and on the north by Gilgit District......Skardu town is the capital of Skardu District."

"In the 14th century the Buddhist population of Baltistan, Kargil and some villages of Ladakh converted into Muslim as a result of preaching of Syed Ali Hamdani (714-786 al hija) – a saint and Islamic scholar of Kobravi sufi order followed by preaching of Syed Muhammad Nurbakhsh (795-859 alhijra) a disciple of Khawaja Ishaq Khatlani himself the principal successor of Syed Ali Hamdani of same Kubravi Sufi Order. Thus a Muslim society developed first time in the Northern Areas of subcontinent." 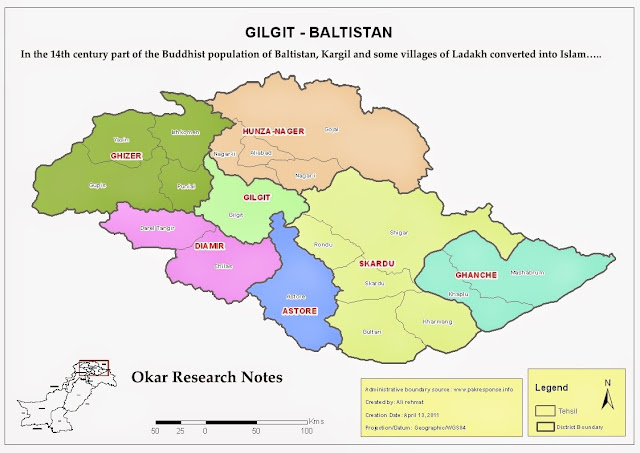 "Like the rest of the Tibetan Plateau, Nubra is a high altitude cold desert with rare precipitation and scant vegetation except along river beds. The villages are irrigated and fertile, producing wheat, barley, peas, mustard and a variety of fruits and nuts, including blood apples, walnuts, apricots and even a few almond trees. Most of the Nubra Valley is inhabited by Nubra dialect or Nubra Skat speakers. The majority are Buddhists. In the western or lowest altitude end of Nubra Valley near the Line of Control i.e. the Indo-Pak border, along the Shyok River, the inhabitants are Balti of Gilgit-Baltistan, who speak Balti, and are Shia and Sufia Nurbakhshia Muslims." 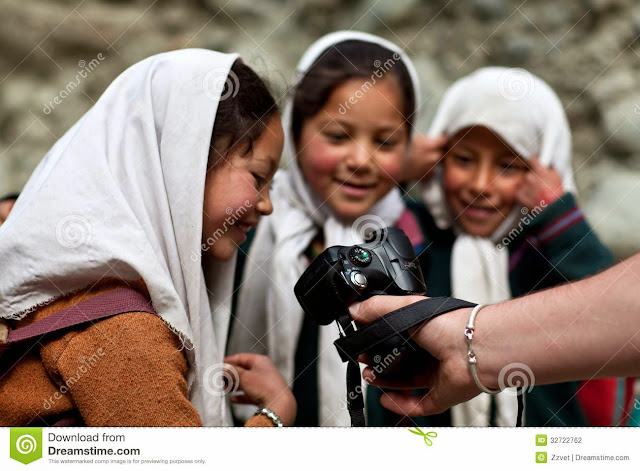 "The Gesar epic even seems to have played a small role in the struggle of a Tibetan speaking Muslim people in Pakistan. The Baltistan region, centered around Skardu, is home to some 300,000 people whose mother tongue is Balti, a language of the Tibetan-Ladakhi family. ”We are the only people in this region to have had our own script since the 6th century AD,” says Syed Abbas Kazmi of the Baltistan Cultural Foundation (BCF), ”but due to the ”narrow-mindedness of the mullah class our people were told to stop using Tibetan”. The result is that over the years, the linguistic and literary development of Balti has suffered. Urdu, the Persian/Arabic script of Pakistan was not suitable to writing of the Balti-Tibetan language according to Kazmi “…and hence our language became like a stray animal, our prose and poetry withered.” Kazmi, who is a scholar, has written a monograph on the Balti version of the old Tibetan Epic of King Gesar. He and his organization has, in spite of the harassment of officialdom and the mullahs, printed and distributed elementary Tibetan language textbooks and helped shopkeepers in Skardu put up signboards in Tibetan...
..I saw a video on YouTube of the Balti village of Turtuk, which became part of India in the 1971 Indo-Pak war. The people of the village speak Tibetan, perhaps with some Urdu and English words thrown in now and then, but unmistakably Tibetan. Yet these people are Muslim. There is a scene of a village council. The elders, one with a hennaed beard, one wearing an Afghan Pakol hat, one a turban, another a sheepskin Jinnah cap, make the gathering seem like a jirga in Afghanistan. But the they are all speaking Tibetan and they are talking about inviting the Dalai Lama to their remote village.
It becomes clear from the discussions that the need of these people to establish, or rather fortify their linguistic and ethnic origins, overrides concerns of welcoming and honoring a religious leader not of their own faith. After the Dalai Lama’s successful visit fifteen children are sent to the Tibetan Children’s Village school near Leh to be educated in Tibetan. The children have a matron from Turtuk to look after them, and besides being educated in Tibetan language and other school subjects they also learn the Koran and perform their daily namaaz.....What one gets from the video is a sense of the power that language has in establishing identity, which in this case happily appears to invalidate very real differences between two antithetical religions. I don’t know for how long the people of Baltistan will manage to keep their Tibetan ethnic and linguistic identity. It is possible that they might not be able to in the face of Islamic clerical and governmental pressure and coercion. Yet the fact that they have somehow managed to hang on to this heritage for over a thousand years is impressive and very moving. Clearly Tibetan is not one of those disappearing languages that experts say are becoming extinct at twice the rate of endangered mammals and four times the rate of endangered birds. Tibetan has, of course, the advantage of an old and practical (far more functional and efficient than Chinese) written script and a vast indigenous literature. It also has a calligraphic tradition that in terms of artistry and dynamism stand level with Arabic and Chinese.....Language is undoubtedly one the fundamental basis of Tibetan identity. Religion is important, of course, but has probably been overemphasized in the official Tibetan world because of the theocratic nature of the Tibetan government and its policy directions, which the Dalai Lama has clearly stated is the renunciation of political sovereignty in order to preserve the “Buddhist” culture of Tibet."...(http://uyghuramerican.org/article/through-blurry-cellphone-video-darkly-jamyang-norbu.html)