Tantra is the name scholars give to a style of religious ritual and meditation that arose in Central Asia no later than the fifth century CE. The earliest documented use of the word Tantra is in the Hindu text, the Rigveda (X.71.9)....... 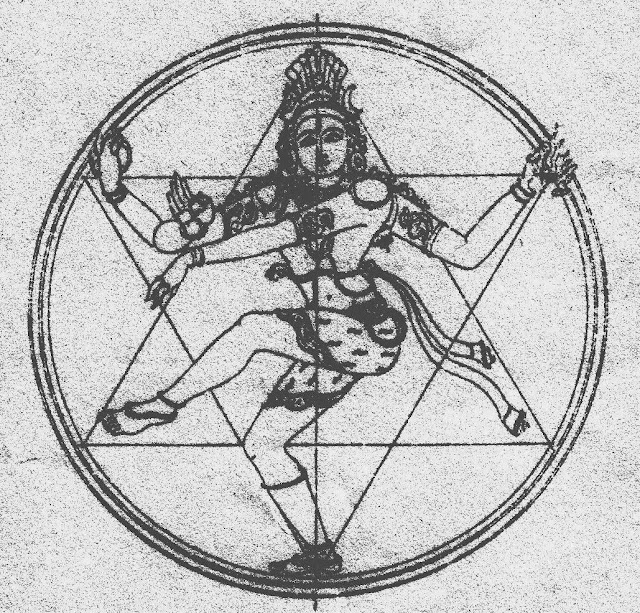 "Tantra and Dzogchen in the Buddhist and Bonpo Traditions of Tibet....."Meditation practice has always been at the core of Buddhism everywhere in Asia, and this is also true of the related Bonpo tradition of Tibet. Accordingly, the teachings and the practices revealed by the Buddha may be classified into the three levels of Sutra, Tantra, and Dzogchen, corresponding to the three dimensions of human existence of body, energy, and mind. Sutra is mainly concerned with the nature of human existence in the world, especially one’s ethical conduct and behavior towards other living beings in this present life. Nevertheless, meditation practice at the Sutra level is fundamental and is decidedly psychological in its approach. Tantra is more concerned with the individual’s dimension of energy, that is to say, how to access energy and then how to direct and channel it for specific purposes, such as healing. Dzogchen, however, represents the discovery of the nature of mind in one’s immediate experience at the core of one’s being. All three approaches aim at the attaining of liberation from suffering in Samsara and the realizing of enlightened awareness as the essence of one’s being. We shall investigate the foundations of meditation practice in both the Buddhist and the Bonpo traditions of Tibet and in the weekend workshop the emphasis will be on actual meditation practice.".....http://www.vajranatha.com/schedule.html

Tantric Shaivism was known to its practitioners as the Mantramārga,
Tantric Buddhism has the indigenous name of the Vajrayana,
Tantric Vaishnavism was known as the Pañcarātra.

"Tantrism originated in the early centuries CE and developed into a fully articulated tradition by the end of the Gupta period. Tantric movements led to the formation of many esoteric schools of Hinduism and Buddhism. It has influenced the Hindu, Sikh, Bön, Buddhist, and Jain religious traditions and spread with Buddhism to East Asia and Southeast Asia.".....White, David Gordon (ed.) (2000). Tantra in Practice. Princeton University Press. p. 7. ISBN 0-691-05779-6.

Padmasambhava....The site of His Holiness the Karmapa wrote, “If born in the year 732, then he would have been 54 years of age when he made the difficult journey into the Land of Snow” - a moment in history that denotes the first coming of Buddhism to the Himalayan region. Furthermore, “One may conclude that a major reason for so many Indian Buddhist sages coming to Central Tibet from Kashmir, and notably, the famous Padmasambhava from Uddiyana (Bactria), was the simple fact that Tibet then ruled much of this region. Nothing is really reported concerning Padmasambhava’s life in Kashmir. He lived, some say, with wandering yogis and sadhus, in exile from his homeland. Others report that it was during this period that he acquired knowledge and skill in various crafts. In Kashmir he earned the name Sthiramati, ‘the Youthful Genius.’

Kashmir Shaivism was a householder religion based on a strong monistic interpretation of the Bhairava Tantras (and its subcategory the Kaula Tantras), which were tantras written by the Kapalikas.

The Kāpālika tradition was a non-Puranic, tantric form of Shaivism in India, whose members wrote the Bhairava Tantras, including the subdivision called the Kaula Tantras. These groups are generally known as Kāpālikas, the "skull-men," so called because, like the Lākula Pāsupata, they carried a skull-topped staff (khatvanga) and cranium begging bowl. Unlike the respectable Brahmin householder of the Shaiva Siddhanta, the Kāpālika ascetic imitated his ferocious deity, and covered himself in the ashes from the cremation ground, and propitated his gods with the impure substances of blood, meat, alcohol, and sexual fluids from intercourse unconstrained by caste restrictions. The Kāpālikas thus flaunted impurity rules and went against Vedic injunctions. The aim was power through evoking deities, especially goddesses.

The early Buddhist tantric yogins and yoginis adopted the same goddess or dakini attributes of the kapalikas. These attributes consisted of; bone ornaments, an animal skin loincloth, marks of human ash, a skull-cup, damaru, flaying knife, thighbone trumpet, and the skull-topped tantric staff or khatvanga.

The kapalikas may also have been related to the Kalamukhas ("black faces") of medieval South India (Lorenzen 1972). .... center their secretive rituals around an object known as a kapparai (Tamil "skull-bowl," derived from the Sanskrit kapala), a votive device garlanded with flowers and sometimes adorned with faces, which is understood to represent the begging-bowl of Shiva (Meyer 1986).

Beer (2003: p. 102) relates how the symbolism of the khatvanga that entered esoteric Buddhism was a direct borrowing from the Shaivite kapalikas who frequented places of austerity such as charnel grounds as a form of left-hand path (Sanskrit: vamamarga) spiritual practice (Sanskrit: sadhana):.....The form of the Buddhist khatvanga derived from the emblematic staff of the early Indian Shaivite yogins, known as kapalikas or 'skull-bearers'. The kapalikas were originally miscreants who had been sentenced to a twelve-year term of penance for the crime of inadvertently killing a Brahmin. The penitent was prescribed to dwell in a forest hut, at a desolate crossroads, in a charnel ground, or under a tree; to live by begging; to practice austerities; and to wear a loin-cloth of hemp, dog, or donkey-skin. They also had to carry the emblems of a human skull as an alms-bowl, and the skull of the Brahmin they had slain mounted upon a wooden staff as a banner. These Hindu kapalika ascetics soon evolved into an extreme outcast sect of the 'left-hand' tantric path (Skt. vamamarg) of shakti or goddess worship. The early Buddhist tantric yogins and yoginis adopted the same goddess or dakini attributes of the kapalikas. These attributes consisted of; bone ornaments, an animal skin loincloth, marks of human ash, a skull-cup, damaru, flaying knife, thighbone trumpet, and the skull-topped tantric staff or khatvanga.

The origin and development of the Tantras as a special class of literature and as a special mode of sadhana are ultimately connected with the rise of Saivism, and the Pancaratra, the ancient Samkhya-Yoga supplying them with a philosophical background...The Shakta orientation of Tantric culture had become firmly established by the 13th Century. The Sammoha Tantra deals with various traditions and mantras, the geographic classification of the Tantras (into four areas -- Kerala, Kashmira, Gauda and Vailasa), and a detailed account of the Vidyas or cults belonging to different ..

In the Shakta Tantras, the nerve on the right (Upaya of the Buddhists) is known as the pingala, and that of the left (Prajna of the Buddhists) as ida. These two represent the principle of duallity, and the middle one (variously known as susummna, avadhutika or sahaja) represents absolute unity......The Kundalini Shakti is the original Female Principle, the Devi, whom the aspirant has to send from the lower extremity of the spinal cord to the highest cerebral point where she meets Shiva, and their union produces the liquor of immortality. Wine is the nectar which flows from the union of the Kundalini Shakti with Shiva at the Sahasrara in the head. Maithuna, one of the five tattvas, symbolized by the concept of unity behind all duality, is brought into harmony with the concept of the union of Shiva and Shakti, which takes place in the sahasrara....... (Excerpted from Bhattacharyya, Narendra Nath, "The Indian Mother Goddess," 2nd Edition. South Asia Books, New Delhi, 1977.)

"Abhinavagupta (Kashmiri: अभिनवगुप्त) (Urdu: ابھینوگپتا ‎) (c. 950 – 1020 ADwas one of India's greatest philosophers, mystics and aestheticians. He was also considered an important musician, poet, dramatist, exegete, theologian, and logician - a polymathic personality who exercised strong influences on Indian culture. He was born in the Valley of Kashmir in a family of scholars and mystics and studied all the schools of philosophy and art of his time under the guidance of as many as fifteen (or more) teachers and gurus. In his long life he completed over 35 works, the largest and most famous of which is Tantrāloka, an encyclopedic treatise on all the philosophical and practical aspects of Trika and Kaula (known today as Kashmir Shaivism). Another one of his very important contributions was in the field of philosophy of aesthetics with his famous Abhinavabhāratī commentary of Nāṭyaśāstra of Bharata Muni.....http://en.wikipedia.org/wiki/Abhinavagupta

"This also explains why sadhanas used in Shaivism are similar (or the same) to those used in the Inner Tantras or Atiyoga. They're triggering the same visionary process within different contexts or ways of seeing.".....http://www.mail-archive.com/fairfieldlife@yahoogroups.com/msg232965.html

"The second stream of modern Kashmir Shaivism was inspired by Swami Muktananda Paramahamsa (1908-1982) who toured the world teaching the principles of Shaivism. Since his approach focused heavily on sadhana and spiritual experience it can be called the revelatory. Lakshmanjoo approached Shaiviam via knowledge first, then experience; Muktananda’s Shaivism began with experience and then found understanding in the Shaivite scriptures. Muktananda had a significant impact among thousands of spiritual seekers because he transmitted the experience of Shaivism through the spiritual awakening of shaktipat. There is no doubt that he achieved the widest dissemination of Shaivite learning in history, both in his own work and in the still growing impact of his students." 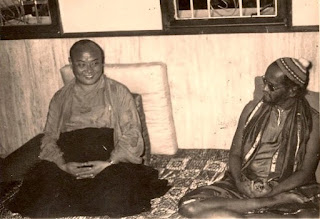