"Gaius Plinius Secundus (AD 23 – August 25, AD 79), better known as Pliny the Elder, was a Roman author, naturalist, and natural philosopher, as well as naval and army commander of the early Roman Empire, and personal friend of the emperor Vespasian. Spending most of his spare time studying, writing or investigating natural and geographic phenomena in the field, he wrote an encyclopedic work, Naturalis Historia, which became a model for all other encyclopedias." 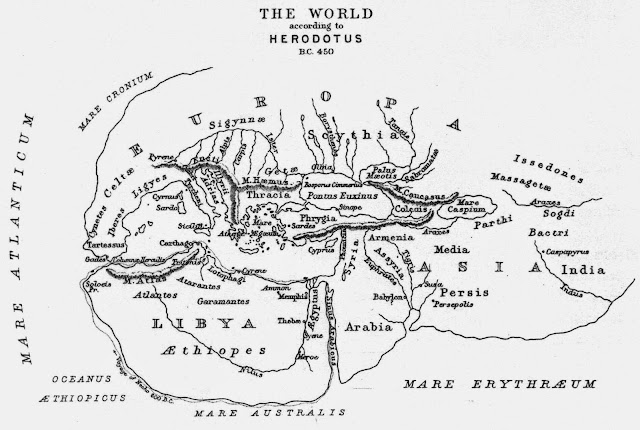 GAIUS PLINIUS SECUNDUS—usually called Pliny the Elder North of Italy. He was born at Como in AD 23.

The subject of Books III-VI is the geography, physical, poHtical and historical, of the ancient world....... Book VI : Countries from the Black Sea to India; Persia ; Arabia ; Ethiopia ; the Nile valley.

"Balkh, is the name given to Zariasta....town is Zariasta, which was afterwards called Bactra, from the river.'.....

while on this side of the Sideris are the rivers Maziris and Straor, all three streams rising in the Caucasus. Next comes the Margiane country, famous for its sunny climate — it is the only district in that region where the vine is grown ; it is shut in all round by a beautiful ring of mountains, 187 miles in circuit, and is difficult of access on account of sandy deserts stretching for a distance of 120 miles ; and it is itself situated opposite to the region of Parthia. In Margiane Alexander had founded a city " bearing his name, which was destroyed by the bar- barians, but Antiochus son of Seleucus re-estab- hshed a Syrian city on the same site, intersected by the river Murghab, which is canaUzed into Lake Zotha ; he had preferred that the city should be named after himself. Its circuit measures 8| miles. This is the place to which the Roman prisoners taken in the disaster * of Crassus were brought by Orodes. From the heights of Merv across the ridges of the Caucasus right on to the Bactrians extend the fierce tribe of the Mardi, an independent state.....BOOK VI. xviii. 46-48

Alexandria in Margiane, which was in fact a Seleukid foundation called Antiokheia

http://depts.washington.edu/silkroad/texts/hhshu/notes17.html.... Beyond [the Bactri centred at Zariasta or Balkh] are the Sogdiani and the town of Panda, and on the farthest confines of their territory Alexandria

Pliny NH (b) (VI. XVIII) describes Sogdiana as an independent entity:
“Beyond [the Bactri centred at Zariasta or Balkh] are the Sogdiani and the town of Panda, and on the farthest confines of their territory Alexandria [= modern Khujand], founded by Alexander the Great. At this place there are altars set up by Hercules and Father Liber, and also by Cyrus and Samiramis and by Alexander, all of whom found their limit in this region of the world, where they were shut in by the river Syr Darya, which the Scythians call the Silis and which Alexander and his soldiers supposed was the Don.... Beyond are some tribes of Scythians....”