"Rishi (Sanskrit: ṛṣi, Devanagari: ऋषि) originates from the ancient Hindu culture of the Indus region earth-based cultures. Rishis were the scribes of the large body of nature hymns and spiritual science known as the Vedas….A Rishi (or rishika, when referring to female rishis) is a sage of insight, one who practices self-cultivation as a Yogini or Yogi and attains asamprajñata Samadhi. A person through Yogic concentration first attains samprajñata samadhi (realisation of the independence of soul and body, Atma and Prakriti) and with continued effort attains asamprajñata samadhi (realisation of oneness with all). The Rishi's soul is interpreted as imbibing wisdom directly from the universal source. Vedic hymns are sermons conceived as delivered by divine inspiration by the rishis."….http://en.wikipedia.org/wiki/Rishi 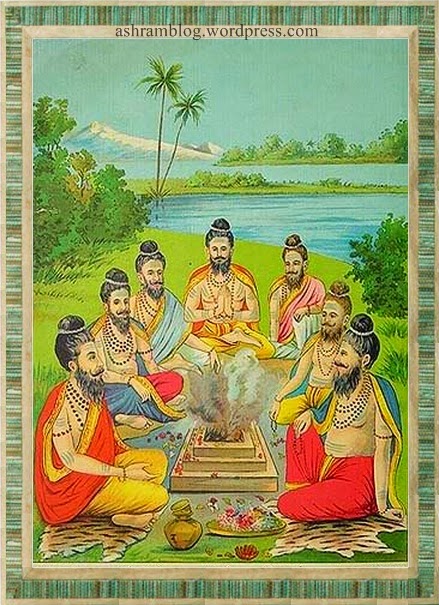 "What keeps Kashmiri mystics firmly anchored in the Indian soil is their meditative technique. By and large they use variations of pas-e-anfaas(watching the breath). This is similar to various techniques of pranayama widely practised in India's Hath-Yoga traditions. These meditative techniques were being practised initially by the Shaivaite yogis of Kashmir before the advent of Islam….."….http://www.jammu-kashmir.com/insights/insight990901.html

The Rishi order of Kashmir is a Sufi tradition associated with religious harmony. Many of the saints held dear by Kashmiris to this day were Sufi Rishis. The original Rishis include Sheikh Noor-ud-din Wali also known as Nund Rishi. The Rishi order has made an important contribution to Kashmiriyat, the ethnic, national, social and cultural consciousness of the Kashmiri people, as well as a distinctive contribution to global Islam. The 17th-century poet Baba Nasib sums up the impact of the Rishi order thus: "The candle of religion is lit by the Rishis, they are the pioneers of the path of belief. The heart-warming quality of humble souls emanates from the inner purity of the hearts of the Rishis. This vale of Kashmir, that you call a paradise, owes a lot of its charm to the traditions set in vogue by the Rishis."….Kashmiris use the Hindu epithets Rishi or Baba to describe these Sufi saints. The Shaivite yogini Lal Ded was a key influence on Nund Rishi, and is said to have suckled him at her breast when he was an infant. Sufi Rishis were certainly aware of yogic practices, as evidenced by the poet Shams Faqir's praise of Lal Ded: "Lalla achieved the fusion of her vital air and ether, and thus realized God." However, the Sufi Rishis made an effort to clearly distance themselves from certain Hindu practices. Some were farmers, and Nund Rishi himself is said to cultivated land in order to demonstrate the spiritual and social importance of manual labour, abhorred by the Brahmins.

"The most dominant influence on the Kashmiri Muslims, in terms of their Kashmiriyat, is that of the Rishi order of Sufis. While the Sufi orders like the Suharwardi, Kubravi, Naqshbandi and Quadri, arrived in Kashmir from Persia, Central Asia, and Central and North India, the Rishi order evolved in the valley itself indigenously in the beginning of the fifteenth century. The Kashmir valley was already permeated with the traditions of Hindu ascetism and Buddhist renunciation."….http://www.jammu-kashmir.com/insights/insight990901.html

"The term `Rishi' itself is clearly a derivation from Sanskrit and Indian traditions, though some Medieval Muslim scholars have tried to show that it is derived from the Persian word raish or rish meaning the feathers or wings of a bird. Baba Dawood Mishkati, for instance, gives a rather tortuous explanation. A bird whose feathers have been removed has no control over its own movements and depends entirely on the wind. And this is also the case with a Rishi; he is alienated from the world and lives alone, buffeted by fate. This and similar explanations, have, however, failed to impress the average Kashmiri Muslim and he, by and large, accepts its Sanskrit derivation and uses it loosely like his Hindus brethren as synonymous for a sage. In fact many Kashmiris do not even associate the word with any particular order of sufis, but use the word to denote any and every sufi saint."….http://www.jammu-kashmir.com/insights/insight990901.html

" "The most respected class of people in this country (Kashmir) are the Rishis. Although they have not abandoned the traditional and customary forms of worship (taqlid), but they are true in their worship. They do not denounce men belonging to different faiths. They do not have the tongue of desire, and do not seek to obtain worldly objects. They plant fruit-bearing trees in order that people may obtain benefit from these. They abstain from meat and do not marry."…. Abul Fazl….http://www.jammu-kashmir.com/insights/insight990901.htm

"…whereas the sufis were on the margins of society in other places, in Kashmir they were the dominant influence."…http://www.jammu-kashmir.com/insights/insight990901.html

"….In the Vedas, the word denotes an inspired poet of Ṛgvedic hymns, who alone or with others invokes the deities with poetry. In particular, Ṛṣi refers to the authors of the hymns of the Rigveda. Post-Vedic tradition regards the Rishis as "sages" or saints, constituting a peculiar class of divine human beings in the early mythical system, as distinct from Asuras, Devas and mortal men."…..http://en.wikipedia.org/wiki/Rishi

"…Numerous great yoginis and female mystics are mentioned in the Vedas; in fact, many of the vedic rishis were yoginis, rishikas…"…Daughters of the Goddess: Women Saints of India, by Linda Johnsen PhD., Yes Int'l Publishers, 1994, pg. 9.

"…In the Kalachakra…..there is an event which shows that this country was not entirely free of historical conflict. This concerns the protest of a group of no less than 35 million (!) Rishis (seers) led by the sage Suryaratha ("sun chariot”). As the first Kulika king, Manjushrikirti, preached the Kalachakra Tantra to his subjects, Suryaratha distanced himself from it, and his followers, the Rishis, joined him. They preferred to choose banishment from Shambhala than to follow the “diamond path” (Vajrayana)…….The Rishis worshipped only the sun. For this reason they also called their guru the “sun chariot” (suryaratha). But the Kulika king had as Kalachakra master and cosmic androgyne united both heavenly orbs in himself. He was the master of sun and moon." ….. (Bernbaum, 1980, p. 234).

"The purpose of the Vajra Caste was not force everyone to convert to Buddhism but for people to re-discover the purity of their own traditions. The Kalachakra empowerment is given to anyone who wishes to participate. No one is asked to give up their own religion. The Kalachakra, open to all who wish to participate, has the power to benefit all beings on this planet."...https://collab.itc.virginia.edu/access/content/group/9f340e95-f808-4bc0-80bc-b23bcadd072e/copyrighted%20pdfs%20of%20texts/newmanbriefhistorykalachakra.pdf